Happy father. Devoted religious man. Successful hotelier. None of the above?

It all began with a rudimentary poster on a light post,” says Toronto Sun reporter Mark Bonokoski. Missing from the then-seedy Dundas and Jarvis neighbourhood was 40-year-old Mohmud “Moe” Jiwani, a Ugandan-born Oakville businessman, last seen on April 10, 2006. “I started right there. Curiosity got to the cat.”

The unfolding story, as Bonokoski described it, proved “curiouser and curiouser.” Hotelier Jiwani, supposedly happily married for 18 years and a devoted father of two, was expected home following a business meeting at a Chinese restaurant in Toronto. Instead, witnesses placed him at Filmores—self-proclaimed as “Canada’s premier gentleman’s club” with adjoining hotel—drinking heavily and flashing bills at dancers. At 6:50 a.m., Jiwani made a cash withdrawal from a nearby convenience store, parked his Mercedes in a Dundas parking lot, and vanished.

Following the police’s discovery of the car, with Jiwani’s wallet and cellphone inside, his wife, Laila, spoke briefly with the media. “He is a religious man,” she told Bonokoski, denying rumours of drugs, gambling or bad debts. “He is not the type of man to fall off the face of the Earth.”

But as it turns out, he was; Jiwani had disappeared before. Two years prior, explains Det. Alistair Watt of the Halton Regional Police, Jiwani had been reported missing from Niagara Falls (the site of two of Jiwani’s four hotels; the others were in London and Winnipeg). He was located days later in Hamilton’s Sandbar Tavern, a now-defunct crack den well known to local police, who described Jiwani in their report as a heavy user of crack cocaine. This situation, says Watt, may explain why it took four days, this time, before Jiwani was reported missing.

“There is no similarity,” said Laila Jiwani of her husband’s first and second disappearance.

Police agree, says Watt, that “there’s nothing that indicated he was using drugs at the time.” But it was too late; contrary to being a loyal family man, a new image of Jiwani was forming as a drug-addicted, strip-club frequenter gallivanting about with a secret—he was deeply in debt. His Oakville home, a gated waterfront mansion, carried a $3.6-million mortgage. Just weeks earlier, he had visited Mumbai (where his family resides) via London (where he operated a gas station business and owned several properties). Could the trips have been something other than business? Was Jiwani plotting his disappearance and setting foundations for a new life?

Back in Toronto, however, the case got curiouser again. On April 26, someone demanding an $80,000 ransom contacted the Jiwani family. With Moe’s business partner, Ataf Mohamed, Laila met and paid two men in a Rexdale parking lot—without contacting police. The two men—later revealed to be con artists—were eventually arrested and charged, but never convicted. The $80,000 was never recovered, nor did Moe Jiwani’s body ever turn up. There has been no further movement or activity on any of Jiwani’s bank accounts.

Eight months after her husband’s appearance, Laila Jiwani appeared on CTV. “Somebody’s hiding something. Somebody out there knows what happened to my husband,” she said. That somebody may be Moe himself. “If you’re out there and watching this, please call us and let us know you’re okay,” she said. (No word on what she believes now; Laila Jiwani declined to be interviewed for this story.)
Eight years later, police have no leads and no developments, just hypothetical situations. “If he went somewhere else in the world, he’s done a fantastic job at disappearing,” says Det. Watt. “And if it was murder, I would expect it was organized. To get rid of a body altogether is very professional.”

Moe Jiwani has since been quietly declared dead, giving his wife access to assets and allowing her to list their Oakville home for almost $5 million. Bonokoski retired without ever getting an end to his story, but his curiosity hasn’t ceased. “Even today when I hear a body’s been found in the west end or Mississauga, I wonder if it’s finally Moe Jiwani.” 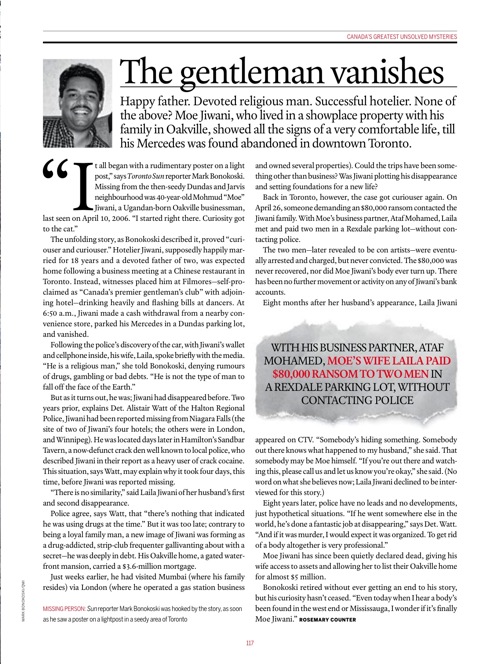 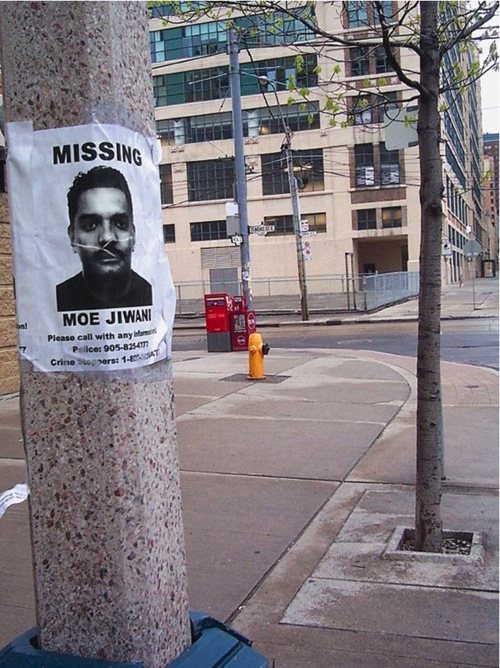