The line between colleges and universities is blurring. How to figure out which is right for you.

A generation ago, the division between college and university was clear. “The older thinking—and there’s still some of that out there—just streamed students into academic or applied courses,” says Ken Steele, co-founder of Academica Group Inc., a research-based marketing consultancy in London, Ont., focused on higher learning. Grades still matter, but these days—as the outdated hierarchy of academic versus applied learning crumbles—so do countless other factors: tuition, location, experience, job prospects. So for unsure high school grads entering post-secondary education, how do you decide which path is for you?

First, consider your GPA. “Grades are black and white—either you have them or you don’t,” says Connie Easton, a high school counsellor in Richmond, B.C., who sits on the British Columbia School Counsellors Association. Most universities impose a 67 per cent minimum, but the number is always in flux. “It’s consumer demand. Admission standards depend on the number of kids applying and the average GPA.” Some students may luck out with a C-plus, but probably not. “You usually need to be in the upper 80s to be competitive,” she says, but you can bump up your application with life experience and leadership skills.

Independent, self-directed learners are a good fit for university, which offers a broad, comprehensive education through four-year undergraduate degrees in general areas (sciences, humanities, business). Many include professional programs, such as law or med school. While every program and school is different, says Herb O’Heron, Director of Research at the Association of Universities of Canada, “a student going to university is making a longer-term commitment to themselves. They go in with the idea that there’s a lot of time to understand and improve themselves.”

Colleges, meanwhile, offer shorter-term certificate and diploma programs with a focus on practical—and often regional—job training. “A lot of college students want to go, get out, and get to work as soon as possible,” says O’Heron. To facilitate faster learning, colleges are “more interactive, more instructive and project-based,” says Easton. And another big selling point: “[Most colleges] operate on a first-come, first-served basis,” she says. If you satisfy the basic requirements, you’re in.

It’s a much easier leap for younger students, some graduating as young as 16, who are used to small classes and a teacher who notices if you’re absent. If you live at home, college will likely feel more familiar. “Many students prefer the experiential hands-on learning that they get at college rather than the theoretical learning they’d get at university,” says Steele.

But for those looking for a bigger change, a possible move and greater academic challenges, university is probably your ticket to a new life. “In university, more people live on campus, so there are more student services and cultural events,” says Easton. None of it is free, however, and Canadian undergraduate students paid an average of $5,581 in tuition fees in 2012. That’s up five per cent from the year before, and doesn’t include living expenses, which can easily soar to $10,000 for on-campus housing. Community college fees range from $1,800 to $3,700.

Unsure dabblers, providing they’ve got the grades, often opt for a broader university degree that leaves more time and space to experiment before settling on any field in particular. “But the flip side of that coin,” explains Humber’s VP academic Michael Hatton, “is that college offers short programs; if you don’t like it, you’ve only invested a year or two.” And these days, as the division between college and university becomes increasingly blurred, moving from one to the other and back again isn’t a mistake—it’s the norm. Many colleges now offer degree programs, and college diplomas can sometimes count toward a university degree.

As stressful as choosing a post-secondary school may feel, remember that any staunch divide between colleges and university is long gone. “At this point, there is a mosaic of pathways to any profession from various credentials and various institutions,” says Hatton. Diplomas can be upgraded to degrees, and degrees are topped up with diplomas. “For 10 years, we’ve been focused on building these pathways from diplomas to degrees to post-grad and back again,” he says.

Nicola Valley Institute of Technology (Merritt and Burnaby, B.C.)—Environmental Resources Technology
Formed in 1983, B.C.’s Aboriginal post-secondary institute offers a new two-year program to train First Nations students to work in the fishery, environmental assessment, mining, grassland ecology and forestry sectors. The latter is especially opportune; last September, the B.C. government committed $250,000 for scholarships to allow as many as 10 students to take the First Nations forestry training technician program offered at other colleges in the province.

Medicine Hat College (Medicine Hat, Alta.)—Environmental Reclamation Technician
Graduates of Medicine Hat College’s two-year environmental reclamation technician program are doing the opposite of their counterparts in mining programs, who are learning to extract from the earth: they study surveying, mapping, assessment and monitoring in order to return disturbed lands—from mining, oil drilling, gas extraction, transportation or logging—to their natural state.

The Northern Alberta Institute of Technology (Edmonton)—Nanotechnology
Nanotechnology—a merging of physics, biology and chemistry to manipulate atoms and molecules—is an emerging sector in Canada; Alberta has been a major player since unveiling its investment strategy in 2007. The Northern Alberta Institute of Technology launched Canada’s first diploma in nanotechnology in 2010, a two-year program catering to more than 40 companies in and around Edmonton.

Northern Star College (Edmonton)—Hypnotherapy Certificate
Hypnotherapy isn’t for just hippies and mystics—it’s increasingly used in Canada for weight loss, smoking cessation, migraine treatment and as a therapy aid. Believers can start with a one-year certificate in hypnotherapy, which includes classes on essences and energy, systemic constellation, and self-hypnosis.

Lethbridge College (Lethbridge, Alta.)—Power Line Technician
Program Electricity experts say most of Canada’s infrastructure needs to be expanded or replaced—especially in Alberta, the country’s largest producer of energy, where 4,000 new skilled technicians will be required in the next five years. Since this January, Lethbridge’s progressive, up-to-date program (in partnership with the City of Lethbridge, Alta., Link and Rockstad Power Corp.) provides hands-on and theoretical training for the burgeoning field.

Steinbach Bible College (Steinbach, Man.)—Certificate of Ministry Studies
Ministers of tomorrow can study from a distance with Steinbach Bible College’s new online learning program. More than 30 fully transferable online courses—in the areas of Bible/theology, arts and sciences, and ministry—can count toward a certificate, diploma or even a Bachelor of Arts.

Humber College (Toronto)—Bachelor of Journalism
Journalism-bound students looking for a career in Toronto’s media scene can skip the traditional university route with Humber’s renowned four-year bachelor’s degree program. A broad first year is followed by a second-year specialization in one of four media facets: Humber runs a full television studio and radio station, as well as newspapers and magazines.

St. Lawrence College (Kingston, Ont.)—Culinary
A revival in eastern Ontario’s artisanal cheese industry is creating new demand for culinary students who, through collaborations with students in biotechnology and business, are becoming lab researchers assisting local cheese makers. With the support of Ontario’s Ministry of Agriculture, St. Lawrence is researching not just taste and texture, but market needs and opportunities, as well as innovations in business processes.

LaSalle College (Montreal)—Technical Clothing Designer
For fashionistas looking to showcase their creations in Montreal’s fashion scene, the International School of Fashion, Arts and Design at LaSalle College offers a one-year program in technical clothing—that is, high-performance snowboard, ski and scuba apparel. Students are trained from conceptualization to design of this high-value niche product that caters to Quebec’s sports scene.

Durham College (Oshawa, Ont.)—Web Applications for Mobile Commuting
Good or bad, a 2012 Rogers Communications survey found 65 per cent of us feel “naked” without our smartphones. But it’s very good news for savvy web developers, who might try this new graduate certificate (beginning in September 2013), where experienced working computer buffs can amp up their Apple and Android programming skills for use on new websites, apps, and whatever cutting-edge social media are next.

Holland College (Summerside, P.E.I.)—Wind Turbine Technician
The global market for wind energy—sustainable and fuel-free, with no greenhouse gas emissions—is expanding faster than any other source of electric energy, and P.E.I. is emerging as one of the most progressive renewable energy leaders in North America. Holland College is preparing workers with its wind turbine technician program at its Summerside location, ripe with strong gusts to keep the windmills spinning.

College of the North Atlantic (multiple campuses, Newfoundland)—Emergency Management Education
Beyond the coast’s obvious natural disasters—hurricanes, snowstorms and flooding caused by the unruly Atlantic—government agencies have been expanding their emergency and contingency plans since 9/11. Graduates of the emergency management education program, with the help of cutting-edge 3D technology at the Manufacturing Technology Centre, will be prepared for any number of worst-case scenarios.

Yukon School of Visual Arts (Dawson City, Yukon)—Visual Arts
A renewed art initiative merges the Yukon School of Visual Arts with the Tr’ondëk Hwëch’in, or People of the River, who have resided along the Yukon River for millennia. The progressive and holistic visual arts program, with a mandate to support First Nations arts and practices, is widely accepted across the whole country; it’s accredited at Emily Carr, OCAD, ACAD and more.

Aurora College (Yellowknife)—Introduction to Underground Mining
Settled in the ’30s after the discovery of gold, Yellowknife eventually shifted from a mining town to a government centre—until the mid-’90s diamond boom prompted the Northwest Territories to return to its roots. De Beers’ fourth mine, the Gahcho Kue, is currently in production, and the region will be ready: Aurora College’s community-based introduction to underground mining includes a “Ready to work North” course, which students fast-track through in just six weeks.

Yukon College (Whitehorse)—Mineral Resources
Nature lovers flock to remote field camps to learn mineral exploration and mining in the vast Canadian wilderness. Students explore the terrain of the territory and the world of mining through a mixture of office and fieldwork before entering the workforce, where mineral resource grads are well paid and highly sought after. 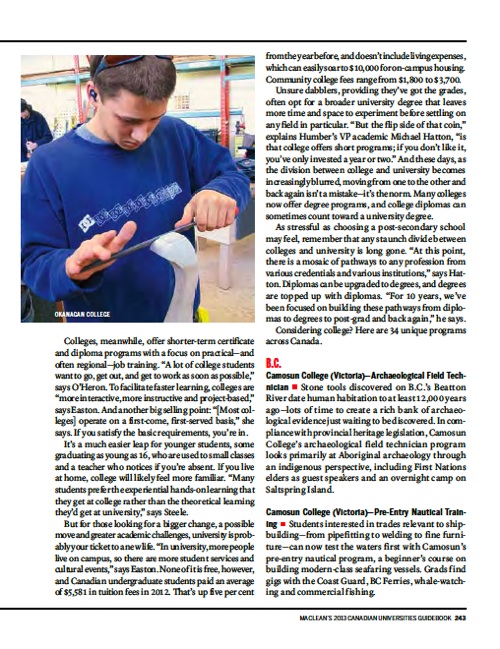 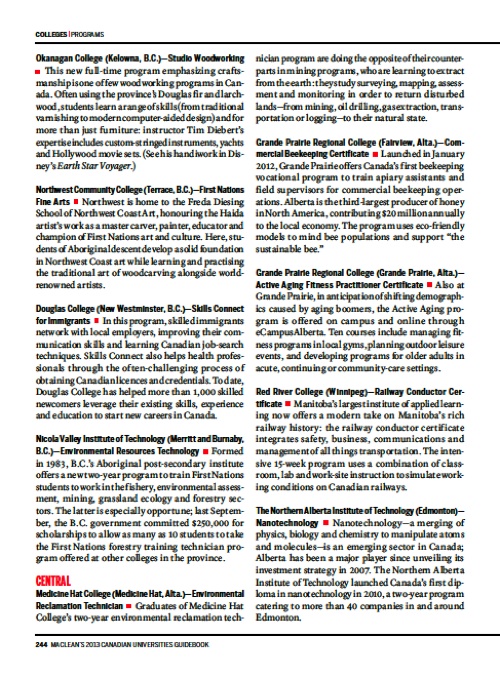