But what they might not know is that “colleges have a more complex mandate than universities because they balance the academic interests of students with the local workforce projection of their region,” he says.

Fifty per cent of college applicants (about 100,000 students) plan to commute to a local college, says Steele, explaining why these schools invest time and money in advisory panels that analyze the local industrial employment market. So “there’s no real sense that you need to travel,” explains Steele. Which is to say, depending on where you live, your dream job might be in your own backyard. Here are 25 programs that do their regions proud:

Northwest Community College (Terrace, B.C.)—Sustainable Tourism
When BC Tourism estimated 84,000 new tourism jobs by 2015, Northwest Community College added Sustainable Tourism to the syllabus for the September 2010 semester. Besides tourism, the program focuses on promotion and protection of the local ecosystem and culture—Terrace is the home to 14 Tsimshiam tribes.

The College of the Rockies (Cranbooke, B.C.)—Birth Doula Studies (online)
Though some provinces still don’t have the legislation, midwifery has been regulated and provincially funded in British Columbia since 1998. As interest in midwives and doulas continues to grow across the province and the country, an online Birth Doula Studies Program is now offered at the College of the Rockies.

Douglas College (New Westminster, B.C.)—Skills Connect for Immigrants
To accommodate increasing immigration to the West Coast, Douglas College introduced the Skills Connect for Immigrants program in 2007. Skilled immigrants learn the “Canadian-style” job search, how to get proper credentials in their field, and English as a second language. B.C.’s immigration rate is second only to Ontario, where George Brown College offers comparable courses for new Canucks.

Aurora College (Yellowknife, N.W.T.)—Introduction to Underground Mining
Settled in the ’30s after the discovery of gold, Yellowknife eventually shifted from a mining town to a government centre—until the mid-’90s diamond boom caused the Northwest Territories to return to its roots. De Beers’ fourth mine is expected to reach full production by 2012, and the region will be ready: Aurora College’s community-based Introduction to Underground Mining includes a “Ready to work North” course, where students fast-track through in just six weeks.

Grand Prairie Regional College (Grande Prairie, Alta.)—Older Adult Fitness and Wellness
Also at Grande Prairie, in anticipation of shifting demographics caused by aging boomers, a new specialization was introduced in 2009. Older Adult Fitness and Wellness, a personal-training tangent that includes nutrition and pharmacology as well as CPR and first aid, is designed to promote health and fitness for older clients, ranging in ability and mobility from active to frail.

The Northern Alberta Institute of Technology (Edmonton, Alta.)—Nanotechnology
Nanotechnology—a merging of physics, biology and chemistry to manipulate atoms and molecules—is an emerging sector in Canada; Alberta has been a major player since unveiling their investment strategy in 2007. The Northern Alberta Institute of Technology launched Canada’s first diploma in Nanotechology last year, a two-year program catering to more than 40 companies in and around Edmonton.

LaSalle College (Montreal, Que.)—International School of Fashion, Arts and Design
For fashionistas looking to showcase their creations in Montreal’s fashion scene, the International School of Fashion, Arts and Design at LaSalle College offers a program in Textile Embellishment. Taken alongside the fashion design degree, the certificate includes classes in cutting-edge fabric technology, including textile creations, ornamentation, treatments and computer techniques.

Holland College (Summerside, P.E.I.)—Wind Turbine Technician
The global market for wind energy—sustainable and fuel-free, with no greenhouse gas emissions—is expanding faster than any other source of electric energy, and P.E.I. is emerging as one of the most progressive renewable energy leaders in North America. Holland College is preparing workers with its Wind Turbine Technician program at its Summerside location, ripe with strong gusts to keep the windmills spinning.

College of the North Atlantic (multiple campuses, Nfld.)—Emergency Management Education
Besides the coast’s obvious natural disasters—hurricanes, snowstorms and flooding caused by the unruly Atlantic—government agencies have been expanding their emergency and contingency plans since 9/11. Graduates of the upcoming Emergency Management Education program at the College of the North Atlantic will be prepared for any number of worst-case scenarios—and not just preparedness and response, but prevention as well.

Nova Scotia Community College (multiple campuses, N.S.)—Fishing Master Certification
The second-smallest Canadian province exports a whopping $1 billion in fish to 90 countries around the world. To keep up with the demand, Nova Scotia Community College’s School of fisheries offers a fishing Master Certification, teaching everything from boating safety to fish-harvesting technology. 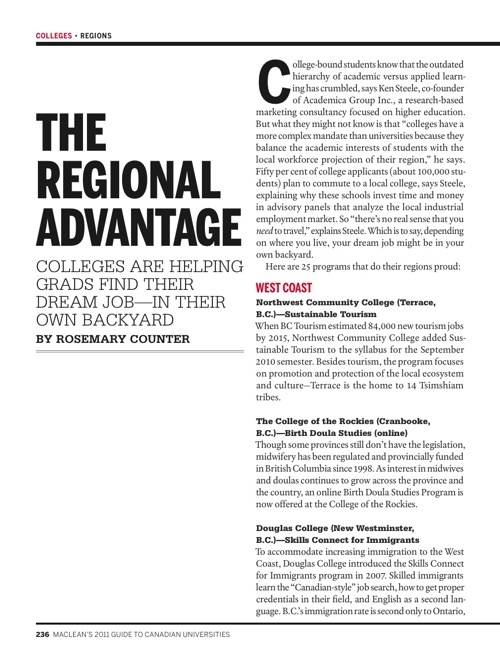 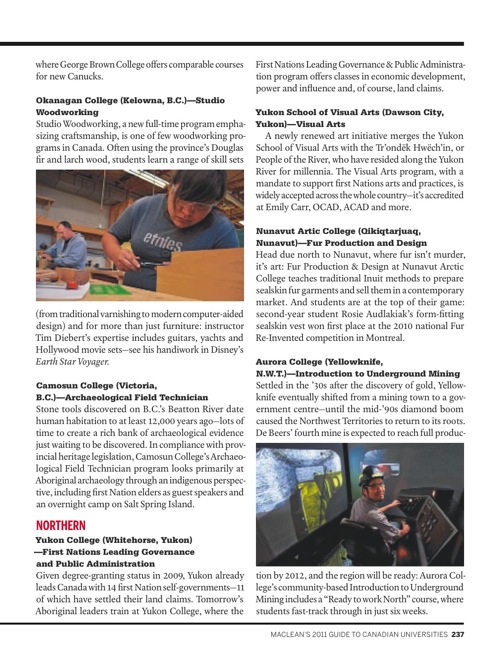 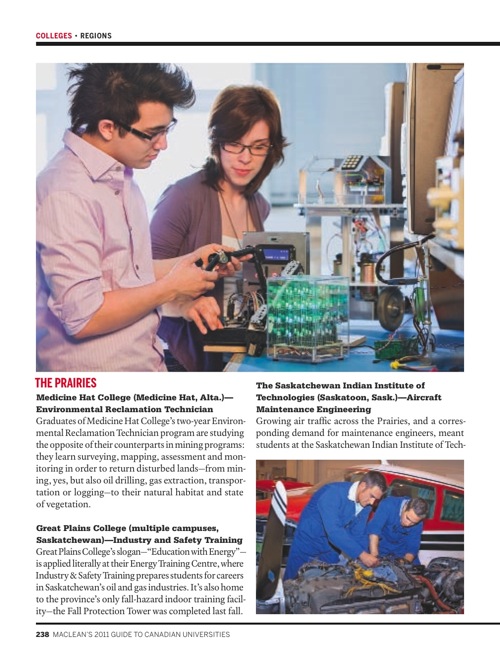