The Shades of Grey Effect

A full 14 agents rejected On the Island, the May–December romance novel by Tracey Garvis Graves, an aspiring but unpublished writer from Iowa. “All form rejections—no one even read it,” she says. Disappointed, but still convinced the book had potential, Graves reluctantly decided to self-publish. She’s glad she did.

Just a few years ago, self-publishing (a.k.a. “vanity publishing”) was an embarrassing last resort for writers unable to secure a “real” book deal. For most, self-publishing revenue remains humble; one survey found that half of all self-published authors bank less than $500 for their efforts. But for a lucky few, it can be a path to superstardom.

Much as J. K. Rowling inspired a generation’s worth of wizard stories, James’s coattails are dragging a slew of similar titles taking the same new route to bestseller. Sylvia Day’s Bared to You reached No. 4 on the New York Times bestseller list, and Kelly Favor’s For His Pleasure currently sits at No. 12 on Kobo’s Canadian Top 50 chart. And publishers are finally paying attention.

“This was the first time we saw self-publishing turn into an audition for commercial prime time,” says Nathan Maharaj, director of merchandise at Kobo, which recently launched Kobo Writing Life, a self-publishing e-book service for aspiring writers that Maharaj’s team closely monitors for “opportunities that are worth mainstream attention.”

For Graves, who uploaded On the Island to Amazon last September, that moment came in March when the online seller included her in its deal promotions. “At that point, I’d been selling maybe 25 a day,” says Graves. “A month later, it had exploded to up to 5,000.”

There are many reasons e-books, since their inception, have gone hand in hand with erotica: the genre already weighed heavier online than in the print world, e-books are cheap to make for a ravenous and predictable reader, and of course, subtlety. “On a Fifty Shades scale, those people who wouldn’t buy it in person is not insubstantial,” says Maharaj.

When risk is reduced, traditional publishers are quick to hop on the bandwagon. This isn’t a desperate attempt to stay relevant, says Maharaj, but a new use for an old industry: “Commercial publishing still has the working capital to produce a gigantic print run and spin up a marketing campaign.”

Graves, having already hit the Times bestseller list and sold movie rights to MGM, saw her conventional book deal finally come along in June. “It wasn’t easy to work so hard, to be so passionate about something, and be completely rejected by the very channel you need,” Graves says. “I’m just so fortunate there are new channels available.” 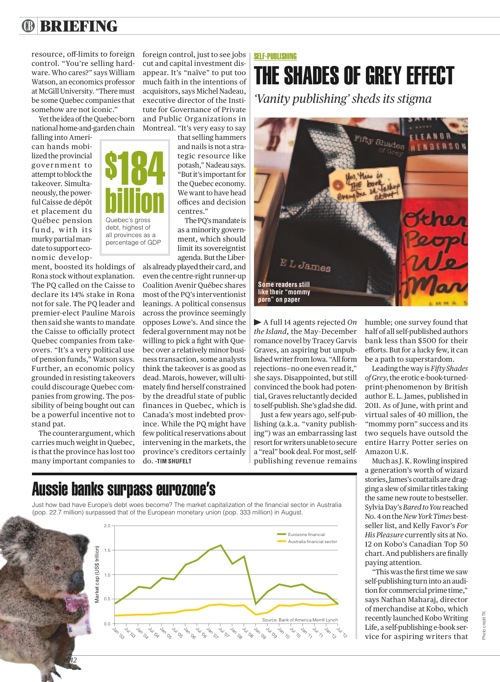 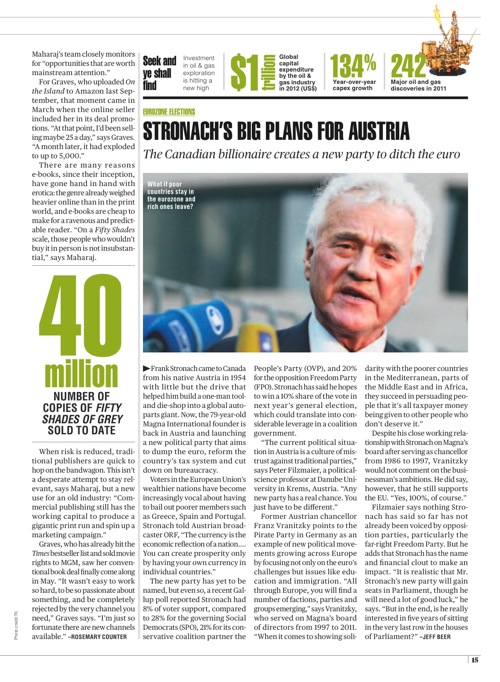