There go the brides

By no coincidence, I’m sure, Girls in White Dresses is perfectly timed. Not only is it high tide for wedding season – and the endless parade of corresponding showers and bachelorettes that go with it – and the biggest summer of royal weddings in 30 years, but we’re also riding a firm backlash: Bridesmaids, the raunchy anti-romcom that mocks marriage mania, is Judd Apatow’s top-grossing film to date. Like actor Kristen Wiig, author Jennifer Close is saying what single gals have long been thinking: Down with Bridezillas, I hate this damn dress, and where’s the bar?

But since true hatred of weddings takes many years of disappointment and champagne hangovers, Close begins her story collection with Isabella, 12. She’s a forced bridesmaid with crispy hair in the tacky wedding photos of her snooty older sister. A decade and a move to New York later, not much has changed: Isabella is single, unemployed and squeezed into one room with her friend Mary.

Close tells 17 loosely related tales of ladies – the two together with their other friend, Lauren, plus friends of friends, siblings and colleagues – looking for love in New York. Unlike a certain sexy show, the city is refreshingly unfabulous, and Close (a former New Yorker) thrives at capturing the sweltering heat, the vermin scratching in the walls and that unshakeable feeling that a stranger will push you onto the subway track.

Such show scenes include when your pal Bridget, “the kind of friend you couldn’t get rid of,” decides to marry your college ex. Or when your boyfriend spends less time with you and more time on the campaign trail with an unnamed presidential candidate from Illinois, until you’re just lucky to catch “a glimpse of his head on the border of the TV.” Or when your square sister, also currently stoned, has you check out her post-labour tearing (“I’m imagining Freddy Krueger’s face right now”).

But as usual, it’s those smug brides who steal the show. “Kristi was really embracing her role as bride to be. She never said things like, ‘Let’s talk about something besides my wedding.’ ” Kristi has six showers, an engagement party unfairly ruined by a great-aunt’s death, and a bachelorette party completely spoiled by a guest’s pregnancy announcement. “I just really wanted this night to be about me,” she wails.

It’s an old shtick, and Girls in White Dresses mostly re-wears it well, even if Close relies heavily on familiar archetypes and easy divisions between frenemy marrieds versus quirky singletons. But there’s little divide in either camp; in fact, our three main characters often read so interchangeably that I hardly noticed we were now on to Lauren’s bad date. Each is equally prone to some painfully clichéd laments – “In college, 29 seemed impossibly old. By now, she’d thought, she’d be married and have kids” – but Close mostly keeps the single pity to a minimum.

In the end, and this won’t ruin anything if you’ve ever read chick lit before, each of the gals will be partnered off accordingly. There’s both satisfaction and frustration here – even Kristen Wiig needed some crowd-pleasing romantic closure in Bridesmaids – but a heartwarming scene has three coupled friends reminiscing over a bottle of tequila in a box-filled apartment. It’s more cliché, of course, but turns out female friendship prevails. Unless one turns into a smug bride, that is. 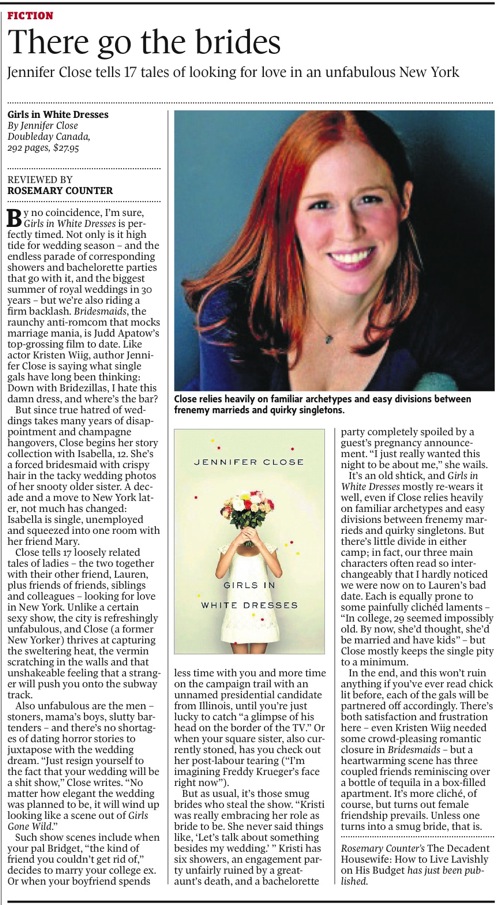