A shot in the arm for boys

They’re often unwitting carriers of HPV, so why no vaccinations?

Last November, the findings of the first study on boys and Gardasil — the vaccine that protects girls from four types of human papillomavirus — were released by pharmaceutical giant Merck. The good news is it works, preventing 90 percent of male HPV cases. The bad news is that Canada, unlike Australia and some European countries, has yet to make Gardasil accessible to boys.

Since the vaccine became available to Canadian girls in August 2006, more than a million doses of Gardasil have been administered, in part through a government-funded program, and with no major reactions reported in Canada. But despite its apparent success, there’s been no mention of federal funding for male vaccinations, and Health Canada won’t comment on where Gardasil is in its long approval process, citing “proprietary information.”

Health Canada estimates that nearly 75 per cent of sexually active Canadians will be infected with HPV in their lifetime. This fact has Dr. Paul Randall, a Toronto-area family doctor, calling the vaccination of boys “a no-brainer.” He explains that the first step toward eliminating HPV is to vaccinate male carriers — largely symptomless, unknowing spreaders of the virus.

So what’s the problem? According to Randall, it’s the cost. At a wholesale price of $400 for the three administered shots, Gardasil is said to be the most expensive vaccine on the market. For the threeyear period from 2007 to 2009, the federal government forked out a hefty $300 million for Canadian vaccination programs, and if approved and administered for boys as well, Gardasil’s cost to our government is set to double.

Dr. Elizabeth Saewyc, an expert in adolescent health, isn’t surprised by the government’s inaction. She believes Gardasil likely will be approved for Canadian boys, but she doubts we’ll soon see boys lining up for free vaccinations. “We still focus on sex as the responsibility of the woman,” she says. 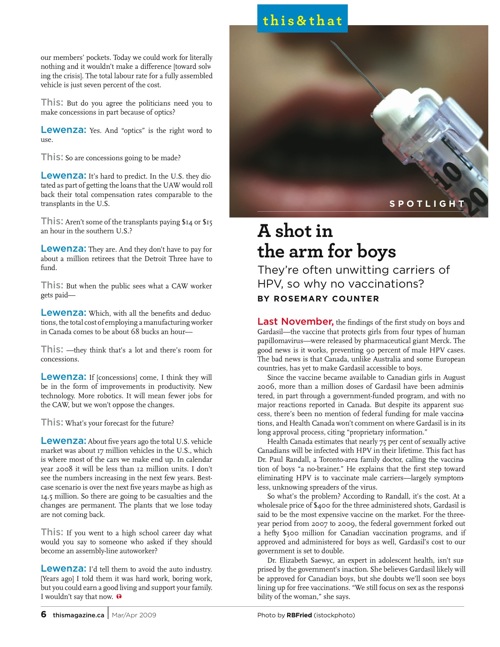