Top of the pops

Ever wish there was a degree in TMZ? Put your super-fandom of Queen Bey—and other academia-worthy, big-name celebs—to work with these pop-culture courses guaranteed to liven up your transcript.

The Beatles, Mount Allison University, Sackville, N.B.
Buried among Mount Allison’s music department’s collaborative keyboard and vocal pedagogy classes is a far more fun option: The Beatles, taught by music professor Elizabeth Wells. The third-year class draws on recent scholarship that addresses musical, social and cultural issues surrounding the Fab Four—from early covers through to Revolver and Sgt. Pepper’s Lonely Hearts Club Band. “The class is interactive in that students can do a performance project where they perform their own arrangements and renditions of Beatles songs. The idea is to have a new take on the song, not perform it as the Beatles did. At the end of the year, we have a performance of the best song arrangements for the whole community, and hundreds of people attend,” says Wells.

Gender and Performance, University of Waterloo
Offered for the first time this fall, this drama course focuses on the feminist impact of Beyoncé’s eponymous 2013 album. Predictably, the media jumped on the announcement and dubbed it “Beyoncé 101,” but professor Naila Keleta-Mae was quick to explain that it’s not just rocking out to Flawless the whole time. “I had to take up the work of this astute performer—an astute businesswoman—who is articulating a kind of feminism that’s fas- cinating and very much of the 21st century, and is definitely a mainstream feminist,” she told the CBC in an interview this summer.

Cristiano Ronaldo, University of British Columbia Okanagan
Sociology prof Luis Aguiar was so enthralled by soccer star Cristiano Ronaldo—not just by his fabulous football skills, but also the 100 million-plus social-media followers that make Ronaldo a media sensation—that he created a fourth-year course on the “sociological rel- evance of social phenomena like organized sport and the forces that create a global ath- lete.” Sports-fan students won’t just be watching the game; they’ll be studying identity, nationality and representation across the Portuguese diaspora.

Tolkien, Fantasy and Medievalism, Dalhousie University, Halifax
Long before the film adaptations, J.R.R. Tolkien’s books were among the most enduring works of 20th-century fiction. Students of English and pop culture love this course, where The Lord of the Rings, The Hobbit and The Silmarillion fill the reading list with themes of creation, myth, fantasy, magic and monsters. Professor Kathy Cawsey looks at escapism and nostalgia, then dives into Tolkien’s writing as social commentary on war and peace, indus- trialization, Christianity and environmental- ism. She pairs each reading with the medieval or Nordic source that inspired it and, yes, fans of the films can expect some clips in the last week of term.

Rap Linguistics, University of Calgary
In what might be the coolest course in Canada, linguistics professor Darin Flynn’s syllabus features Eminem, Kanye and Jay Z, all of whom are required reading—or listening, rather. “As linguists, we seek to understand language as it is, not as it should be,” says Flynn. Students will take a closer look at rap’s phonology and syntax, using software to measure sounds. They’ll then choose their favourite rapper and delve deeper. “These songs criss-cross sound, emotion, grammar and multiple metaphors in such a rich way,” he says.

The Many Faces of Harry Potter, Western University, London
J.K. Rowling’s iconic kid’s-book-turned-opus often pops up in literature courses, but English majors at Western can enjoy an entire semester of pure Potter. Professor Gabrielle Ceraldi’s course looks at the book’s strange—and slightly magical—ability to transcend age, gender and genre, borrowing tropes from the Gothic novel and detective fiction, as well as fantasy, adventure and dystopian works. Students read all seven books (as if they haven’t already) plus a few more for comparison’s sake: C.S. Lewis, George Orwell and Suzanne Collins pop up next to Rowling on the course’s too-cool-for-school syllabus.

The Music of Bollywood Films, York University, Toronto
Bollywood enthusiasts are in elective heaven with this introductory course, which has no prerequisites and requires no previous musical training. Instead, music from Indian popular cinema is analyzed in detail, as are plots, style, form, history and funding—all to explain why Bollywood’s blurring of cultural, religious and socio-economic borders have resulted in its own distinct form of music. Since professor Sundar Viswanathan created the course in 2010, it has proven a popular elective with music majors—and everybody else on campus.

Theories of the Horror Film, Carleton University, Ottawa
As long as you don’t fear violence or gore, Theories of the Horror Film is a fan’s excuse for a full semester of scary-movie nights. There is a single textbook, as well as a viewing list that includes A Nightmare on Elm Street, Psycho, The Exorcist and Hostel. Students look beyond the cheap thrills to the heart of horror—examining questions of genre, gender, censorship and psychoanalysis—to understand its long-held allure. Professor André Loiselle often teaches a related course—the Canadian Horror Film—with slightly less-hyped movies and significantly more Cronenberg, not to mention gems from Quebec’s “Satanist” cinema.

Politics in Graphic Novels and Video Games, Mount Saint Vincent University, Halifax
Political studies students get a break from the serious stuff when Jeffrey MacLeod—professor by day, visual artist by night—turns his eye to comic book and video game history, all of it full of political imagery that explores relations between citizens and the state. Not only will students enjoy comic books, graphic novels and video games—including works by Neil Gaiman, The Dark Knight Returns and Grand Theft Auto—they’ll actually develop their own creative work that expresses powerful political messages (with superpowers, if necessary).

George R.R. Martin, University of Regina
For three years, the English department at U of R has offered an academic take on George R.R. Martin’s epic saga A Song of Ice and Fire, recently adapted for TV by HBO as Game of Thrones. The class examines theories from the worlds of fantasy, screen adaptation and gender, all while incorporating the history of politics and feudalism. Fair-weather fans should prepare themselves for a heavy reading load. As anyone who’s read the five books in the series knows, they clock in between 700 and more than 1,000 pages each. And the last two volumes have yet to be written. 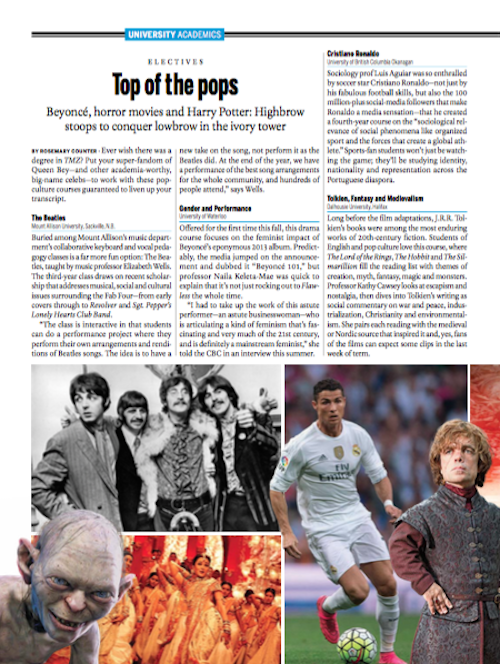 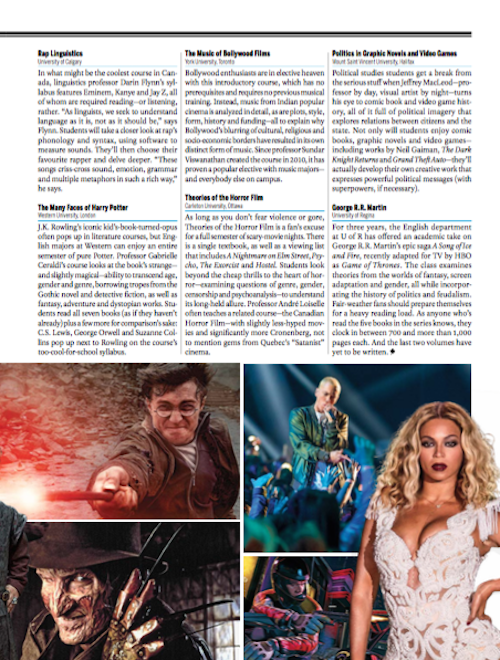