In 1971, Go Ask Alice by “Anonymous” appeared on bookshelves from seemingly nowhere and shot to the top of best-seller lists. Billed as a real-life diary chronicling an unnamed 15-year-old girl’s two-year descent into drugs and eventual death, it became an instant sensation. The cautionary tale is said to have sold 3 million copies in three years, kept selling through several paperback reprints, became a TV movie, and then was adapted for the stage. At the end of 2020, a special 50th-anniversary edition was rereleased to similar fanfare.

Go Ask Alice’s half century of success wasn’t luck or a fluke, but the result of a formula that proved impenetrable. First, it was crammed full of underage sex, hard drugs, profanity, homosexuality, and prostitution. Poor writing and plot inconsistencies didn’t make the book “bad,” but “real.” Even the harshest reviewer wouldn’t criticize the private thoughts of a dead girl. The book won accolades just as often as it was banned by libraries and school boards—making it all the more alluring to readers desperate to get their hands on the controversial text.

But if this all sounds too good to be true, it’s because it is: Go Ask Alice was a fabrication and fraud. The real author was “Dr.” Beatrice Sparks, a middle-aged Mormon writer with sketchy qualifications who scored a book deal with a lie and then watched it snowball to epic proportions, all while penning nearly a dozen more “real diaries,” some supposedly written by her so-called patients, and collecting residuals. The grandmother of con artists is the subject of journalist Rick Emerson’s new book, Unmask Alice: LSD, Satanic Panic, and the Imposter Behind the World’s Most Notorious Diaries. We asked Emerson to explain the vintage grifter and how she possibly got away with it…until now.

Vanity Fair: There are two stories about the origin of this book: the lie and the truth. Can you tell me both?

Rick Emerson: The official backstory was that Alice was a girl from California who had fallen into drug and alcohol abuse. At some point, her parents came home and found her dead following a relapse. But she’d left behind these diaries, which her parents discovered and read, then decided to make sure their daughter’s death served some greater good by giving it to a publisher. They wanted to share her story with the world to help other teenagers avoid the same fate.

Over time, other facets of the story emerged. A later reprint included Beatrice Sparks as “editor.” She gave an interview to a Utah paper saying she met “Alice” at a Christian youth conference and became friends. After Alice died, Sparks was given the diary and edited it for publication. After that, Beatrice Sparks produced several other teenaged diaries like Jay’s Journal, Finding Katie, It Happened to Nancy. All of these books had a similar feel and flavor, dealing with issues like homelessness, AIDS, even satanism. At the Library of Congress, Beatrice Sparks is listed as “author.” It took awhile, but it became clear that the books were not as they’d been presented.

Is it possible that there never was an Alice at all?

That’s really been the big question for 50 years. In a weird way, that’s the secondary hook of the book, now that the primary hook has been debunked. Going into this project, I expected there was no Alice. I was prepared for complete fiction, top to bottom. Other people think there was an Alice, but maybe the story was embellished. Without spoiling too much, I’ll say neither of those views is correct from what I found. The answer is somewhere in between, and it wasn’t what I expected.

What did you learn about Beatrice Sparks?

I know the benchmarks: She was born in 1917 in Idaho and came of age during the Great Depression in Logan, Utah, a very small, very conservative town. Her father abandoned the family for a woman half his age and her parents divorced, which in Logan was almost unheard of. Beatrice had to drop out of school to waitress. In that community, it would have been shame upon shame. No surprise that Beatrice decided to pack up and reinvent herself. She moved to San Francisco, a galactic change. It’s hard to imagine two places with less in common. There, she scrapes by to pay the bills before she gets married, has a family and moves back to Utah.

How and when did she become a writer?

The whole time, actually, she worked hard to become a writer in the entertainment business, which was and is a male-dominated business. The fact that she was able to navigate and fight her way in is pretty impressive. She finally broke through in 1971, at 54, thanks largely to good timing. After Woodstock and the Manson murders, Nixon was pushing the Controlled Substances Act. [Radio and television personality] Art Linkletter’s daughter jumped to her death—allegedly while on LSD—and the president sent a condolence letter to invite him to the White House. Nixon said the media made drugs seem cool while antidrug messages were dull. Sparks had been pitching Linkletter ideas for years, but her new idea—a true story and real diary—finally fit. She really persisted and pitched and networked until it finally worked.

You sound kind of impressed. Are you at all sympathetic to Sparks?

Sympathetic is the wrong word, but I think she felt she was doing the right thing. She was a person who worked hard to paint a picture of what she wanted to be and the kind of life she wanted to live. She relentlessly pursued this until it became true. At least that’s the story. Beatrice Sparks wasn’t just an unreliable narrator for other peoples’ lives—she was an unreliable narrator for her own life. Like a lot of people who come from troubled families with a lot of emotional upheaval, she survived that by creating a persona. I’m not a psychologist, I should point out.

How very un–Beatrice Sparks of you!

Hah, yes. I just mean no one seemed to have much of an idea of what she was actually like. Even her son told me, “Nobody knows her story. Including me.” I think over time her persona became an empty shell. Whatever was inside her nobody seemed to know, all by design. This also let her reinvent herself in the moment depending on what the moment required. Sometimes she’s a youth counselor, a music therapist, an adolescent psychologist, a PhD, a psychotherapist, a child psychiatrist. I wasn’t able to confirm she ever even graduated.

If someone tried a scam like this today, wouldn’t they be immediately busted?

You would think so, but at the same time, every few months we get some new story about some person who’s pulled a scam. I’m thinking Elizabeth Holmes, Anna Sorokin. It’s tempting to think with the internet, everything can be proven or disproven, but it’s just not true. And while the internet might give you some facts, it doesn’t give you the feelings. My biggest regret of this book is that I never got to talk to Sparks one-on-one. I want to know if she justified or rationalized away her actions, or if she felt guilty, or if she just didn’t care.

She died in 2012, having faced no consequences at all. Do you wish she did?

Part of that would depend on her perspective, because Alice in particular has a very mixed legacy. Would that book have succeeded if Sparks had called it fiction? If someone reads Go Ask Alice knowing it’s the work of a 54-year-old Christian mom, does it have a different meaning? Of course. Without the lie, I don’t think it would have made much of an impact at all. For good or bad, millions of people might have lost whatever they took away from that book.

You also write, “Fiction or not, Alice was real.” What do you mean?

I mean that when people read Go Ask Alice, it resonated with them, and that was real. Seeing yourself in art, maybe you read a poem or you listen to a song, and you think to yourself, Oh, my God, Michael Stipe knows exactly what I’m going through. Sensing that someone understands you and has gone through what you’re going through, truth or not, it’s a real thing. That’s something that cannot be faked. 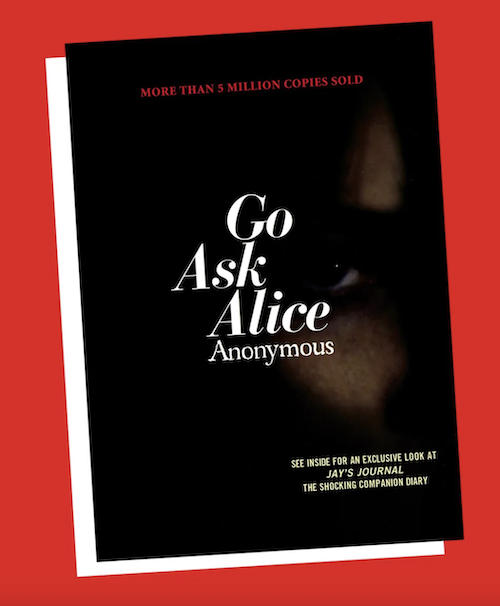