Are your speaking habits derailing your career? Beware of these communication pitfalls

You may know how to dress professionally, but do you know how to speak professionally? According to Judith Humphrey, founder of The Humphrey Group (a Toronto leadership communications firm) and author of Taking the Stage: How Women Can Speak Up, Stand Out, and Succeed, many women are victims of their own timid language in the workplace. “Women are socialized to be nice and sweet,” she says. “They don’t want to be seen as too aggressive, strong or confident.” Con- sciously or not, we often choose words that undermine our credibility and soften not only our image but also our ideas. Here are five ways to drop bad “lady language” habits today:

SORRY, NOT SORRY
Imagine a man and a woman are both three minutes late to a meeting. He’ll charge in saying nothing; she’ll likely apologize. Ditto for email correspondence (“Sorry to bother you”) and voicemail greetings. “One language habit women need to rid themselves of is the desire to constantly apologize. Does your voicemail say, ‘Sorry I’m not here’?” asks Humphrey. “Why should you be sorry? You’re simply engaged in another activity.” Studies show that women apologize more than men do. Unless they’ve done something they’re genuinely sorry for, women need to stop apologizing.

TODAY’S THE DAY
Women are too prone to use the past tense, according to Humphrey. Saying, “I wondered if we should,” for example, implies that you felt that way yesterday, but are not quite so sure today. “Putting words in the past tense is a way of weakening your statement,” she says. Instead, own your thoughts in the moment and stand by your statements.

TOO MANY QUESTIONS?
“Women ask questions instead of making assertions—even when they know what they want to say,” explains Humphrey. Eighty percent of women ask questions that they already have the answer to, such as “Do you think we should take this approach?” instead of the stronger wording, “Here’s the approach we should be taking.” Or in a meeting, “Do you mind if I add something?” It’s not necessary to ask permission to contribute an idea, and there’s no need to “add” it as an afterthought.

UNDERMINING MODIFIERS
Speaking of word choice, slash these from your lexicon:
• just (“I just wanted to say”)
• a little bit (“I’m a little bit concerned”)
• maybe (“we should maybe rethink”)
“Women consistently use weak verbs that diminish what they’re really saying,” says Humphrey. They preface statements with “I think,” when they already know, and often use emotionally charged words like “I believe” or “I hope” when stronger words would have more impact.

WRITE IT DOWN
Since weak language is largely subcon- scious, the best way to tackle it is with more awareness. “In your writing, you can analyze and delete anything that minimizes,” says Humphrey. “Practise such written edits and you’ll eventually become more conscious in your spoken word.” And when you speak more strongly, your tone is stronger, which affects body language and even eye contact. “Language is more than just language,” says Humphrey. “It becomes a focal point that affects everything.” 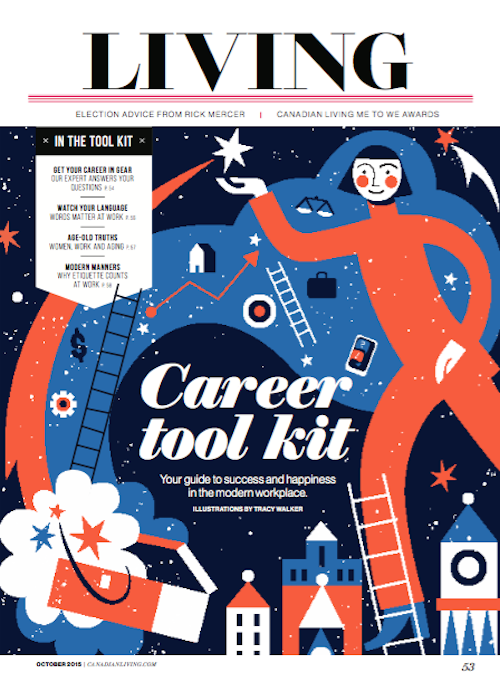 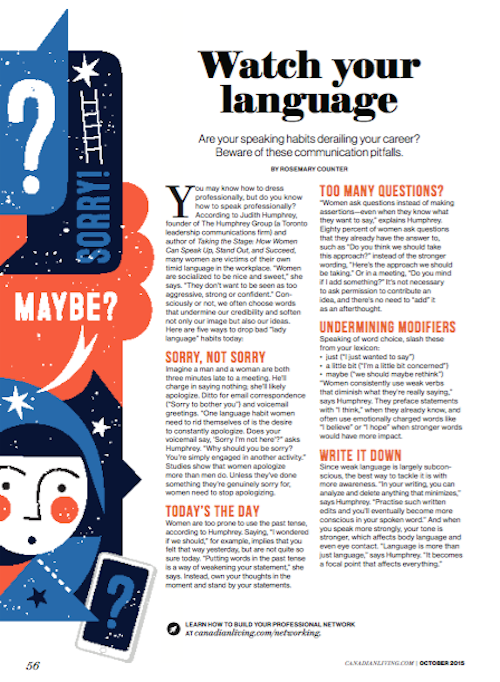