Which Game of Thrones character do you like most?

Employers are increasingly asking oddball questions in interviews. Here’s how to actually answer them

It was almost a decade ago when Glassdoor, the San Francisco–based recruiting site, began noticing a new trend creeping into job interviews: Rather than the usual boring queries—“Why should we hire you?” “What’s your dream job?”—interviewees were instead facing what Glassdoor has since dubbed “oddball questions.” Readers submitted the strangest questions they’d been asked, as well as the companies that posed them. Among the examples: “How many ridges are there around a quarter?” “How are M&Ms made?” “If you could be any superhero, who would you be?”

Oddball questions are supposed to feel random, but, of course, they are not. “This practice started very deliberately with the big tech companies, which, even during the last recession, were thriving,” says Scott Dobroski, Glassdoor community expert. “A fierce war of talent,” he says, made it hard to differentiate among an ever-swelling pool of candidates—all of them professionally qualified. Meanwhile, open-concept workplaces with nap pods and beanbag chairs meant employees spent more time in contact with their co-workers. In turn, this made personality (or “cultural fit”) more important than ever before. Previously used interview questions were easy for tech-savvy applicants to find. “It’s just too easy in this day and age to figure out exactly what you’ll be asked at any workplace,” says Dobroski.

So companies like Google and Apple—already considered pioneers of innovative office practices—decided to go rogue and switch to unpredictable questions that let interviewers spot innovators in action. “Oddballs aren’t there just to be weird and wacky,” Dobroski says. “The interviewers want to see your on-the-spot problem-solving skills.” So when your would-be boss asks which Game of Thrones character is your favourite, and you’ve never seen the show, your bumbling self is outta luck, right?

Wrong, actually. Look a little closer at this year’s oddballs and you’ll see they’re just last year’s questions in disguise. Preparing is still very possible. In fact, now that weird Qs have spilled into hiring procedures for other professions, answering the unanswerable is a required skill of successful interviewees. Here’s the real deal from hiring experts on what oddball questions really mean—before they trip you up.

“If you could sit next to one person on a transcontinental flight, who would it be?” Asked at Salesforce, this is an uninspired reincarnation of the old, “if you could meet one person, living or dead?” question, which is straight out of the ’90s. “It shows me who your mentors are, the people who pique your interest and the characteristics you value,” says Sandy Jacobson, an Edmonton recruiter. Your pick of seatmate or dinner date doesn’t matter one bit (within reason; maybe don’t pick Hitler), says career strategist Ian Christie. “It’s all about how well you defend your choice—and ‘I just like them’ won’t fly. Focus instead on what you admire about them.”

“Do you ever feel like a plastic bag?” This Canada’s Wonderland gem is just a poetic version of, “what’s your biggest weakness?” (It’s a metaphor: A plastic bag is empty garbage…feeling like one sucks…do you ever feel like you suck?) “It’s no wonder this old weakness question is going extinct,” says Careergasm’s Sarah Vermunt. “It’s really lazy, and employers know they’ll get some BS answer like you’re a perfectionist who works too hard.” Instead, show them you can have a little laugh and then be honest about a bad day—and how you fixed it.

“How do you calculate the number of red cars in a city?” Designed to confuse and paralyze, this one from Manulife is 2016’s automobile version of the usual mathematical stumper. Similarly, Delta asked, “how many basketballs would fit in this room?” while IBM went with, “how many hours would it take to clean all the windows in London?” Your natural response is probably to freak out, but don’t. “They firstly want to see if you can possibly roll with this,” says Vermunt. “Next, it’s if you can come up with an answer.” Just an answer, not the answer will do, and it’s always one estimation (say 10% of cars are red) multiplied against the total (the population of drivers in the city).

“Which Game of Thrones character do you like most?” Bench Accounting asked candidates who they would most like to befriend in Westeros. But this question long predates HBO. “This is a more modern, ‘what book are you reading?’ and that’s really just, ‘how plugged in are you to the world?’” says Christie. If you’ve never seen an episode, don’t lie to try to fudge it (or say “Joffrey”). Instead, admit the truth, pivot the conversation and tell them what you are watching—and why you love it.

“If you were a utensil, which one would you be and why?” Fittingly, this question is from Jack Astor’s, but office workers have been fielding these Qs since as far back as the 1980s. (Recall Barbara Walters’ famous 1981 query: “If you were a tree, what kind of tree would you be?”) Other modern variations include the name of your autobiography or who would play you in a biopic. “Take an extra second to think about it, and let go of the anxiety about getting it exactly right,” suggests Vermunt. This one’s all about personality and whether you’ll fit into the culture. “The key is being authentic and knowing your audience,” explains Jacobson.

“Do you have any questions for us?” Just kidding—this one’s not an oddball as much as it’s completely expected and unavoidable. But like an oddball, says Christie, “the real question here is, ‘how interested are you in this company?’” The worst answer is, “None, thanks!” But some others are distinct faux pas, says Christie: “Don’t ask anything that’s already on the website; don’t ask about vacations, benefits or time off; and don’t ask for internal details like strategy.” In fact, now is a good time to throw an oddball right back. Christie suggests: “If you hire me, and we’re sitting here in six months and you’re completely satisfied with your decision, what did I do in the meantime?” Boom, you win! 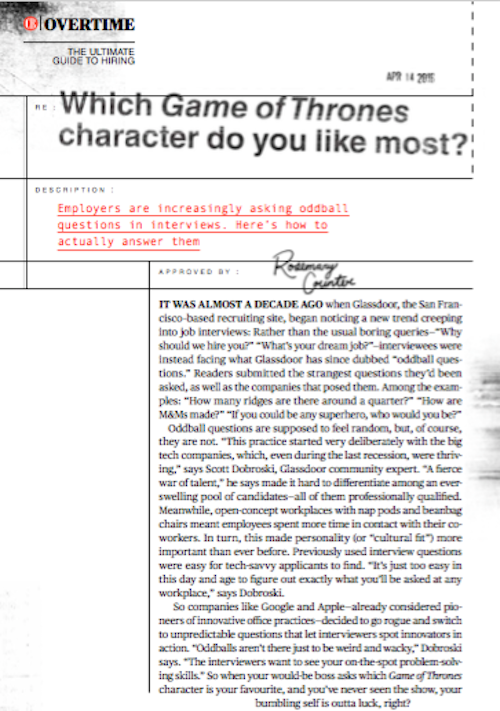 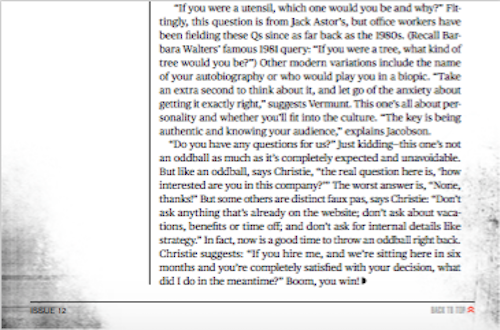