You can take that to the bank

Financial whiz Mitchell Huynh wasn’t always so money savvy. Not so long ago, he was a reckless freshman like almost everyone else. “I remember signing up for as many free credit cards as I possibly could, just for the free T-shirts and water bottles,” says Huynh, a financial-planner-turned-professor who cringes at this confession. “My friends and I used to call it the ‘free money card,’ because we’d just spend the money and then forget about it.”

Don’t do what he did, says Huynh. Even better, take his class at the University of Toronto’s Mississauga campus: Introduction to Personal Finance, a new 11-week course open not just to business and nance majors but every other undergraduate student, too. Since its launch last year, enrolment has tripled. To accommodate demand, three cohorts are now available for 300 eager students, 95 per cent of them coming from non-business backgrounds. Few are particularly financially literate, regardless of major. “I was surprised at the lack of base knowledge,” admits Huynh.

A 2017 PricewaterhouseCoopers study found that millennials are generally better educated and more skilled than their parents were at the same age, but only 24 per cent have basic financial literacy (meaning an understanding of assets, expenses and income). Just eight per cent have high financial literacy, including a grasp of taxes, mortgages and investing. “We take these students all the way from the basics—like the differences in bank accounts, how to maintain your credit score, different investment products—all the way to alternative loans and real estate and starting a business,” he says.

“Before this course, I always imagined myself in a regular nine-to-five, climbing up the corporate ladder,” says Josh D’Lima, a fourth-year business student and one of Huynh’s first students. “But when I thought about my goals, I saw that that wasn’t going to be enough. I wasn’t about to settle for half of what I wanted, so I had to make it happen.” After Huynh’s class, D’Lima bought two rental properties that pay for themselves and generate more money than an entry-level job.

D’Lima’s lofty ambitions aren’t rare in his generation. “Millennials and those even younger really want things right now. They don’t want to wait until they retire at 65 or 70 to enjoy life,” says Huynh. “They’re coming up with new and creative ways to get the lifestyle they want much earlier, but it takes a lot of research. I think that’s when they realize there’s a gap in their knowledge.”

There is now frequent discussion of mandatory money courses in high schools (or earlier), but even university-level courses are often lacking. “The business program is very theory-based and not so much based on real life,” says D’Lima.

By necessity, more and more alternative learning opportunities are presenting themselves at Canadian schools. At the University of Waterloo, students are invited to apply for a position in two extracurricular clubs, the Student Investment Fund and the Student Venture Fund. Both o er hands-on training in portfolio and venture investment, with real money—beneath the watchful eyes of industry experts. An anonymous external donor provided $250,000 to the university in 2012, and profits are rolled back into the fund.

At the University of Calgary, the registrar’s office offers MoneySmart, a non-credit service for students from all disciplines. They provide free financial one-on-one reviews by a peer, or group literacy sessions to any club or faculty that requests assistance. In November, MoneySmart’s workshop topics included “10 healthy habits of financial management” and “financial planning and investments.”

Even finance students are prone to apathy. “There is a course that touches on personal finance and stuff, but I didn’t know about it until yesterday, to be honest,” says Cedric Chung, a 21-year-old nance student at the University of Alberta. (The class is called Introduction to Family Finance; it’s a third-year course that’s been running for two decades in the department of human ecology.) “I don’t know why I didn’t know about it or why they don’t push these courses more, because it’s something we all need,” says Chung. “Not just finance people, not just university students, everybody.”

Chung knows his chosen field can be daunting. “People think buying a house or retiring is so far down the road that there’s no point even thinking about it. And they think it’s boring,” he says. To counter that bad rep, Chung and about 10 others lead the Piggy Bankers, a student-run group of money-minded people who organize events to promote accessible nancial literacy (and, hopefully, some fun). This year, they brought in experts to teach free events on job searching, taxes, personal credit and budgeting. They also hosted a networking pub night. About 40 people attended each event—some possibly drawn by the free pizza. Chung would love to o er more seminars to more people. “At some point, we might want to deliver courses to high school students,” he says, “but it’s even more di cult to get their attention.”

It’s too easy to blame youthful indi erence for nancial illiteracy, though; the same problems plague continuing education. For the U of A’s faculty of extension, where the average student age nears 40, it’s difficult to fill the seats in any money course—or keep them there. “The rise of direct and online banking in the early 2000s did empower people to manage their own money,” says Christie Schultz, the faculty’s assistant dean. In 2003, they launched courses called Personal Investment Strategies and The Art of Investing, though enrolment dwindled during the reces- sion, and both were cancelled in 2013.

It’s not as bleak as it might seem, says Schultz. “The expectation for such courses is now being served in other ways. Our alumni association now offers one-day workshops called the Educated Wallet that are actually very popular.” For $75, workshop-goers get a commitment-free crash course (for example, “Retire Happy” in April, or last fall’s “Financial Fundamentals”), no homework and a free lunch. Perhaps a conventional university course on finance—especially for anyone with sub-par nancial skills—feels intimidating, time-consuming or overwhelming. Maybe an English or philosophy major fears a room of math wizards and decides they’d prefer a breezier elective. Perhaps they assume everything you need to know is available online somewhere anyway—without homework, and for free.

They would be right. Marc Bachand, professor at the Université du Québec à Trois-Rivières, offers a massive open online course (MOOC) on personal nance. In 2015, just as MOOCs became trendy, Bachand thought to combine the open-course concept with personal nance, his particular expertise and already his day job. “We have all kinds of nance courses—that’s my regular work here—but we had to change the approach to reach the biggest population possible,” he says. The free, five-week online class covers personal finance, taxes and tax breaks, grow- ing your personal wealth and a (voluntary) final exam. About a quarter of students study up and write the test, just for fun.

Though technically a university-level course, Bachand has carefully designed the program with accessibility in mind. Anyone intimidated by higher education absolutely should not be, he says. “This isn’t an educated or not educated thing; 44 per cent of people are living paycheque-to-paycheque just the same. These are the people we’re appealing to.” So far, 20,000 people have completed his course in three years. For comparison, the university has 14,000 students enrolled.

Like Bachand, Huynh does his best to skip the academic jargon that makes students’ eyes glaze over in favour of interesting, usable and accessible info. “I always try to keep it as practical as possible. I want them to be able to stroll right out a er a lecture and execute what they learned,” he says. The good news is that these new and innovative options make money knowledge neither hard to nd nor bland—and they work in your favour for decades. “People need this info much sooner,” says Huynh, “because the sooner you under- stand things like compound interest, the better off you’ll be later on.” 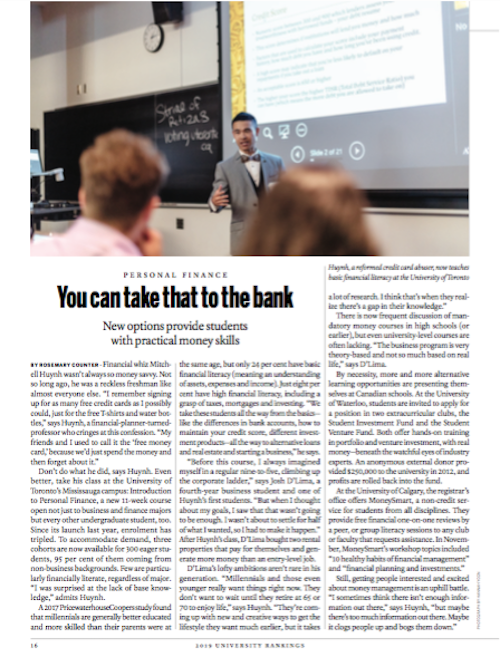 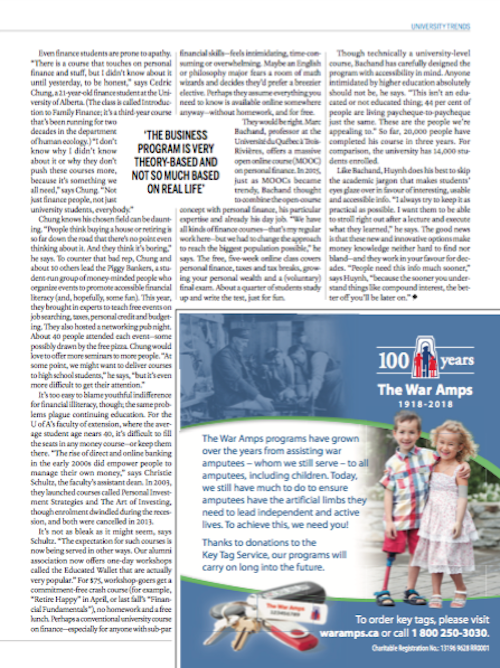