A heaping spoonful of Sugar

Cheryl Strayed is everything you could want in a life adviser, hand-holding, sweet nicknames et al

Novelist Cheryl Strayed, a.k.a. Dear Sugar, the much-loved (formerly) anonymous advice columnist from TheRumpus.net, despite being “totally unqualified for this gig,” is totally qualified for this gig. She’s even got big thoughts for her twenty-something self: “One hot afternoon during the era in which you’ve gotten yourself ridiculously tangled up with heroin, you’ll be riding the bus,” she says. A little girl carrying two purple balloons offers her one. “You won’t take it because you believe you no longer have a right to such tiny beautiful things. You’re wrong. You do.”

In Tiny Beautiful Things, a compilation of 50-some published and brand-new columns, sad stories like this one – from childhood sexual abuse to her mother’s early death to a failed first marriage – are the lens through which Sugar dispenses life-learned advice to her letter writers. What is this “love” thing all about? How can I get over the death of my child? How can I find love with my disfigurement?

Despite her name, Sugar doesn’t ever stick to the sweet stuff. She also doesn’t stick to the rules, explains writer Steve Almond, the original Sugar who was later replaced by Strayed, in the introduction. “Advice columnists, after all, adhere to an unspoken code: Focus on the letter writer, dispense the necessary bromides, make it all seem bearable. Disclosing your own sexual assault is not part of the code.”

So while other columnists and self-help authors revel in “the modern sport of snark and schadenfreude,” Sugar instead relates and reassures. Most of her responses begin with a sympathetic apology – “I’m terribly sorry for your misfortune” – and then meander along to a telling anecdote from her past. “I lived in London when I was 20. I was technically homeless and desperately broke,” she confesses.

Strayed’s own often tragic story – she’s also penned a recent bestselling memoir, Wild, about getting her life together by hiking the 1,800-kilometre Pacific Crest Trail – has left her with a gentle compassion for people and plights of all forms. She admits to her own shortcomings where necessary (“I couldn’t help but wonder who the hell I thought I was in daring to address your question”) and then delivers the best advice she can. To a grief-stricken young woman following a miscarriage: “Don’t listen to people who suggest you should be ‘over’ your daughter’s death by now. … They live on Planet Earth. You live on Planet My Baby Died. … I know because I’ve lived on a few planets that aren’t Planet Earth myself.”

And then, between the affectionate drops of “darling” and “doll” and “sweet pea” and “honey bun” that have become Sugar’s signature, is the solid try-this tidbit of tangible advice that’s so often lost in sentimentality. She suggests books to read, websites to check out and support groups to join that lead to “actual real deal down-on-your-knees-in-the-mud change” that genuinely heals you.

Sugar follows basic principles – trust yourself, be true to yourself, choose your life, forgive and be forgiven – ignoring the in-your-face tough love that’s dominated the last decade of self-help. Well, mostly. Never above a well-placed swear word, Sugar’s often breakup happy (“Will you do it now or will you do it later?”), has little patience for privileged people (“You need to stop feeling sorry for yourself”) and loathes envy (“jealousy probably rises out of your outsized sense of entitlement”).

Interestingly, she is especially harsh on a seemingly disproportionate number of young writers who appear in her pages: “Writing is hard for every last one of us,” she scathes. “Coal mining is harder. Do you think coal miners stand around all day talking about how hard it is to mine coal?”

But maybe I’m projecting. I’m only human, just like Sugar, and the humanity that has her dubbed “the ultimate advice columnist for the Internet age” is the same that makes her advice flawed and biased in all the best possible ways. Now if only all advice-givers were so imperfectly forthcoming, sweet pea. 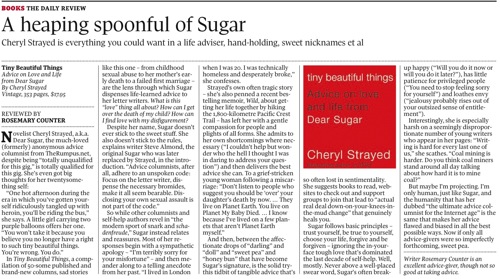