Amy Poehler, the Saturday Night Live alumni often seen dressed to the nines on red carpets, reclines on her bed. Dressed down in capris and cotton, she introduces herself: “Hi there! You’re watching Ask Amy, and I’m answering the questions you sent in.” She flashes her iPhone to the camera.

Today’s question is almost quaint: “My dad won’t let me wear makeup because he says 14 is too young. How am I supposed to feel as pretty as my friends?”

“Well, this is a tough one,” says Poehler. “I understand you want to wear makeup like your friends—and, by the way, I can tell by your email that you’re so pretty that you don’t even need it.

“But if you want to wear it,” she continues, “maybe you could talk to your dad and say, ‘Okay, maybe I’ll just wear, I don’t know, a little eyeliner?’ ” Between tangible tips, some heart: “You’re turning into a young woman and it’s hard for him. So he might need you to go one step at a time.”

The YouTube video, the first episode in the Ask Amy series, debuted this summer. Since then, nine more—including being bad at math, getting along with your girlfriends and accidentally tucking your skirt into your underpants—have garnered nearly 800,000 hits.

Ask Amy is a series on Smart Girls at the Party, a website and online series of the same name created by Poehler and two friends in 2008. Recently revamped to include Ask Amy, it also includes Boys Minute, where comedians like ex-husband Will Arnett and Jason Bateman offer goofy advice to guys. “Today’s health tip is salad,” says Bateman.

“We wanted to do something fun and good,” says Meredith Walker, the site’s “co-creator, executive producer and mystery solver.” Focusing on the awkward teen years was a no-brainer. “It’s the universal phase of angst and uncertainty,” says Walker. “I’d never go back to that age if you paid me.”

Walker and Poehler met 13 years ago at Saturday Night Live when Walker was head of the talent department and Poehler came in to meet with producer Lorne Michaels. “My name is Meredith. Amy’s middle name is Meredith,” Walker explains. “I am pretty funny, but I am not a professional comedian.” They started the site to be “helpful, or fun, or both.” Recent posts include a “Smart girls vote” video and one celebrating Native American awareness month. The only prerequisite? “Basically, whatever’s awesome.”

Sufficiently awesome is New Yorker Ruby Karp, who first appeared on the Smart Girls series at 7 as a “singer, dancer, musician, feminist, entrepreneur and skateboarder” to discuss her views on feminism: “That means, if a boy can do the monkey rings, so can a girl.” The video concludes with a dance party.

These days, Karp, now 12, writes a weekly blog for Zooey Deschanel’s site Hello Giggles and hosts a monthly improv show at the Upright Citizens Brigade Theatre in New York, a comedy venue co-founded by Poehler where Tina Fey, Will Ferrell and Robin Williams have performed. Proving adolescence really is the worst, the kids at school taunt Karp. “None of them think it’s cool,” she says of her writing or hosting gigs. Though bullied, Karp is upbeat about her dream to be a comedian like Poehler. “Amy’s very true to herself and still expresses her inner 12-year-old—in a good way!”

New on the site is Jendayi Bonds, a 14-yearold guitarist with the indie band Charlie Belle from Austin, Texas, and the new South by Southwest correspondent for Meow Meow Music, another Smart Girls series hosted by co-creator Amy Miles.

A big Parks & Recreation fan, Bonds was nervous to meet Poehler. “We filmed on my birthday, and when Amy asked how 14 felt, I said it was a big disappointment.” Amy laughed and Bonds felt at ease. “I felt so proud to make her laugh because she always makes me laugh.”

The Smart Girls series, billed as “the show that celebrates individuals who are changing the world by being themselves,” need not be for the young, or even girls. “We’re champions for girls, but we’re really champions for the whole human race, whether you’re 5 or 105,” says Walker. 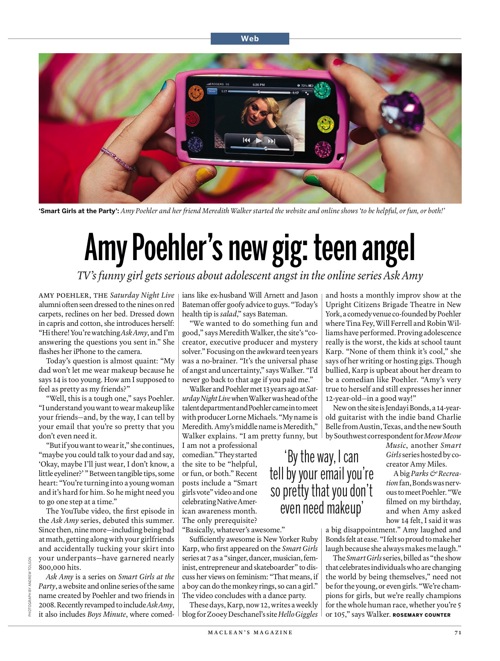