You’ve stockpiled burp cloths, bottles and breastfeeding pillows. But have you purchased your baby’s URL?

Ann Elisabeth Samson, a mom of three in Toronto, was on the Internet domain registry site GoDaddy.com when she decided to check whether her kids’ names were available as URLs. They were. Samson, who works as a website editor, had long ago purchased her own domain name. It had never occurred to her to buy her kids’ names, but now she reached for her credit card. “I think it’s fun,” she says. “It took five minutes, and it’s not a huge investment.”

For less than $30 a year per URL, Samson became part of a growing technology trend: securing your children’s digital space for them, sometimes years before they learn to send an email or know what it means to Google something. The idea is that claiming your baby’s little corner of the Internet now— whether it’s just a domain name, an email account, or the full suite of social media handles and user names—is just part of being a responsible parent. In Samson’s circle of friends, it’s not unusual for parents to receive their child’s URL as a baby gift. “I think it’s a fantastic present. It’s something you might not think to do, it’s not that expensive, and it’s not another piece of plastic baby gear.”

Rich Merdinger, vice-president of product development at GoDaddy, reports that the company has seen substantial increases in registrations of last year’s top five girl and boy baby names. “Parents are realizing the scarcity of domains online, especially with social media, and they want a single place for their children to one day control their online identities,” he says. To accommodate growing demand, GoDaddy will also be expanding its domain suffixes (like .com, .ca and .org) to include kid-friendly options such as .family, .art and .fun.

While domain names cost a small annual fee, signing your bundle of joy up for Gmail, Twitter, Instagram and many other sites is free (for now) and easy. (Facebook users need to be 13 years old in order to set up a profile on the site.) Some parents simply use their child’s social media to post pictures for friends and family, others write letters to the email accounts or Tumblr blogs for the child to read later, and some designate a hashtag for their offspring. The most hardcore of social media addicts enjoy tweeting in the voice of their babies. For example: “Crayons don’t taste how I imagined,” and, “Managed to crawl all the way under the couch. Somehow I didn’t fit to come back out. Parents had to lift the couch off of me. Muaha- haha!” These updates were typed by Jaime Stein, a dad of two and social media manager in Toronto’s finance industry. He tweets as his sons under the handle @BabyTweetStein. (The Brothers Stein have amassed 170 followers so far.)

Last year, Google launched a tear-jerker of a commercial promoting their Chrome browser to parents, recommend- ing Google products, instead of a website, as a kind of digital scrapbook for your baby. In it, a young father uses Gmail to email photos, videos and letters to his young daughter, so that once she’s old enough to access the account, she’ll find a trove of messages and childhood mementos (her first laugh caught on camera, footage from a ballet recital, an adorably toothless smile, the arrival of a new baby brother). “I can’t wait to share these with you someday. Until then… Love, Dad,” he signs off. It’s not crazy to speculate that children whose parents don’t create a similar digital record for them to discover when they’re older might feel left out, or somehow less cherished.

But to many parents, including Victoria Morningstar, a mom who lives in Goodlands, Man., turning your infant into a digital entity this early on—and tweeting in the imaginary voice of your baby—isn’t at all adorable. “It’s weird and invasive,” says the 29-year-old mother of two boys, four and 18 months old. “If you’re posting as your child, even if it seems cute, you’re putting your own personality on them,” she says. To Morningstar, who got her first email address when she was 14 (she chose the handle “BedHeadPrincess”), parents who create and monitor their kids’ online presence for them are depriving their kids of both privacy and identity. She thinks kids should be in charge of creating their own accounts when they’re old enough. “When my sons are 14 years old and want to start a private blog, I don’t want to interfere. Mom doesn’t need their passwords.” Another consideration is that with an email account comes targeted advertising aimed at your offspring.

Most parent domain-buyers, however, are simply making what Merdinger calls a defensive or proactive registration— holding their baby’s e-spot for whenever he or she’s old enough to make use of it. Some parents argue that securing your baby’s domain can actually protect her privacy. In a much-read Slate article published last fall, writer and digital strategy consultant Amy Webb explained why she never posts anything about her daughter online. Webb’s goal is to make her child completely unsearchable on the Internet for now, but when her kid’s ready, so are all her accounts. Webb describes it as a sort of digital trust. “On the day of her birth, our daughter already had accounts with Facebook, Twitter and Instagram,” wrote Webb. “When we think she’s mature enough…we’ll hand her an envelope with her master password inside.”

Purchasing your child’s URL brings the potential for big gains in the future, depending on who he or she grows up to be. If your baby were Bill Gates, for example, securing his URL would have prevented a messy legal battle with so-called “cybersquatters” years later. Paul McCartney, Jerry Seinfeld and Tiger Woods all had to fight to regain online ownership of their own names. And remember when Jay Z and Beyoncé attempted to trademark their daughter’s name, Blue Ivy? Anonymous buyers were snatching up URL iterations of her moniker. Of course, domain disputes aren’t just for babies who grow up to be rich and famous. “My son’s name was already being used by another family,” says Samson. When renewal time rolled around and the previous domain owners didn’t jump fast enough, Samson scooped it up. “I received the notification it was available, so I got it.”

But how early is too early to transform a child into an Internet commodity? “This trend is right in line with a brand- ing strategy,” explains Tom Vassos, social media expert and author of Destination Innovation: Creative Mobile Marketing and Commerce Strategies. “The Internet is becoming more a part of our daily lives, so carving out digital real estate is becoming more important.” We all know the power of a simple and accessible domain name, sure, but unless you’re a Kardashian, branding your one-year-old isn’t something most parents would rush into.

“Some people think they’re doing the best thing for their child by keeping them off-line, while some people think the best thing is to make kids very media literate. It’s a hot-button issue,” says Samson. She admits she took some ribbing for locking down her kids’ URLs. With so many other things for parents to manage and worry about, website registration isn’t high on everyone’s priority list. “Some of my mom friends definitely thought it was crazy,” Samson says. Many parents think we should be spending more time teaching our young people to go outside and play, not how to work on their digital presence, especially in an era when many toddlers need to have the iPad pried out of their hands.

Signing your child up for all these accounts now also assumes you can predict what the Internet will look like, and which platforms will be popular, by the time he or she is old enough to use them. “Think of all the technology that has come and gone in the last 20 years,” says Vassos. “How do you catch the new ‘next big thing’ as it’s happening?” Teens are already abandoning Facebook at a rapid pace. (In a 2014 report, only 23 percent of US teens named as Facebook their most important social network, down from 42 percent in 2012. They prefer using Twitter, Vine, Instagram, WhatsApp and Snapchat, among others.) Try as we might to stay on top of trends, parents are not traditionally known as early adopters. Inevitably, our kids will one day deem us out of touch. Or, as Samson jokes, “Thanks for the AOL account, Mom.” 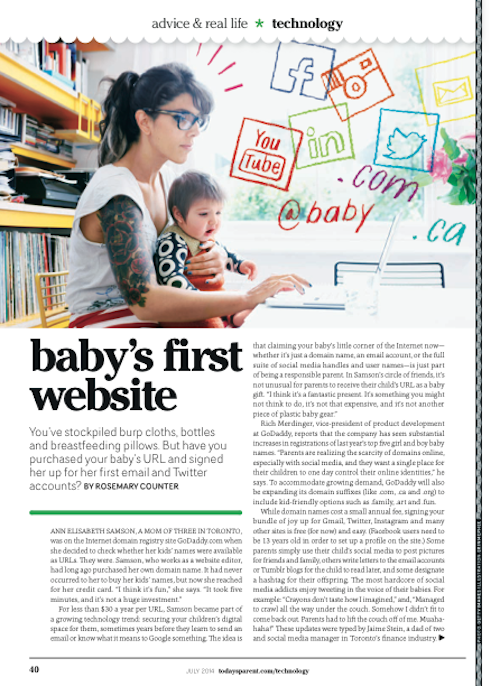 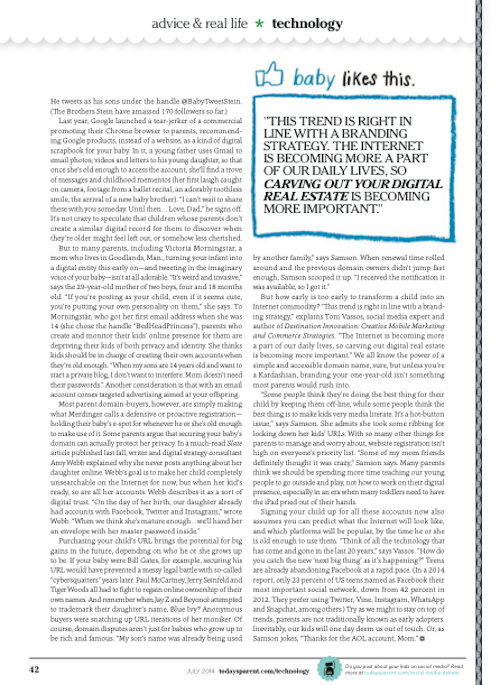