Were I to travel a century back in time to meet my pregnant great-grandmother, I wonder how she might answer if I earnestly asked for her “birth plan.”

First of all, she’d be completely dumbfounded by such a notion. I’d explain that in my time, mothers-to-be gather in small groups — sometimes in what we call “real life,” but mostly virtually behind hand-held machines — to discuss and compare the birth they’d prefer and everything they’ll do to have it. Many pregnancy books suggest that women arrive at the hospital with a printed copy of their plan in hand.

Here, a good birth is as easy as checking a few boxes: Yes, I’d like to have my labor photographed! Check, I’d like my water to break naturally. No thanks, I don’t think I’d enjoy a mirror to watch the baby crown, but oh yes, my partner would love to cut the umbilical cord!

I imagine great-grandma Edith May would be intrigued and maybe even envious that scientific advancements would some day make such miraculous things possible. But I mostly see her face turning grave as she answers my question of her birth plan: “To not die.”

After all, when she was 26 and expecting her third child in three years, the year was 1927. Maternal mortality would soon peak, and though hospitals were popping up in big cities, many women were not convinced. Most perks of a modern hospital birth — blood transfusions, antibiotics, epidural anesthesia — were yet to be invented, so birthing in hospital made little difference. And if this birth already sounds old-fashioned, hold on to your bonnet: My great-grandma was born and raised Amish, so the whole scene would have unfolded without electricity or running water.

How it went beyond survival of mom and baby I will never know. In my family, the details get quickly lost. In their place, we have stories. They say my grandma, a one-room schoolteacher, farmer’s wife and mother of eight, once birthed in the morning and drove the tractor in the afternoon.

My mother, a lawyer, was en route to work at 8:30 a.m. When her water broke onto the kitchen floor, she wisely decided to head to the hospital instead. I was born an hour later, easily and au naturel, and Mom was back to billable hours on Monday. “No money in labor,” goes an old family joke.

Which is maybe why, 33 years later, while seated in a welcoming circle of pregnant people in a prenatal class, I shared my own birth plan — a birth fantasy, really — that went like this: A healthy couple of weeks before my actual due date, my water would break in a gentle drizzle. I’d preferably be at home, though an adorable scene in my building’s elevator passed through my fantasies as well, so I’d calmly call up the midwife, who was already on her way. (By miracle, there’d be no city traffic at all that day.)

She’d check me out — five centimeters dilated, already! — and we’d wait out the last few hours together, deep breathing in the bathtub and watching HBO. Two hours before go time, we’d hop in an Uber to the hospital. I would be totally cool and nonjudgmental about drugs, if necessary, but was secretly planning to tough out that last hour riding high on adrenaine alone.

Logically, I knew, the plan was ridiculous. But the planning process was very reassuring and not unlike checking off items on a hotel breakfast menu with a golf pencil. Buried among these easy fantasies, however, a few boxes hinted at a very different story: I’ll decide whether to use pain medication; I’d like to be offered an epidural; I’ll choose the position I deliver in.

Of course I’d be doing and deciding all those things, wouldn’t I?

A few generations ago, maybe not. While women have no doubt been planning for birth as best they can since the beginning of time, in the early 1980s doctors and their patients started committing plans to paper. The ever-increasing medicalization of birth had collided with a second-wave feminist concern that pregnant women were losing their agency in a male-dominated medical field, and the new “birth plan” was an unlikely makeshift truce. But like all other contract-requiring arrangements, the birth plan implies a conflict just waiting to happen.

Still, for nine whole months I did a lot of talking and thinking about — and choosing, always choosing — what television shows and pregnancy books and online Facebook forums called my “best birth.” This is what the birth plan promised, and I bought into it entirely, with full confidence. Perhaps it’s an evolutionary tactic for species survival, but all I know is right before we headed to the hospital, I quickly prepped some chicken wings to marinate in the fridge. That’s how certain I was I’d be home by dinner.

I will spare you the gory details; suffice to say I wasn’t home for dinner. I wasn’t home the next day, or the next, or the day after that. I wasn’t back to work on Monday and I definitely didn’t drive a tractor later that day (or ever). I’m told I held my daughter in the moments after she arrived, but even then my brain was selecting some memories and discarding others. Some parts of the birth story I can only hope to forget: induction, complications, “failure to progress,” interventions, fetal distress, “poor expulsive effort,” tearing, episiotomy, hemorrhage. Had I been in an Amish farmhouse in 1927 — or hell, even at home in 2017 — I’d have almost certainly died.

In the same strange breath, I feel blessed that modern medicine saved us both. I’m eternally grateful, and know all too well that others are not so lucky.

When my daughter grows up, if she chooses to have a child, I’ll definitely tell her to skip the birth plan, as there really is no planning for birth.

But most often I think: When she asks for the story of the day she was born, what will I possibly tell her?

I could tell her tell the whole truth, but I know I won’t. Already I’ve been shaping a silly story that works better for us both (“Doctors said the party was over, but you said, No thanks, I’ll stay!”)

Or as I suspect my mother did, though she’ll never admit it, I could reimagine just a bit. Every time she retells her story, it seems to become even better. I hope mine does, too. 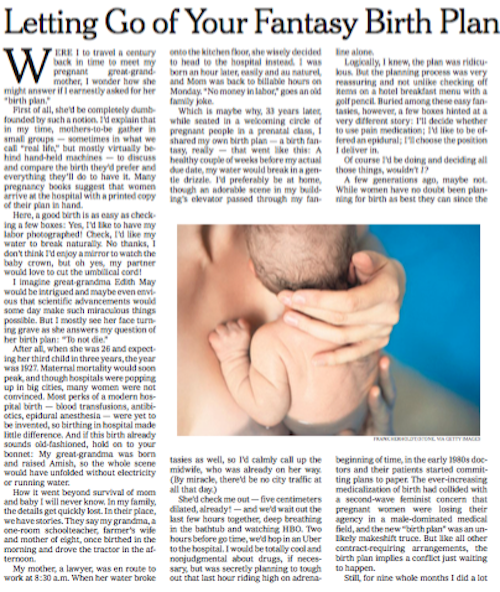