…and how to respond

Toward the end of my pregnancy, I sat down to a sushi lunch with a friend. The teenage waitress delivered my bento box with a side of judgmental sass: “Should you really be eating here?” she asked, eyeballing my stomach. I wish I’d said, Should you really be offering unsolicited advice on a topic you clearly know very little about? or As long as your kitchen is clean, Health Canada says I’ll be fine or even The North American ban on sushi during pregnancy is considered a racist insult in Japan. Instead, I meekly thanked her, albeit sarcastically, and filed the incident among many more irksome comments I’d received over the past nine months. The fact is, most pregnant people hear all sorts of ridiculous and insulting remarks, and it can be hard to know how to respond. Here are some of them—and how to deal.

Variations on this gem include the “ready to pop!” assertion (at six months, not welcome) and the old “are you sure there’s only one in there?” Uninvited commentary on your bigger-than-before body is so common and ubiquitous that Amy Morrison, the brain behind the hilarious website Pregnant Chicken, compiled a full list of clever pregnancy comebacks to “You’re gigantic!” Among them, “Holy shit, you too!” and “It’s actually a litter of puppies.” If that kind of sarcasm isn’t your jam, Morrison suggests you bite your tongue just a bit and go with something a little less combative (but that still gets the point across), like “I know, it’s almost like I’m growing a whole baby or something.”

“This probably won’t happen to you, but here’s my deeply traumatic birth story.”

Comedian Kate Davis remembers her pregnancy being marred by too many unwanted over-sharers’ birth stories—all nightmares, naturally. “One person told me she had a 62-hour back labour with surgical lance that turned into an emergency C-section and it took eight weeks to recover,” recalls Davis. She wanted to scream, “Keep it to yourself!” but she found herself frozen “like a deer in headlights,” she says. A better plan is to offer a dash of sympathy and ask for a conversation rain check—post- delivery, please and thank you.

“Is that [completely acceptable human activity that you're don't now] even safe?”

Do not ask Evanka Osmak, co-host of the popular podcast “Moms in the Middle” and an anchor on Sportsnet, if it’s OK that she works out while pregnant. One stranger at the gym made the grim mistake when he approached her mid-work-out and asked, “Should you be lifting weights?” She took the high road and politely explained that her doctor had given her the go-ahead rather than saying what she was really thinking (Maybe you should be lifting weights! Your gut’s bigger than mine!). For moms somewhere in the middle (see what I did there?), you could try a passive-aggressive “You know, I actually should! But thank you so, so much for your concern.”

It might be true—pregnancy insomnia is a thing, and so is peeing every 90 minutes all night long—but nobody appreciates hearing it. “I was frequently told I looked too tired to be out,” recalls writer Sarah Sahagian. Her retort? “I’m sure I’ll be even more tired when the baby arrives, so I’m enjoying pub trivia while I still can.” Lots of us have circles under our eyes to begin with, and yes, baby on board might make them worse, but worse still is all that and feeling like you look terrible. You can get revenge in the best possible way by admitting you are tired, in fact—and promptly asking for a favour.

“Try to enjoy it! Pregnancy is the easy part!”

Newborns are very difficult and exhausting, it’s true. But for some women, including Workin’ Moms actor Jessalyn Wanlim, pregnancy is extraordinarily difficult, too. Not to mention stressful, given her history of multiple miscarriages. Actually, my back hurts, my feet ache and I haven’t slept in days, she’d bark back—but only in her mind. In response to a comment like this, consider trying Kate Davis’s comeback: “If this is the easy part, I give up!” 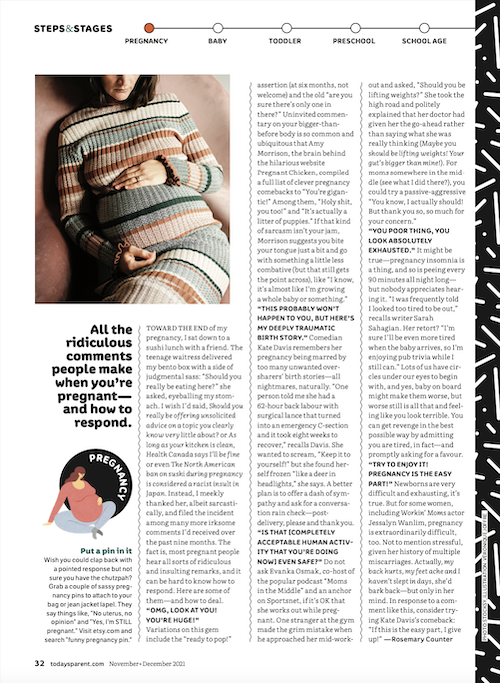