Before I had kids, I vowed never to use baby talk

Here’s why I was wrong.

Before our daughter was born, my husband and I agreed on this one most-important parenting rule: There would be no ridiculous baby talk at our house. No goo-goos or ga-gas, no little socksies on little footsies, and absolutely no cwuddles after squaarrry dweams.

“The trick is to talk to them like little adults,” my husband declared with full childless confidence. We’d each read exactly one parenting book — “Bringing Up Bébé,” on the fabulous French art of raising a child who plays quietly and eats foie gras — and bought in to the poise and dignity it promised.

Then the baby arrived.

Cut to a year later: Those plans have been long abandoned, and though I’m not proud to admit it, here’s some real-life dialogue from my house: “Hi, Baby! Did Baby have a nap? She diiiiid?! Was it a good nap? It wwwaaaassssss?!?”

As a writer, I’m deeply ashamed. But as a mother, I take odd comfort and some strange pride that I’ve learned to speak Baby.

In just a few sleepy months of intense immersion, I mastered the inflections, intonation, grammar and vocabulary (“Who mastered it? Mommy mastered it!”) of what many linguists consider a language proper.

“Most mothers — and fathers, grandparents, even siblings — on the planet do this,” says Patricia K. Kuhl, a professor and co-director of the Institute for Learning and Brain Sciences at the University of Washington. “It’s both a deep scientific puzzle that harkens back to the evolution of language and the most ubiquitous, observable, natural phenomenon in the world.”

So common and familiar and inevitable are these babbles and coos that linguists have long given the communication mode its own name: “Motherese,” although detractors are pushing for the gender-neutral “Parentese,” or the even more inclusive “Caretaker Speech” or “Infant-directed speech.”

Whatever you call it, Motherese sounds the same, and you already know it: “There’s a higher pitch, more variability in tones and a whole lot of repetition,” says linguist Alison Gopnik, a psychology professor at the University of California at Berkeley and author of “The Scientist in the Crib.” “Vowels get further apart, which just means acoustic exaggeration,” Kuhl says. “It has simpler grammar, here and now words — here comes a big red bus, there’s a cow! — with curvy intonation and pleasant sounds.”

All the above teach baby about language — both in general and their specific language — in the easiest, most efficient way. “Just when baby’s brain is mapping human language, they’re getting pure forms with clear, distinguishable words,” Kuhl says.

Research published in Pediatrics last year found those hours upon hours of one-sided conversations could pay off in the years to come: Early talk and exposure to conversation during the narrow developmental window between 18 and 24 months, they found, accounted for a 14 to 27 percent variance in vocabulary, comprehension and higher IQ scores 10 years later.

So should mommies and daddies talk to themselves all day? They shooould!

The good news is, they probably won’t have to try too hard. “Quite unconsciously,” Gopnik says, “you’ll adjust your language to your baby. It just comes out.”

It sure does. But chatting all day, every day (maybe nights too) with a wide-eyed little person who never says anything back means sometimes getting creative. At one particularly crazy point of no return, I started answering myself on the baby’s behalf. “Should Mommy change your diaper?” I asked. “I think we both know who’ll be changing whose diaper,” she’d reply, in a deep smoker’s voice.

Sometimes, in my responses, my daughter would declare me the meanest mom in the world. Other times, I’d have her say words of reassurance and appreciation exactly when I needed them most: “Mommy, has anyone told you you make the best powdered oatmeal in town?”

Bit by bit, Motherese crept onto my lips and into my life and settled deep in my psyche. Soon I found myself pushing my baby in her stroller, on yet another too-long stroll through the snow, having a full-on conversation with myself: “Brrrr! Is today hot or cold? Cold! Do you see snow over there? What color is snow? White! Unless it is yellow. Oooh, do you see any doggies in that park? You do? Look at that doggy wearing a coat. Now why would a dog wear a coat? That’s ridiculous, Mommy! What does a dog say? Woof woof!”

People who pass me look and listen: First with confusion, then embarrassment on my behalf (thanks for that), or even irritation. And I understand; baby talk can be grating, irksome and downright unbearable to the baby-less, who are quick to dismiss it as mortifying nonsense that could never happen to them.

But if you find yourself a parent, it can, it probably will and it definitely should happen. “Research shows that Parentese itself predicts future language, so we want parents to talk more and to talk specifically in Parentese,” Kuhl says. “Mostly this is an unconscious thing, but we want it to be a conscious thing.”

To do it well, do not talk to them like little adults — but do engage in the same basic human decency you’d allot anyone else. Do not interrupt, ignore or avoid eye contact in favor of your phone. Besides killing whatever rudimentary conversation you’ve got going, parents’ excessive cellphone use has been linked to children’s behavioral problems such as whining and temper tantrums, according to research from the University of Michigan.

“You’re trying to talk to a baby, not at them,” Kuhl says. Speak slower, like you might to any non-English speaker, using short sentences with proper grammar. Slightly over-enunciate your words, especially nouns and verbs, which may migrate naturally to the end of your sentences. “It’s easier to remember a word that comes last rather than a word somewhere in the middle,” Kuhl says.

It’s been said among speech therapists and other pediatric specialists that a baby needs to hear a word at least 500 times, in context, before they will start saying it. If pointing to a banana and slowly saying “ba-na-na” 500 times is a tedious thought, don’t think about it; instead, just narrate what you’re seeing and doing in humiliating third person (right now, for example: “Look! Mommy’s writing a story!”). If you’re short on material, multiply your baby word content possibilities by thinking in terms of baby’s senses: Besides what they see, what do they hear, smell, taste or touch?

But the truth is it doesn’t matter what you’re talking about, as long as you’re talking. “Parents want to buy a book or take a class, because that’s the way they’ve learned all their other skills,” Gopnik says. “My real advice to parents is to chill out and do whatever you’re doing.”

So that’s what I’ll do, even if Motherese often makes me feel dumb or embarrassed. I sometimes miss those days of popping in my headphones and strutting down the sidewalk with childless swagger. Then they are other days that it’s all worth it, like when we recently rolled past the dog park. A huge fluffy white dog was squeezed into a bright pink coat, and my baby spotted it immediately, pointing at the dog and belly laughing hysterically. Then so did I. It’s just a little inside joke we shared, but that moment of encouragement that whatever I’m doing is working is proof enough for me that Motherese has merit and deserves respect.

Even if it’s driving us grown-ups a bit crazy. 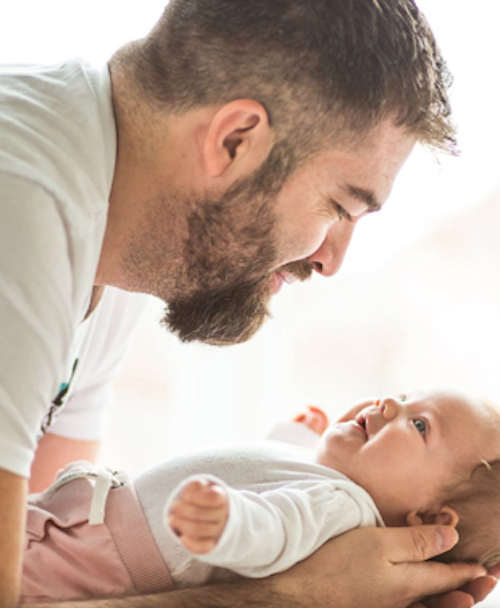