Now I don’t usually leave reviews, because I’m a baby

I stayed with my parents at the Flamingo Bay Hotel and Resort for four nights last month, though there were no real flamingos. Now I don’t usually leave reviews, both because I’ve never been on vacation before and because I’m a baby who can’t speak or type. But Flamingo Bay was the best vacation of my whole entire life, and also the absolute worst.

We arrived after a long ride on an airplane to a very old lady at a desk with far too many buttons. She called me “adorable,” “beautiful” and “cute,” but not “precious.” Check-in took a zillion years, during which time I was twice mistaken for a boy. This hurt my feelings and I cried. Then I saw a birdie and it was the best day of my life.

The best part of the hotel was that all my toys had appeared by magic. The worst part was that I hated them all. I threw them in every direction, but every time I left the room, the toys would be back in a neat line. I give the hotel an A-plus in magic.

The living room was decorated in blue, which is my second-favorite color, after yellow, which would have been much yellower. The carpet was fuzzy, soft and delicious. The couches were squishy with many wonderful shiny zippers and, luckily, no buttons. The coffee table was on wheels, which was perfect for riding, and there were many drawers for opening and closing, though each was disappointingly empty. I slammed every drawer on my fingers, surprising myself each and every time. Naturally, I cried.

There were lots of colorful pillows for grabbing and lamps for throwing them at. Many cords were available for pulling and nobody had blocked the electric plugs, so everyone had to pay me more attention than ever before. My parents’ black squares couldn’t find their Wi-Fi, which was extra great for me.

Unfortunately, a glass door made the balcony inaccessible. I could see the ocean outside but a cold invisible force stopped me from crawling to it every time. It hurt, and I cried. Then I found a mirror hanging at a very convenient standing height. The baby in the mirror was very attractive, so I licked her.

The bedroom was distinctly not my bedroom from home. It had my mobile, noise machine, blankie and binkie, but not my wallpaper, so I couldn’t sleep at all. I shouted all night, but the neighbors said they couldn’t even hear me. They might have just been being polite, which I don’t care about one bit.

In the morning, we visited the table room. There were many, many tables in the table room. A button lady gave me my table and my throne too. She didn’t pour me any black water, though Mom and Dad got three cups each. All the waiters brought me all my things I dropped en route. Everyone remembered my name but me.

The buffet was three-plus-one tables long. (I don’t know what any of this cost, but I think free.) Food was far too spicy and flavorful, so there was nothing to eat except Cheerios in a great big bowl that stayed full no matter how many I threw away, which was all of them. This brought the birdies in through an open door, which both delighted and terrified me. When I expressed my bird opinion, I was removed.

We went to the ocean, but it was too big. The ground kept sticking to my feet, so I cried. We relocated to the pool, a much better ocean. The water was too slippery but very warm, until it suddenly went cold and my lips turned blue. I warmed up in the sun, which was a very satisfying yellow. I’ll be coming back next year to see the sun again. 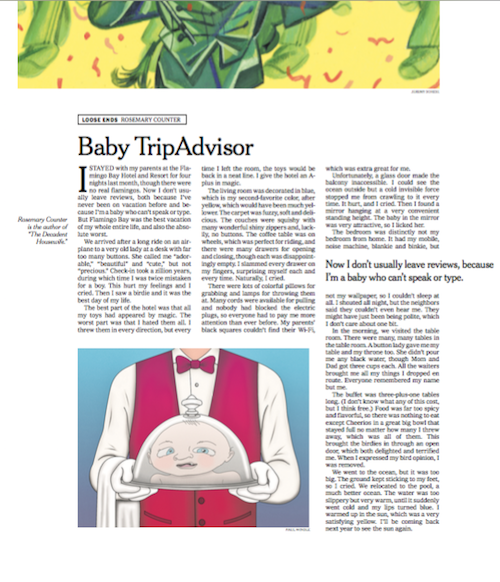