With myriad back-to-school options to choose from, moms’ groups have hit judgment overload.

“So you can’t play with us anymore,” she said. She’s not a 4-year-old schoolyard bully, but a 34-year-old women’s studies professor and my new mom friend who lives down the street. Ours is a familiar tale: We met in the park, discussed how old our girls were and whether they sleep through the night, and exchanged phone numbers to coordinate play dates. Soon our kids were friends too, digging in the sandbox while we drank coffee in the shade. Then the coronavirus arrived.

As back-to-school in September crept ever closer, we found ourselves on either sides of an unforeseen mom war: I yanked my kid out of too-expensive day care and reluctantly stayed home to raise butterflies; she scooped up my day care spot in a hot desperate minute. I chose seeing grandparents over two dozen germy kids, while my friend believes kids are better served by socializing with their peers.

No one has said so aloud, but our choices express what we would never: Each thinks the other is wrong. Maybe reckless, selfish and privileged too.

This, of course, is what modern parenting circles call “mom-shaming,” and while most of us don’t need the explanation, Urban Dictionary defines it as “criticizing or degrading a mother for her parenting choices because they differ from the choices the shamer would make.”

According to a 2017 national poll of nearly 500 moms conducted by Michigan Medicine’s C.S. Mott Children’s Hospital, almost two-thirds have felt mom-shamed. And according to my very unprofessional Facebook post in a local group, even using the term “mom-shame” warrants counter-shaming: “Stop with the mom-versus-mom narrative,” snipped a stranger. “It’s antiquated.”

I think so too, but then I scroll down: I see moms begging for signatures on petitions to lower class sizes; moms who feel tapped out and instead have hired outside help; moms who will home-school or un-school or free-school; moms who have quarantine bubbled then de-bubbled; moms who say attending school is a child’s human right; moms who insist safety trumps education; moms who think the whole pandemic is a media hoax and moms who simply can’t handle it anymore.

Below each are hundreds of comments with various degrees of disagreement, criticism and vitriol. “I don’t care if they duct-tape mine to a pole,” said one on a return to day care. On the opposite side of the mom spectrum, “You should probably meet my amazing kids before you start judging my parenting practices.” Countless varieties of the old “then-you-shouldn’t-have-even-had-kids” are scattered cruelly in between.

It took a pandemic, but dare I say we’ve reached the apex of mom-shame. The good thing about peak anything, however, is that there’s nowhere to go but down.

Though some might disagree, I like to think I’m part of the solution. I usually pretend to be immune to mom-shame, and I’m always passionately opposed to it — I try my best not to do it, whether deliberately or inadvertently. But the truth is it used to be a whole lot easier to not mom-shame. Pre-pandemic, the trick was to just keep your mouth shut.

“If two moms are sitting on a bench with their babies and one is breastfeeding while the other’s bottle-feeding, those are mutually exclusive,” said New York–based reproductive psychiatrist Alexandra Sacks. Whatever either’s thinking, they can both subscribe to a laxer “You Do You” parenting philosophy. “Not so when it comes to issues of [coronavirus] exposure,” she added.

When one parent’s actions directly affect the health of the other’s child, when it’s not exaggerating in the least to say that our children’s lives are on the line, it’s no wonder that polite tolerance has gone the way of crowded music festivals. “For so many parents, these are the highest stakes they’ve felt in their whole lives,” said Sacks.

This fall, too many American moms (and I’m deliberately saying moms, not dads or parents or families, because 80 percent of moms say they’re managing the majority of home-schooling) face an impossible decision. Not a vague ideological position, an actual check-your-preferred-box-and-sign-at-the-bottom choice: Will you be sending your child back into the classroom? Committing to virtual learning? Withdrawing them entirely?

Your decision can feel rife with meaning. “Taking care of children is not just a thing we do anymore but a representation of who we are,” said Kim Brooks, author of 2018’s “Small Animals: Parenthood in the Age of Fear.” In 2020, it’s like someone cranked the dial on a simmering pot. “When everybody is scared and nobody feels supported, they find a scapegoat or blame someone else. These are primitive defense mechanisms,” she added.

Sacks sees a common psychological trapping. “Competition and criticism of others is so often a projection of insecurity and instability,” she said. The pandemic is a perfect storm of both: Internally, people lack confidence to navigate a novel and unpredictable situation; externally, they lack the social and structural support systems they desperately need. Put those two things together and one can manifest as a mom-shamer.

Now check your box but also read the subtext: Are you an exhausted mom desperate for normalcy? Are you a supermom who’ll frantically juggle your kids’ online curriculum atop your day job? A privileged mom with a pricey nanny or a private learning pod? A traditional mom willing to toss your career under the bus to home-school?

Only it’s possibly all an illusion. “This is being presented to us like we have choices when most of us really don’t,” said Biz Ellis, podcast host of One Bad Mother (its expressly anti-shaming motto is “You’re doing a great job!”). “And when you don’t have a choice, it’s really easy to lash out at someone who seems like they did.”

The “Mean Girl” variety of mom-shame is real and rampant, but so too is the self-imposed kind. “It’s a guilt we put on ourselves,” said Ellis. For example, were she to post a pic of her kid focused at a Zoom meeting, it’s not a dig at another parent whose kid can’t sit still. “These things can feel at you — but they’re not.”

So a mom-shamer who slyly types, “That’s unfortunate,” on another’s plans to home-school (true story) likely has deep doubts about her teaching skills. A stay-at-home mom who snaps, “Now you know how hard we work,” (also true) has felt invisible and unappreciated for years.

And it turns out that my mom-friend who can’t play anymore actually thought I was cutting her out. I wasn’t, and didn’t, and won’t. In fact, except for the six feet between us, we’re actually closer than before. 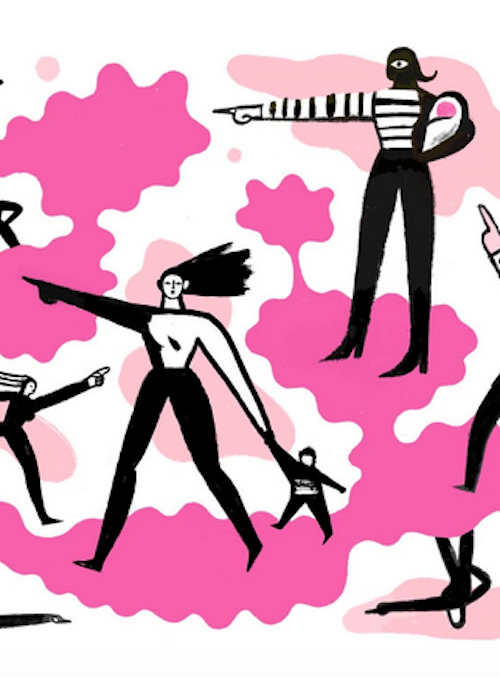