Brad Smith – former Toronto Argonaut turned Canada’s Bachelor – is 41 minutes late to call me. If he were my network-arranged fiancé, now’s about when I’d deliberately burn his dinner. But since he’s someone else’s bad date, I try to stay positive.

Brad Smith! A CFL wide receiver, don’t you know. Quebec-born, well-bred son of former CFL commissioner and current Conservative Senator Larry Smith. Brad’s stats: He’s 29, 6 foot 1, and 188 pounds – according to Wikipedia, of course. Brad’s not nearly as punctual as he is strong.

“I take this experience very seriously, and I truly believe in the process,” Smith said to someone, not me, before he began his nine-episode adventure with The Bachelor Canada, which premiered Wednesday on Citytv. Expect palm trees, helicopter rides, and girl-on-girl drama.

Here, Smith is looking for an independent, intelligent woman who likes waiting by the phone.

“A sense of humour is a turn-on,” he told Citytv (I’m a shoo-in!), but then added: “Someone who is high maintenance turns me off!” (Maybe nevermind.)

Luckily, Brad has a harem of women who aren’t currently colouring in his eyes with black pen. Among the “ladies in waiting” revealed on Breakfast Television: Chantelle, a 25-year-old pastor who hasn’t dated much, obviously, but shelved her faith in favour of bikinis for inevitable hot tub scenes. Melissa Marie, 28, is a Playboy model and “guys like that for sure,” she explains.

Says 25-year-old Tia B. from Ottawa: “Love is love and you can’t force anything,” except maybe a televised proposal and consequent contractual marriage. Rebecca, aka “Bubba”, is a 27-year-old real estate agent from Toronto. “I hope the Bachelor is good looking and super rich,” she says. (Don’t you oddly appreciate her honesty?)

Bubba is in luck! Smith’s pretty hunky with sure piles of football dollars that, should a nagging trophy wife play her cards right, might later fund his etiquette classes. It’s just not polite to leave a lady hanging by the phone, Bradley – for an hour and 22 minutes, but who’s counting?

It’s situations like this one that have women, except perhaps the fame-hungry televised variety, burnt out big time on the reality of love. But there’s good news for the human race: A new survey from Match.com found that, despite what long lines of short-skirted aspiring actresses might have you believe, less than 10% of Canadian women would go on a reality series to find love.

In addition, the survey found that 45% of single Canadians believe a first date on national television would be the most intimidating of all first dates.

But if you think a televised date is the most awkward date there is, do consider entertainment journalism. For the record, I’ve been by the phone waiting for almost two hours, pathetic irony not lost on me. I didn’t get my call, let alone a single red rose, and that suits this “lady in waiting” just fine. 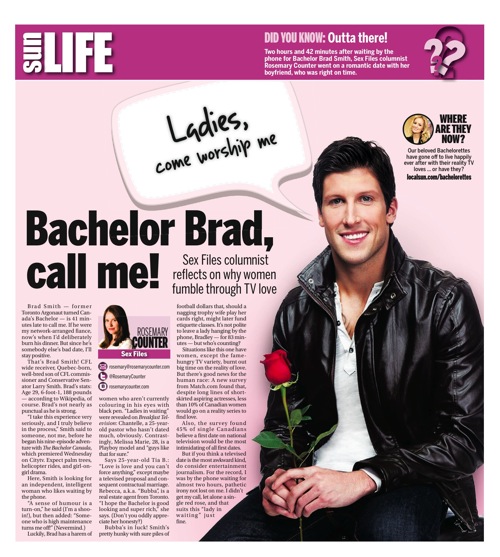