He loves you; he loves you not. Why celeb crushes intoxicate us.

It’s a Sunday in June and a relaxing stroll down Queen Street just isn’t happening. It’s award season in Toronto, and hundreds of sweaty fans in gladiator sandals and short shorts have waited all day—the hardcore fans have even camped overnight—in hopes of getting close to this season’s reigning pop prince, Justin Bieber, at the MuchMusic Video Awards. The Stratford, Ont., native, now the ripe old age of 16, has gone from hopeful YouTube nobody to number one on the Billboard charts—and straight into the non-threatening romantic fantasies of tens of thousands of burgeoning teen sexualities. It’s like baby, baby, baby, oh!

“What would you say if you met him?” I ask Stephanie and Taylor, both 14. They are here with Taylor’s mom, who seems suspicious that I may try to kidnap them, and are wearing matching midriff-revealing Bieber T-shirts. Each girl has “#1 Belieber” written across her forehead. Stephanie screams at the mere thought of a real-life Bieber run-in, so I turn my attention to Taylor, who looks serious and introspective. She thinks hard for a moment and then says purposefully “I love you.”

Despite unsuccessfully concealing a scoff (that artificially windswept baby face? I mean, come on), I’m not making fun. I can’t, and here’s why: Once upon a time, 1997 to be exact, I saw Titanic in theatres—six times. (That’s almost 20 full Leo-hours.) I bought piles of Tiger Beat magazines and plastered images of Leo by the dozen across my walls. I’d await the daily Titanic segment on Entertainment Tonight, which I’d record manually, of course, on my hands and knees—on VHS. I even wrote Leo a fan letter, to which he didn’t reply. Nonetheless, I was certain that this was love.

“Fandom is in no way a kind of love,” declares Dr. Carla Fry, a Vancouver-based psychologist who specializes in adolescents. The feelings of my sensitive tween self are slightly hurt, but we continue. “It’s obsessive idolism, but if you’re 12, you don’t know that so you can’t tell the difference,” she says. It wasn’t love, she says, but a complex mix of factors—biological, psychological and otherwise—that caused my Leo habit.

Biologically, the brain’s prefrontal cortex—the controller of reasoning and judgment—experiences a growth spurt around puberty, according to researchers at McGill University in Montreal and the National Institute of Mental Health in Bethesda, Md., that might cause impulsive or risky behaviour. Then there’s actual puberty, of course, when hormones and emotions run amok in the mind and body. Factor in a sudden lack of similarly developed young men and that can leave a romantic young girl in a serious moody funk. “Dopamine and serotonin levels are very connected to happiness and depression,” says Fry. Anything that brings you pleasure—whether it’s chocolate, your favourite song or another trip to your local Cineplex—gives your brain a shot of chemicals. “It’s a natural drug—there’s no doubt about it,” she adds.

Or maybe it’s genetic. Rewind to 1966, when a little band known as the Fab Four made its last Canadian performance ever at Toronto’s Maple Leaf Gardens. In the sixth row, in a red-cuffed dress she sewed herself for the occasion, was my then 14-year-old mother—no doubt screaming hysterically like all the black-and-white Beatlemania footage that has since been etched into our psyches. “I was certain I was going to marry both Paul and John,” she says. For her teen brain at the time, “This didn’t present a problem.”

As such, she let my Leo problem slide. In fact, let’s be real: With every crisp bill and carpool to the local theatre, she funded this madness. Recent research has found that the average Canadian teen has a disposable income of $131 a week and hits the mall 54 times a year. Loitering for leisure is just one reason why Statistics Canada found teenagers, contrary to what The Smiths would have us believe, to be the happiest age group in Canada. And why not? Most have money but no bills, freedom but no responsibilities, good health and a whole lot of leisure time to spend daydreaming.

“What you’re describing isn’t obsession,” says Fry. As long as you’re not convinced that the Jonas Brothers are talking to you through YouTube (I’m not, I assure her), your fandom is likely something she calls “passion-filled optimism.” There’s something about Leo, she says, but it’s not his sky-blue eyes or streamlined physique; it’s his success, drive and fame. Leo represents the possibilities that life offers and, for idealistic young women stuck in their parents’ houses, dreaming big can be a serious turn-on.

And as real life gets more exciting and their time and money are spent on attainable goals (though they’ll probably still want those gladiator sandals), most fans grow out of fandom. These days, I’m reformed—albeit sufficiently embarrassed—and function most of the time as a normal member of society. I hang art instead of posters, prefer my men in the flesh and haven’t seen Inception even once. But does the off-chance that Leo reads this and finally returns my letter excite me terribly? Well, let’s just say that somewhere my tween self is screeching as the new me plays it cool.

Heartthrobs Through History
Think no one ever loved Joey Lawrence as much as you did? Get real. Here are five Hollywood heartthrobs that prove that some things never change.

Rebel hero James Dean (1950s): The Quaker-raised bad boy made T-shirts the forever-popular youth uniform when he donned a muscle-revealing classic white tee in Rebel Without a Cause.

Partridge pretty boy David Cassidy (1970s): A stampede to the front at the pop sensation’s London concert left 650 fans injured, 30 taken to hospital and one dead.

My boyfriend Leonardo DiCaprio (1990s): Teary girls won’t ever let go of Jack Dawson, flocking to theatres (some of us more than others) to make Titanic the highest-grossing movie in history at the time. 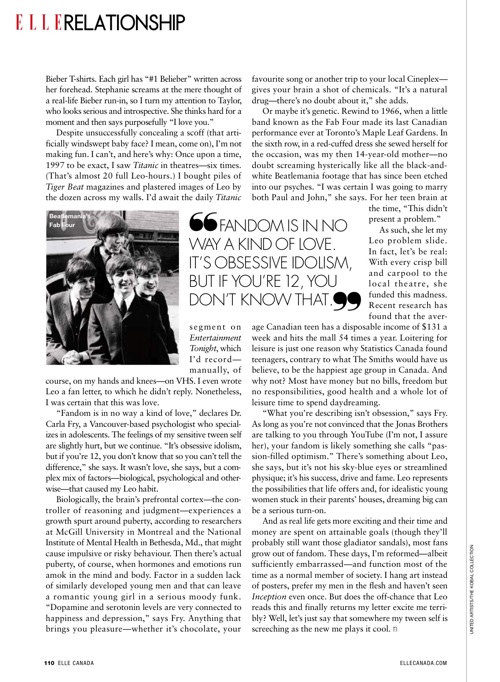