Millet’s spiral from jealousy into obsession becomes her own diary, which is then dressed up as this book

What do you write after you’ve written a tell-all memoir? For French art critic turned literary exhibitionist Catherine Millet – whose X-rated 2001 The Sexual Life of Catherine M. rivalled The Story of O as the “most explicit book about sex ever written by a woman” – you must reluctantly peel off another Chanel layer.

“Now I am writing a new autobiographical book,” she pens from her Paris flat, to appear “after the publication of the first book, as a necessary extension to it.”

But her new memoir, the aptly titled Jealousy: The Other Life of Catherine M., raises a new question: Has Millet been, uh, faking it?

Her unravelling (or perhaps it’s an unveiling) begins with Millet’s discovery of risqué photographs of a naked young woman and consequent reading of Jacques’s diary. The reader is never privy to the diary’s dirty details, except for some succinct points to ponder, like “Doubts about Catherine. Affair with F.?” and Jacques’s confession to six extramarital affairs (mild, by Tiger Woods’ standards).

Though Millet has long known of her husband’s indiscretions – she too has had many of what she calls “parallel lives” – her façade is nonetheless crushed. (Note that all this happens before she’s penned her original sex memoir.)

Millet’s spiral from jealousy into obsession becomes her own diary, which is then dressed up as this book. For anyone with a jealous streak (I’m admitting nothing), Millet’s desperation – she’s often reduced to all fours, peeking into Jacques’s office to scan his letters frantically – brings a cringe-worthy knot to your stomach. Again, Millet excels at the physical: “a dry, glacial wave came over my body. … My blood, which felt as though it was draining out of me, and my belly, which seemed also as if it might need to empty itself, were forerunners of my spirit, which was trying to escape.”

But without spoken quotes and largely plot-free, Jealousy relies entirely on Millet’s stream of consciousness, bouncing from childhood to her thoughts of the art world to her floundering marriage. Her endless self-reflection ranges from the cliché (“I placed sexual accomplishment at such a premium … not just to mask pain, but to get high”) to the painfully obvious (“perhaps if I’d behaved less casually, I would have been better able to understand what pleasure meant to me”).

Quite rightly, Millet is seated in a therapist’s chair by the book’s conclusion. Though her efforts are commendable, she frustratingly skims over her brother’s untimely death, her prostitute-hating mother’s suicide, the fact that “my father also had a mistress, or possibly several” – all of which are more telling of her psyche than yet another sexcapade. (But don’t get your knickers in a knot, there are some smutty tidbits too: By now, Millet’s doing all her she-boppin’ to fantasies of Jacques with other women.)

Though raw and sometimes awkward (what does that remind you of?), Jealousy‘s weakness is somehow also its strength; if possible, Millet is more naked than before. Gone is the flat, pseudo-liberated sexual dynamo; in her place is a vulnerable and frustrating woman plagued with insecurities. She often dwells on her “average” physical appearance, mostly through others’ lenses: “I have come across a diverse range of opinions as to my appearance, some flattering, others disparaging: too pointy for some, too chubby for others.” And, now 60-plus, she goes as far as grumbling, “If I was going to have to compete with twenty-year-old rivals I had better try cosmetic surgery.”

Although free love is suddenly feeling about as empowering as Gloria Steinem’s eye job, Millet’s doubts run even deeper. Peeking through her text are hints of Millet’s real insecurity: her writing abilities, her status as an artist, her future now stripped of sexual visage. Needless to say, Millet is reflective (“all writing entails a process of objectification … the aim had been to detail the maximum possible number of erotic situations”), apprehensive (“there is always a distance between the public and a person who puts herself on display”) and just plain nervous (“I am not always as acute as my eye is sharp – as you can see from this book”). In other words, she’s a real writer now.

Luckily for Millet, however, maybe Jealousy‘s descriptions aren’t so different after all: “The force of the words rose up within me, I had to release them, the reflex as impervious as if, having held my breath for too long, I had to start breathing again.” The little death of Catherine M. The gimmick is the birth of Catherine Millet, the Real Person. Not quite as sexy, perhaps, but c’est la vie. 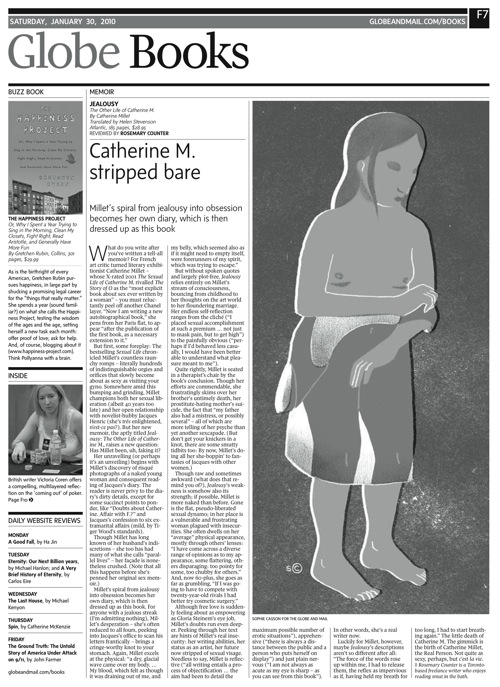