We all have them – and that’s not necessarily a bad thing. But are yours a sign of high standards or simply hang-ups in disguise?

Deal breakers to break
Donna, a 32-year-old mother and personal support worker, had been on Lavalife for just two weeks when Jason messaged her. They chatted online for six hours, but Donna was surprised when she eventually clicked on his profile and saw that he was Chinese. “I’d always assumed that I’d marry a white guy,” she says. “That’s just what I’d pictured.”

For many women, race – like age – is a basic deal breaker because of internalized ideas of what our future partner will look and be like, explains Bethany Marshall, a relationship expert and author of Deal Breakers: When to Work on a Relationship and When to Walk Away (Simon & Schuster, 2008). Sound familiar? If so, it’s time to move past the partner you’ve been fantasizing about and pay closer attention to the one at hand.

So, unless Jason’s heritage challenged the kind of partner Donna desired (it didn’t), this wasn’t a deal breaker; it was a hang-up that blocked her off from possibilities. “If your deal breaker is based on a stereotype, then you turn your relationship into a stereotype,” she says. More importantly, you might be missing out on the opportunity to fall in love. Donna, for one, decided to toss her preconceptions aside and start dating Jason. Three years after that first online chat, they got engaged.

Deal breakers to keep
While it’s good to ditch your hang-ups, some deal breakers shouldn’t be broken. Take it from Julia, a 28-year-old residence coordinator who loves kids. She dated her ex for seven years, despite his adamant insistence that he wasn’t daddy material. “I always figured that he was young and scared and that, as he grew older, he’d change his mind about it,” she says. So Julia kept quiet and hoped for the best. “We had a really good relationship, but there was always this dark cloud in the back of my mind,” she says.

Ladies, this is a very legitimate deal breaker. “If he doesn’t want kids – or marriage or commitment – and you do, you should always take that seriously,” says Marshall. “If anniversaries and birthdays are passing you by and you’ve realized that nothing has changed, you’re putting both of you in a double bind.” (Another carved-in-stone sign that you should call it quits? If you’re always working harder at the relationship than he is.)

As Julia can attest, ignoring the issue isn’t your best course of action. “Toward the end of the relationship, we fought about all these seemingly stupid things, but really they were all stemming from this issue,” says Julia. “It was all just resentment that was brewing and popping up elsewhere.” These days, she’s single and looking for someone who is open to eventually having a family.

Deal breakers to discuss
It’s fair to say that Jessica – a 27-year-old science teacher with three degrees – is a bit of an academic. Her boyfriend works as a pipefitter. “His profession is a switch from men I’ve dated in the past,” she says, admitting that initially she was concerned that their different worlds would leave them with little in common.

Is a potential suitor’s job – or lack thereof – a deal breaker? A person’s profession is certainly a very important part of evaluating them, Marshall says, but it shouldn’t be your only consideration. By dropping that condition, you may gain something of much greater value.

Just ask Jessica, who has been happily dating her pipefitter for a year and a half. “Instead of talking about teaching all night, I get to hear about this crazy industrial world I never would have known existed otherwise,” she says. “Our relationship is a great change for both of us, and it works really well.”

How to pick a deal breaker
“Having no deal breakers is a bad sign,” says Bethany Marshall, a relationship therapist and author of Deal Breakers: When to Work on a Relationship and When to Walk Away (Simon & Schuster, 2008). “If you have no expectations, your needs will never be met.” She suggests that you start by thinking about what qualities you truly desire in a partner – be it financial stability, the desire to have a family, a wicked sense of humour or whatever else floats your boat.

Next, weigh his actions carefully against those objectives, but avoid making superficial judgments. The fact that he still lives at home? Not necessarily a game ender. But if he’s doing so because he’s waiting for his big break as an actor – despite the fact he hasn’t had a paying gig in years – it just might be time to call it a wrap. 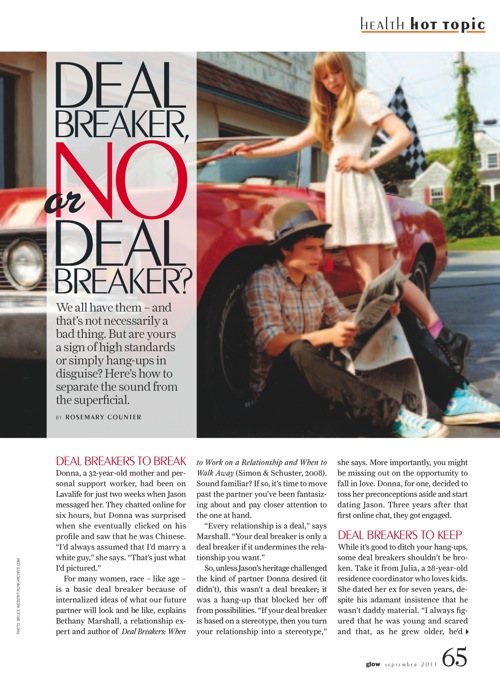 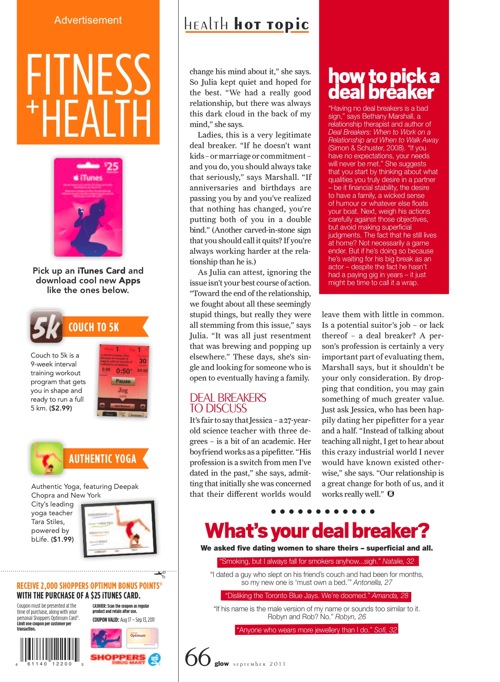