Everyone says the first year of marriage is the hardest. Half a century ago, this made perfect sense— getting hitched meant big life changes: moving in, merging money and life­ styles, finally losing your V­card and getting pregnant on the first night. These days, at least in theory, marriage should be easier; three­-quarters of us already live together, share bills and beds and are fully committed. Which, of course, begs another question: If you already have all that, then what exactly does marriage mean? Some say it’s just a piece of paper, a technic­ality with a tax benefit. If that were true, however, we wouldn’t hear those friend­-of-­a-­friend horror stories: final­ly tying the knot and then watching said knot immediately implode.

This fall, it very publicly happened to Brad Pitt and Angelina Jolie. After 11 years and six kids, Brangelina split just two years into their marriage. This is not a Hollywood­-specific af­fliction for the rich and famous. It happened to three of my friends, in­cluding one I’ll call “Jade,” who is willing to share her tale.

For 10 years, Jade and her fellow seemed just about perfect. “We were that couple—you know the one,” says the 33­-year-­old Torontonian. “Everyone said we were destined to be together.” He was her first love at 19, they shacked up at 25, and though there were no exter­nal pressures (ahem, pushy parents), a universal feeling crept into their set­up. “Soon I was turning 30 and I wanted to take the next step,” she says. “Even though deep down I knew I shouldn’t, I still wanted to get married.”

Her hesitation wasn’t because of a vague “bad feeling” or the universal “cold feet.” “Three months before the wedding, I literally threw my dress at him and screamed I didn’t want to marry him,” she says. It sounds crazy now, she admits, but big blowouts like this were the norm at their house. Despite outward ap­pearances, Jade and her man hid big problems behind closed doors. They fought constantly—about money, sex, communication, intimacy—and spent more and more time apart. Things were getting worse, not bet­ter. “I dragged him to counselling, but it was no help,” says Jade. (If their therapist thought they shouldn’t wed, she didn’t say so.) Yet getting married promised a solution. “When he proposed, I thought, ‘Okay, great, marriage means we’re really going to make it work.’ It proved to me that, despite everything, we were for real.”

It’s hard for outsiders to wrap their heads around it, and it’s all too easy in retrospect to recognize huge mistakes in the making, but situations like Jade’s aren’t uncom­mon. “There’s a distinct phenomenon behind this,” says Lucia O’Sullivan, a psychology professor at the University of New Brunswick who specializes in intimate relationships. “Research indicates that when people who have been cohabiting for a long time finally get married, it’s often because it’s seen as a solution to whatever’s not work­ing in the cohabitation agreement.”

O’Sullivan says there’s statistic­ally less stability in the first years of marriage, but it’s impossible to slap a number on breakup rates. Relationship statuses in Canada are getting murkier and more complicat­ed to track—so much so that Statistics Canada stopped trying in 2008. Its last report found that about 4 percent of marriages break up after one year, 16 percent after two years and 26 percent after three years—the “riskiest year” of marriage, at which point the divorce rate begins to steadi­ly decline.

“Many, if not most, of these rela­tionships have some degree of difficul­ty before the marriage,” explains Gary Direnfeld, a social worker based in Dundas, Ont., who was also the host of Slice’s fittingly defunct Newlywed, Nearly Dead. The show’s late­-night reruns showcase can’t­-turn-away, this­-could­-happen-­to-­you­-level marital collapses—some of the marriages just weeks old. He blames these disasters on a conflicting mix of old and new marital ideals. “Newlyweds are older now, they’re more set in their ways, less flexible and less prepared to com­promise,” he says. “At the same time, they all have the old magical thinking that says ‘My partner should fulfill all my needs, read my mind and be for­ever compatible.’” This thinking has reared its head in O’Sullivan’s research too. “When you survey people these days about what they’re looking for in a partner, many will talk about a ‘soul­ mate,’” she says. “We’re looking for someone who’s completely in sync and
fulfills every possible need for the long term and forever. We’re looking for a fairy tale, just like Brad and Angelina.”

Pressure to find a Brangelina­-level love is enormous, as is the urge to dis­play one’s love for the world to see. Social media makes this extra­ easy, and Jade continued to present her engagement happily to the world. (“57 days until I tie the knot with this beaut. So excited!!!” she posted on Facebook.) Researchers from Northwestern University found that people who were insecure or anxious about their relationship were actually more likely to brag about it on Facebook. The same logic applies to the wedding itself. A 2014 study (aptly titled “‘A Diamond Is Forever’ and Other Fairy Tales”) from Emory University found that weddings that cost more than $20,000 are three and a half times more likely to end in divorce than those that cost less than $10,000.

Subconsciously or not, hesitant brides and grooms can let themselves be buried and distracted by an ever­ bloating wedding culture. “The wed­ding took over, and I was so busy planning that I had no time to think about anything,” says Jade. Planning a wedding is inevitably stressful, even in the happiest of unions, but the deeper problems of on­-the­-rocks rela­tionships can be dismissed as wedding stress and wilfully ignored. “Too often, people are afraid to talk about big issues for fear it will raise the tension before the wedding,” says Direnfeld. That tension and those problems aren’t going anywhere. “You’re really just saving them up for later,” he says. “This can mean your problems are actually exacerbated post­-wedding.” Still, in the tense months before the wedding, “percep­tion can triumph over judgment.”

For the record, Jade says she had “one of the best weddings ever—and I’m not just saying that because it was mine,” she jokes. She invited 50 guests to her cottage, renting all the nearby lodges. She wore a sweetheart lace dress with a train and adorably incorporated their three dogs. “But it was a story we were playing that day. It was all false.”

The higher your expectations, the harder you crash back down to real­ity. All the problems you had before are still there but with the added pres­sure of “forever” weighing on them. And all those common­-law years of practice might not be as helpful as you’d think. “The truth is, the longer you wait to get married, the more relationship baggage you bring into the marriage,” says Debra Macleod, a Calgary-­based relationship and mar­riage coach who created a popular “Marriage SOS” program for newly­weds. She says there’s a distinct post­-wedding comedown that she calls the “post­-wedding blues” or a “honey­moon hangover.” “That’s when you get married and you’re so ridiculous­ly happy but then you have to go to work on Monday,” she says. “There’s this feeling of ‘That’s it? Now what?’”

Immediately post-­wedding, expect­ations of marital life often clash. “One person has been thinking ‘Once we’re married, things will be different.’ And the other person’s been thinking ‘Why should I change? You married me this way,’” says Macleod. Jolie filed for divorce for “the health of the family”—allegedly because of Brad’s weed and booze habits and because her lax par­enting style conflicts with Brad’s desires for a more structured, traditional family environ­ment—but it’s very likely these issues were there long before. “A fast mar­riage breakdown like this may just have been two people who didn’t have the same expectations of what life after marriage should be,” says Macleod.

“I’d spent 10 years waiting for him to change,” says Jade. “The wedding was really my last effort to fix every­thing, but it didn’t work.” Stuck at an impasse, she grew increasingly miser­able until she gave up four months later and moved back in with her parents. “I called my friend and said, ‘Please just tell me I lasted longer than Kim Kardashian!’” (With 139 mar­ried days, Jade beats Kim’s infamous 72 days of marriage to Kris Humphries by a landslide.)

Just like the wedding, this sad­-seeming situation is not neces­sarily as it appears. Jade went back to school, made new friends and healthier habits and is in a promising relationship. “Now that I know what I don’t want, I can see exactly what I do want,” she says. With her new boyfriend, kindness, communication and consideration are deeply appreci­ated and flow both ways. The lesson took 10 years and an embarrassing failed marriage, she explains, but was worth it nonetheless.

Headed (nervously) to the Alter? Ask yourself these 5 Questions

Why are you getting hitched? There’s a wide variety of good answers here. There are also some distinctly bad ones, like: you need to get married, you’re terrified of being alone or you don’t feel secure without a partner.

Are you choosing between getting hitched and breaking up? This is red-flag city. Sometimes people get married to resuscitate a relationship that should actually end.

Have you discussed what marriage will be like with your partner? Oftentimes these expectations are unspoken. If this subject feels too awkward to bring up, that’s a bad sign.

Are you anxious about the wedding or the marriage? Weddings are stressful times, and having “cold feet” is common. Nerves over the catering are normal—nerves about the rest of your life might not be.

Are you hoping for change after the big day? For some, that piece of paper means there’s no turning back and they’ll either make more effort or (more likely) less. But for most of us, things won’t change much. 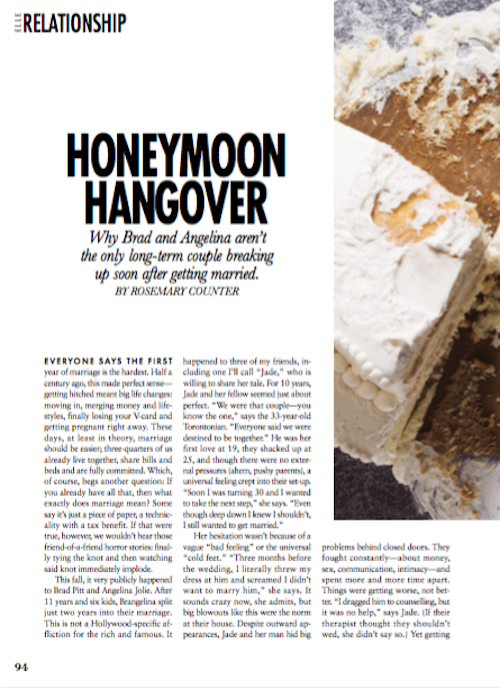 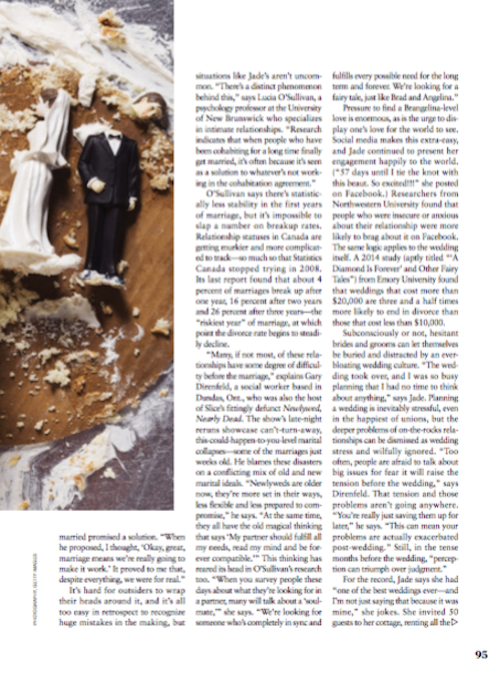 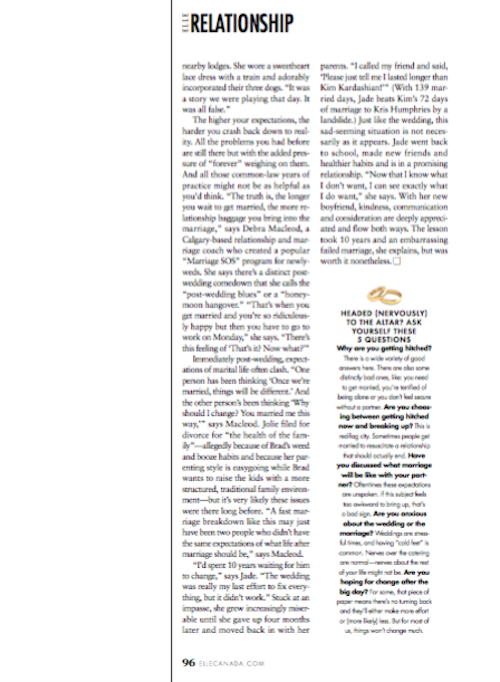