Did Joan Crawford’s Ghost Haunt the Set of Mommie Dearest?

And more unbelievable tales from the camp classic’s set on its 40th birthday, as told by Faye Dunaway, Roger Ebert, and Rutanya Alda (a.k.a. Carol Ann).

“My god,” wrote Roger Ebert when Faye Dunaway finally appeared from her dressing room on the closed set of Mommie Dearest. “She looks just like Joan Crawford.” He’d been given a rare peek at the secretive film’s production, and at Dunaway’s uncanny transformation by makeup artist Lee Harman—whose meticulous process, according to a Washington Post article, involved seven-plus hours and cross-referencing Dunaway’s face with Crawford’s using a Q-tip. Iconic thick eyebrows and blood-red clown lips were drawn atop Dunaway’s contorted face muscles. The final results were downright spooky. When Dunaway first emerged, “the set fell absolutely silent,” the actor wrote in her autobiography, Looking for Gatsby. “One told me it was like seeing Joan herself come back from the dead.”

Joan Crawford, for the record, had died about four years earlier. Everyone knows what happened next: After the star’s will mysteriously but expressly excluded two of her four adopted children, “for reasons which are well known to them,” eldest daughter Christina published the sensational exposé Mommie Dearest, alleging the Hollywood superstar was a narcissistic and abusive alcoholic rather than the perfect mother she’d long pretended to be. By 1981, the controversial book was being turned into a film. And with its sizable budget, lavish sets, and A-list star, the prestigious resulting biopic was considered a surefire box-office hit and Oscar shoo-in.

Still riding high from her recent Oscar win for Network, Dunaway saw in Crawford a role only she was brave enough to play. “The general sentiment in the industry was that anyone who played Christina’s version of Crawford would pay a price for taking on one of Hollywood’s great legends,” she wrote. The affinity was mutual. Years earlier, in a quote Dunaway gleefully repeated in the book, Crawford had declared, “of all the actresses, to me, only Faye Dunaway has the talent and the class and the courage it takes to make a real star.” Dunaway said she hoped her portrayal would “even the scales,” as she told Hollywood biographer Jane Ardmore in an article titled “I Want to Climb Inside Her Skin.”

Of course, that didn’t happen. Mommie Dearest, released 40 years ago this week, is now best remembered as a campy, over-the-top, so-bad-it’s-good all-time cult classic. But few know how gross, weird, strange, and, possibly, supernatural the set was behind closed doors.

Dunaway was a trained Method actor who set out not just to understand but to experience her character. She spent months researching Crawford, reaching out to Crawford’s friends and her hairdresser, even visiting her former home. But the two already had much in common, from their movie stardom to their reputations as “difficult” to their strong desire and long wait for motherhood. But there was one important distinction: Unlike Crawford, Dunaway was not actually a mommie before she was cast in the role. It was around that time that Dunaway chose to have her son, Liam—though in 2003, her then ex-husband would claim that Liam wasn’t their biological son. (Dunaway, notoriously private, didn’t publicly dignify that with a response.)

Caring for an infant while following a hectic filming schedule could not have been easy, and perhaps sleep deprivation could explain Dunaway’s increasingly erratic behavior documented in detail by her costar Rutanya Alda, who played loyal housekeeper Carol Ann. Her self-published book The Mommie Dearest Diary dished lots of juicy hearsay, like Dunaway insisting her then boyfriend be made a producer, keeping the whole set waiting for six hours at a time, ordering the lighting changed, and driving the wardrobe lady to tears. In the book, published more than 30 grudge-filled years after the film’s release, Alda also accuses Dunaway of refusing to acknowledge her on set and insisting that the camera be on herself during their scenes together. Alda even suggests that Dunaway may have tried to sabotage the publication of Alda’s book.

Dunaway was and is allegedly challenging on film sets—but by her own admission, Mommie Dearest was especially difficult. “A week into production the role really began troubling me. It is difficult to spend the day inside a character that is so dark, and not easy to shed the emotions, like the costumes and makeup, at the end of the day,” Dunaway writes in Looking for Gatsby. Then it gets weird: “At night I would go home…and feel Crawford in the room with me, this tragic, haunted soul just hanging around.” She describes “a chilly presence, a coming-in-and-sitting-on-the-window-ledge sort of thing.” Neither star, it seems, could rest.

That Dunaway was being haunted, literally, by Crawford began to appear in media reports. Of her voice, the Los Angeles Times wrote, Dunaway “appears to have borrowed it for 12 weeks from the ghost of Joan Crawford.” As if Crawford somehow wanted it back, People reported “another mysterious event on movie set” when Dunaway “suddenly lost her voice during a screaming scene”—which she later revealed to be her infamous “No wire hangers!” tirade. Other strange occurrences, noted People, included Crawford’s gowns going missing and an entire reel of film that came out mysteriously blank.

Strangest of all was Dunaway’s increasingly uncomfortable sympathy for Crawford. “She gave everything to this little girl, wonderful Christmases, wonderful parties, and judging by my research, a great deal of love,” wrote Dunaway. “And then to be so rebuffed and so coolly treated by this little Scandinavian girl. It was understandable to me that Joan did have areas that could erupt into anger and fury.”

Perhaps Dunaway was relating too much and getting defensive. Filming had “gotten real tense,” wrote Alda in her Mommie Dearest Diary, especially during the scene where Crawford forcefully cuts off her daughter’s hair. On the third increasingly violent take, claims Alda, nine-year-old actor Mara Hobel ran off the set in tears, crying, “she stabbed me, she stabbed me.” Dunaway’s autobiography skips the scissors part and describes the scene as “like too many scenes in the movie, violent and chilling, with no boundaries and no modulation.” Dunaway felt so badly, she adds, that the next day she bought the child a present.

The lines between Crawford and Dunaway were blurring, according to whispers on set. But if Crawford’s spirit lingered to tell her version of events, the ghost failed spectacularly. When Mommie Dearest premiered in September, the film was so far from the prestige it promised that audiences erupted into raucous laughter. Reviews were brutal, even Roger Ebert’s—which began, “I can’t imagine who would want to subject themselves to this movie.”

Rather than Oscars, the movie swept the 1981 Razzies—and, nine years later, won their award for worst movie of the decade. Christina Crawford denounced it, and Dunaway retreated to England in its wake. Mommie Dearest became a cult classic, “No wire hangers!” ubiquitous, and Crawford an icon of camp that still reigns—even 40 years after her so-called fall from grace. Maybe the ghost of Crawford had her way after all. 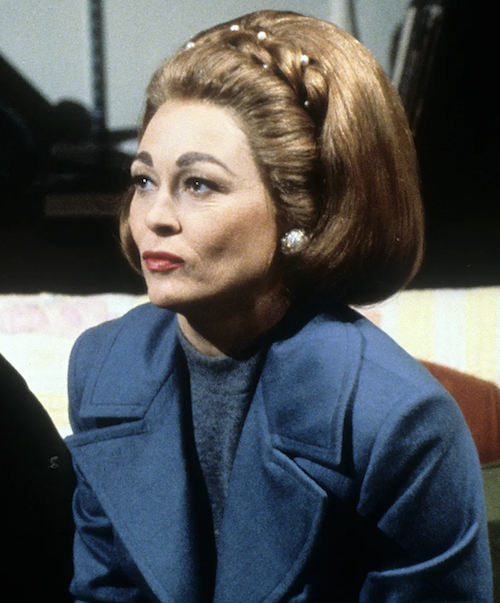