Full of Woe: Wednesday Addams Through the Ages

How fiction’s goth girl has changed through the decades

For roughly a quarter of a century, Wednesday Addams was the sullen nameless daughter in a recurring New Yorker cartoon drawn by Charles “Chas” Addams. Only as his imagined family was headed to television screens, did Addams name his characters. While he struggled with some, like Pugsley (formerly “Pubert,” a crass impossibility for television in 1964), the name Wednesday—a nod to the child full of woe from the nursery rhyme—stuck from the moment of suggestion. “It’s perfect,” Kevin Miserocchi, an old friend of Addams’s and now director of the Tee and Charles Addams Foundation, tells Vanity Fair of Wednesday’s unconventional moniker. “It tells you everything you need to know about her.”

Of course, everyone already knows Wednesday Addams—at least, they think they do. The only daughter of Gomez and Morticia Addams is pale with dark braids, wears a white collar atop an all-black outfit (sometimes accessorized with a handheld skull), and obsesses over the macabre while delighting in torturing (literally, usually) her younger brother, a lovable dummy in contrast with her deep-thinking sensitive soul. Look beyond these key touch points, however, and you’ll see the gothic tween Wednesday Addams has changed, in ways subtle and extreme, over the more than 80 years we’ve known her. As yet another version and variety of the iconic child goth lands, this time as portrayed by Jenna Ortega, from the mind of Tim Burton on the new Netflix drama Wednesday, here’s a retrospective look across mediums at the ever-evolving Wednesday Addams.

In print: The New Yorker

Two years after he began drawing his namesake family for The New Yorker, where he’d been publishing cartoons as a freelancer since his early 20s, Chas Addams introduced a child into his macabre world. According to Miserocchi’s The Addams Family: An Evilution, in June 1940, “the first inkling of an idea about a sad little girl possibly facing the world on her own” skipped rope beneath a street light all alone on a city sidewalk. The caption below: “Twenty-three thousand and one, twenty-three thousand and two, twenty-three thousand and three…” The character’s big round eyes are anxious and sad, but “unlike the other cartoons,” explains Miserocchi, “Wednesday’s pupils are all black with no whites in her eyes. From that alone, we know that Wednesday is dark.” As sad as she is in the outside world, however, she’s content and even happy within her own family—whether guillotining her doll alongside Pugsley, baking bat cookies with Granny Frump, or playing This Little Piggy at bedtime with Gomez. (This Wednesday, by the way, has six toes on one of her feet.)

While today Wednesday is immortalized wearing all black and white likely because of The New Yorker’s comic—when Wednesday appears in full color in this era, her familiar collared tunic is sometimes revealed to be teal blue. Her trademark long braids, meanwhile, took form over time. “[Chas] was an artist who was always experimenting,” says Miserocchi. Even though a daughter was a later addition to the family, he adds, “Wednesday developed as he did, and I think he appreciated her more and more as he went along.”

Some still don’t agree on which came first, but safe to say that neither The Addams Family (on ABC) nor The Munsters (on CBS) would have been greenlighted had the other not existed. After a few squeaky-clean decades of perfect American families, two similarly ghoulish clans debuted days apart in September 1964. They aired for two parallel seasons, on Thursday and Friday nights, and were endlessly compared and conflated. Even today, Miserocchi says he has fielded questions about Addams’s lost blond daughter.

Wednesday’s counterpart was Marilyn Munster, the teenaged adopted niece and only “normal” member of her family of monsters—that is, she’s blond and beautiful, though in her particular world, a pitiable freak. Wednesday of this era is played similarly by Lisa Loring as a normal happy child in a normal happy family who just happen to be morbid goths. The first Addams family member introduced on the premiere episode, Wednesday politely answers the door. She’s shorter than the height of the doorknob and is promptly revealed to be six years old and the younger sibling of eight-year-old Pugsley. Miserocchi suspects the inversion was related to casting, though, like most every other character in the series, Wednesday has been noticeably softened for TV. Her hair is a natural brown rather than severe black, though her always-worn tunic is otherwise entirely faithful to the cartoon—appearing black on the screen and blue-green in real life. Colors were often not what they seemed, as when a color photo of the set was shared a few years ago, fans were shocked and horrified to learn the family’s living room set was actually bright bubblegum pink.

Having never heard of the Addams family, nine-year-old actor Christina Ricci didn’t particularly want to audition for the role of Wednesday. “[My mom] said this part would be easy, you just say your lines completely monotone,” Ricci tells VF. She did just that to nab the role that helped launch her career and defined a new generation’s image of the family’s dark daughter.

In an era more receptive to female teenage angst, Ricci’s preteen Wednesday returns to her brooding roots and then turns the dial way up. She’s apathetic, psychopathic, and borderline homicidal as she instructs her brother to sit in an electric chair. (The game, she explains, is called “Is there a God?”) But however murderous, the Addamses love each other as families should. “Wednesday was allowed to be just who she was,” says Ricci of the oddly ideal Addams family. “She’s never asked to change or compromise or hide who she is.”

Style-wise, Ricci doesn’t think Wednesday would have cared much about her clothing. “She didn’t stray much from her uniform, which I was totally fine with because I love a uniform,” she says. Wednesday’s go-to this time, under the purview of the 1991 film’s British costume designer, Ruth Myers, is a white Barrymore collar atop vintage button-down dresses with delicate prints, which added variety amongst the many, many black costumes. And though they were largely covered by her hair—“definitely a wig,” laughs Ricci—this Wednesday has her ears pierced with skull studs.

On Broadway: The Addams Family: A New Musical, 2010

In April 2010, Krysta Rodriguez originated a Broadway-bound take on Wednesday Addams: She’s 18, secretly engaged to a normie guy named Lucas, and love is making her very un-Wednesday-ish indeed. In “Pulled,” she fawns over “puppy dogs with droopy faces, unicorns with dancing mice, sunrise in wide open spaces, Disney World—I’ll go there twice!” The musical’s whole plot revolves around Wednesday growing up, so it’s no surprise perhaps that her pigtails were symbolically chopped into a chic bob. Lest we don’t recognize her at all, however, grown-up Wednesday wears a childish (and super-short) dark green tunic, sometimes atop sexy black pleather leggings paired with white lace-up boots with kitten heels. The New York Times panned the musical as “genuinely ghastly,” but the pervasive power of the beloved family made the show a hit all the same.

“When I first saw pictures,” says Ricci of the newest Wednesday, “I thought it was so smart how they kept the original spirit alive—from the comics, really—while dressing her in a much more modern, relevant way.” This was the big, risky task of costume designer Colleen Atwood, who dresses the headliner in Tim Burton’s Wednesday. This time, she’s 16, expelled from public school, and sent away to the Harry Potter–esque Nevermore Academy, filled with supernatural cliques of werewolves and sirens. (Without giving anything away, yes, this Wednesday will indeed discover some powers of her own.)

Atwood looked briefly at Wednesdays past, especially Addams’s drawings, then freed herself to get creative. “Aging her up involved combining the old look with elements of today’s world,” she says, citing the character’s edgy platform shoes and hand-painted striped uniform jacket. For the first time, and even within the limitations of a school uniform, Jenna Ortega’s character wears different outfits for different situations. “She’s more of a real person and less of a cartoon character,” says Atwood.

The challenge for Atwood is to “introduce another side of the character, make them new and different, but also familiar and instantly recognizable.” The paradox is the fun part for Atwood, who plays equally with the original costume (“namely the black and white and the collar, which I made bigger and pointer”) and entirely new looks. For example, what would Wednesday Addams wear at a school dance? Atwood assumed such a dress didn’t exist and she’d certainly have to design and sew it, but she was wrong. “I was in London at Alaïa and saw this dress on a stand and thought, Oh, my God, that’s it,” recalls Atwood. “I made my assistant try it on and dance around the store.”

And the iconic braids? They stayed, thankfully. “We played around with all kinds of hairstyles, but always came back to the braids,” she says. They added freckles to her face and bangs that “make her less severe, more approachable.” Burton’s Wednesday explores modern issues like inclusion and tolerance, and even his star is set to learn a few things, adding complex new depths to a character you thought you already knew. Chas Addams, Miserocchi thinks, would be thrilled with this take on Wednesday, who “turned out to be the most interesting character in the bunch.” 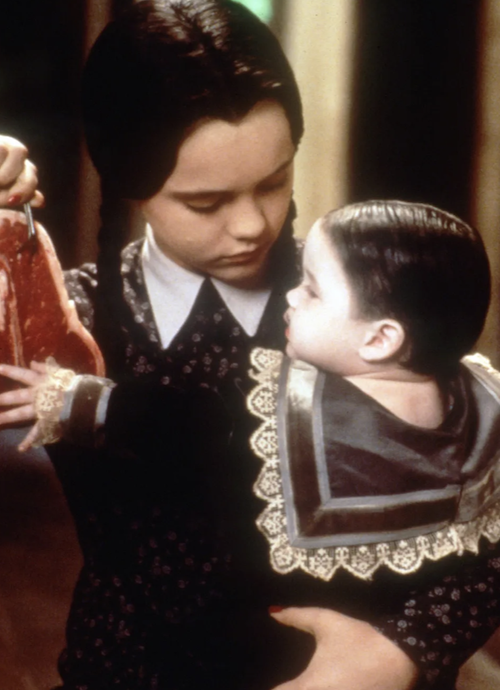