For most Canadians, the holiday season conjures images of snowstorms and crackling fires. That’s OK, I guess, but for a few lucky Canucks – myself included – the holidays bring sun and surf instead. Before you scoff at tradition lost, let me explain: My family’s annual vacation to Florida isn’t just about escaping the frigid weather and scoring an enviable tan (though both are nice, I must admit). This is a family tradition, with roots extending back to 1933.

My grandfather was 10 years old when he was diagnosed with pleurisy, an inflammation of the lining of the lungs and chest that killed Benjamin Franklin and Karl Marx. The doctors operated on my grandfather’s lungs and, because it was the middle of winter, he was sent south to recover. He missed most of that school year, staying with his uncle John in what’s now the Palm Beach Yacht Club, an old two-storey house on Lake Worth.

Lucky for all of us, Grandpa recovered just fine, took over the family farm and got married. By 1961, when my mother was 10, Christmases in Florida were back in full swing. At that time, the drive took four whole days of weaving along local roads through Pennsylvania and Washington, D.C. – even then, there was still no big highway. They went every year, the family growing rapidly. When the kid count hit a whopping total of eight, they all travelled in a renovated school bus (complete with kitchen and running water) that they had painted electric blue. “Those were hippie times,” my mother explains when I roll my eyes. I guess you had to be there.

Then the kids grew up, married and had their own children, until there were way too many to ever fit into a bus. These days, though my grandparents are both gone, the entire extended family – aunts, uncles and countless cousins, and friends are always welcome – still make the haul through the snow to meet in Florida. For two weeks, we rent a half-dozen condos, one per family, and spend the holiday season lying by the pool together.

And as we keep old traditions alive (including a Christmas cake recipe far older than I am), we make new ones as we go. A recent development is the New Year’s Round Robin Potluck, which was invented by my aunt Janet for the millennium bash – and then stuck. Champagne in hand, we travel from house to house: appetizers at one condo, salads at another, main course somewhere else and, well, you get the idea. “The food’s good, the company’s pleasant, we have lots of fun and don’t have to go anywhere,” my mother says. I like it too: There are no lineups or cover charges, and you don’t need to bring a date.

We all hope that years from now, the whole family – having multiplied again, no doubt – will still have the want and means to spend Christmas together in the sunshine, decorating palm trees and watching afternoon football. Not just to keep tradition alive, but because we simply can’t imagine a Christmas with snow. 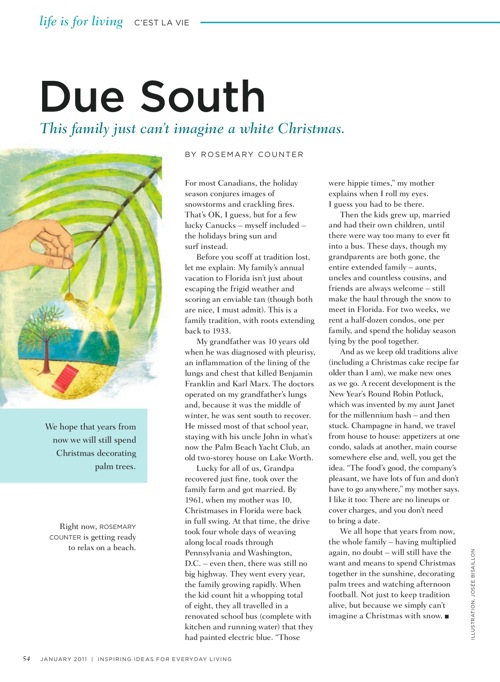