In her very first week of articling, lawyer-in-training Amanda Faulkner made a spectacular mistake. “While trying to click and drag a document, I somehow managed to delete my boss’s entire file directory and all its contents,” she explains. Making a frantic situation even worse, it was 5 p.m. on a Friday. “I believed 100% that I was going to be fired and not get called to the bar.”

When it comes to failures, both personal and professional, we’re usually bombarded with cheerleader-esque advice: Move forward! Move on! Don’t dwell! But a new school of thinking holds that shaking it off isn’t always wise. Instead, its adherents advocate taking the time to think through your failure. Rising Strong is Brené Brown’s guide to picking yourself up after what the University of Houston professor calls “face-down in the arena” moments. “We like recovery stories to move quickly through the dark so we can get to the sweeping redemptive ending,” she writes. But instead of dusting yourself off and getting on with it, Brown suggests you “slow down the falling and rising process.”

Research backs up her approach. A 2011 study in the journal Anxiety, Stress & Coping found that students who completed daily written reports on their failures could reframe and accept setbacks better than those with less-successful strategies (like denial, distraction and self-blame). Despite everything you’ve been told, you should dwell on your failures.

It’s easy to appreciate failure in retrospect, especially if—like rags-to-riches storyteller J.K. Rowling—your early defeats have since morphed into massive successes. But don’t wait until you have the benefit of hindsight to think through your defeats and mistakes. Monika Becker of Vancouver’s Clear Directions Coaching regularly counsels clients through professional failure, though she doesn’t love the F-word. “It’s overused and wrongly used—as if it’s definite and over,” she says. “But it’s not. I see failure as progress. If you’re not failing, you’re not evolving.”

Becker speaks from experience: She miscalculated her finances when she first left her day job to pursue coaching and found herself in need of supplemental income. “I had to admit I wasn’t quite there yet and needed a part-time job,” she recalls. “I had to go back and ask for work.” Her former employers were forgiving, but Becker says bosses should also prompt subordinates who fail to reflect on their mistakes. “Rather than downplaying [failure] to comfort employees, managers should encourage them to take responsibility and own their experiences,” she says. Look closely at the situation without judgment or blame, and find a solution together, she suggests.

If the failure is your own, Becker says the first step is getting up and walking away for a while to remove yourself from the situation. Then she prescribes a dose of self-reflection. “Look at your contribution and how you may have self-sabotaged, but also the things that happened around you,” she suggests. That’s not the same as personalizing it—thinking I am a failure won’t get you anywhere. Reframe whatever you’re calling a failure into a learning experience that’s making you smarter.

Faulkner dried her tears and called IT, who worked their magic to restore the mysteriously lost files. “Everything was OK, but I’ll never forget the day I almost ruined everything,” she says. That’s not a bad thing. “I know now it’s a part of life, and failures are a sign you’re reaching for something.” The would-be disaster even had a silver lining. It exposed a systemic weakness the firm didn’t know it had, and a partner emailed all employees to warn them, which brought newbie Faulkner right into the fold. The firm even gave her failure a memorable nickname: the Faulkner F–k-Up. 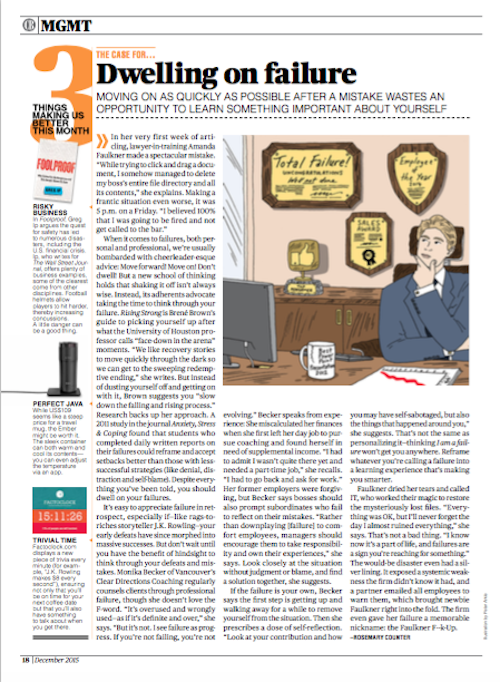