Everything I Know About Feminism I Learned From Working Girl 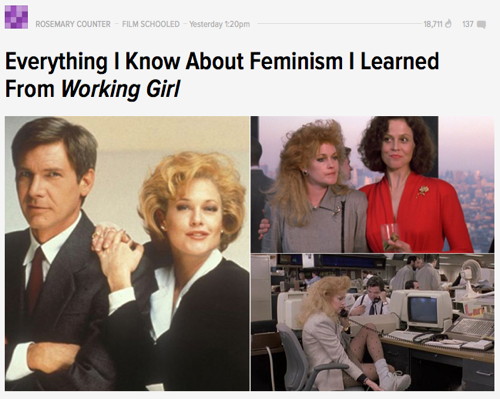 The year was 1988. Margaret Thatcher became the longest-serving Prime Minister of the century, Canada struck down its anti-abortion laws and Joan Jett topped the Billboard charts. Women’s full-time employment had skyrocketed to 52%, university grads were increasingly female, and the wage gap was quickly closing. Meanwhile, I was an impressionable 5-year-old, at home renting and re-renting Working Girl.

If you haven’t watched Working Girl on repeat, a quick synopsis: Melanie Griffith plays Tess McGill, a strappy secretary who rides the Staten Island Ferry in running shoes to the sky-high Manhattan offices. Tess is smart and ambitious, but trapped in a man’s world that ignores her good ideas. When Tess’ new boss—an idea-stealing frenemy played by Sigourney Weaver—breaks her leg, the scheming secretary makes a plan for change: a professional makeover (into her boss’ wardrobe) and a new office boyfriend played by Harrison Ford (also the boss’ boyfriend; whoops), all to land a career-making deal to smash the glass ceiling and finally lift her up the male-dominated corporate ladder.

Oscar and Golden Globe judges loved it, as did viewers. “At 18, when I saw it in theatres, I was blown away. I’d never seen a film that so appealed to me about women and success,” says Brock professor Shauna Pomerantz. But a career in feminist media studies has Pomerantz re-thinking Working Girl’s so-called feminist lessons: Which of Tess McGill’s tricks have more staying power than shoulder pads? And which better belong in 1988? To find out, we ran Working Girl—on its 25th birthday, no less—through a gauntlet of feminist gurus. Now kick off your pumps already and press play.

Will you be my mentor?: “She wants to be my mentor, which is exactly what I need!”—Melanie Griffith as Tess

Let’s start at the very beginning: Having newly quit another demeaning job, Tess gets a new boss—the seemingly kind Katharine who Tess hopes will take her under her wing. Here, my ‘80s girl Tess is miles ahead of her time: The last decade of women’s career seminars have dwelled on mentorship as a number one discussion topic, says Sheryl Sandberg in Lean In: Women, Work, and the Will to Lead. “Young women are told that if they can just find the right mentor, they will be pushed up the ladder and whisked away to the corner office,” she writes. Not so. In fact, it works the other way around: work hard and a mentor will notice you.

But since workers with mentors get better assignments and more money, it’s still an enduring fantasy—“the professional equivalent of waiting for Prince Charming,” says Sandberg—which, as Tess will learn the hard way, is rife with disappointments. Firstly, for the most obvious of sexist reasons, powerful men are reluctant to mentor young women. Harvard Business Review reports 64% of high-level men are hesitant towards one-on-one with junior women; similarly, to avoid office gossip, half of those women avoided close contact with the men.

Worse, stereotypes that your equally powered female boss is inevitably of the backstabbing Devil-Wears-Prada variety perpetuate old fears that accomplished women hog and protect limited female spots at the top. Here, says Pomerantz, is where Working Girl went way wrong. “Katharine is cast as an unfortunate enemy. A lot of anger is misplaced by pitting these women against each other instead of working together against the corporate world.” In fact, female bosses (especially mothers) can better understand and accommodate flexible hours and locales, making them a working girl’s best friend.

What to wear: “Dress like a woman, not like a man would dress if he were a woman.”—Harrison Ford as Jack

When her boss breaks a leg skiing, Tess is granted access to her boss’ posh pad and promptly gets snooping. There it is: Tess’ idea, previously rejected, stolen and presented as Katharine’s own. Now it is on—and by it, I mean war and a $6,000 dress, which Tess can “borrow” to enjoy her bitchy boss’ networking ops. Once upon the 80s, work-appropriate attire meant concealing girly curves beneath formless and manly black and grey pantsuits. For Tess McGill, that means vetoing flashy jewels and trashy tresses. “If you want to be taken seriously, you need serious hair,” she says, reaching for the scissors.

This isn’t nearly enough for Susan Faludi, whose 1991 Pulitzer Prize-winning book Backlash took aim directly at Working Girl. To Faludi, Tess is an “aspiring secretary with a child’s voice” who “buries her intelligence under a baby-doll exterior.” Films like this one, she said, represent a “backlash era” to counteract female gain.

But in 2013, when Yahoo CEO Marissa Mayer reclines in Michael Kors in Vogue, a little feminine flare is more than tolerated, it’s an asset. “There is nothing more mind-numbingly boring than a matching jacket and skirt,” says Kate White, former Cosmo editor-in-chief and author of I Shouldn’t be Telling You This. By all means dress like a woman, and unlike Tess, there’s no need to tone it down and blend in: “If you look fantastic and fashion forward, you’ll feel more confident and people will notice and remember you.” Using the gender spectrum to your advantage is perfectly acceptable, but you still need serious hair. “You should have a cut that says you mean business,” says White.

I do?: “Will you marry me or what?”—Alec Baldwin as Mick

The same day we learn Tess’ boss is a thief, turns out her boyfriend’s a cheat—caught in action with another woman. Just days after that, at Tess’ best friend’s engagement party and in front of all their friends, he curve-balls Tess with this most unromantic of impromptu marriage proposals: “Will you marry me or what?”

Don’t do it, Tess, because in 1988 and 2013 alike your choice of partner is imperative: “The most important career decision you’re going to make is whether or not you have a life partner and who that partner is,” said Sandberg in her Barnard commencement address. Lean In is dedicated to her husband for “making everything possible.”

For Sandberg, the modern gal’s dream of “having it all”—that is, a job and a family and a fulfilling personal life—hinges on hooking up instead with the Harrison Fords of this world. Or not, argues Princeton politics professor Anne-Marie Slaughter. “Having a supportive mate may well be a necessary condition if women are to have it all, but it is not sufficient,” she wrote in a 2012 Atlantic essay after leaving her gig at the US State Department. A 2007 study found 60% of educated women who left the workforce cited their husbands’ lax domestic habits as a critical factor in tapping out. Work-life balance, says Slaughter, is “more elusive for women than it is for men.” Even in 2013, women are still performing the lion’s share of housework during the dreaded second shift. But it can’t hurt to lean into the direction of a man who cooks.

Business and Pleasure: “I have a head for business and a bod for sin. Is there anything wrong with that?”—Melanie Griffith as Tess

Bye, Baldwin and hello, Harrison! With old ties cut and a handsome co-worker helping with Tess’ merging deal, she faces an old quandary that won’t die: Can we merge too? In 1988, the answer was a firm No. “We’re doing a business deal together,” says Tess, despite passing out in her underpants in front of him the night before, “I don’t think we should get involved that way.”

Obviously, they still do, and 25 years ago, Susan Faludi wasn’t loving it one bit: “[Tess] succeeds in business only by…relying on far more powerful businessmen to make the key moves in her ‘career’,” she writes. Modern feminists, however, are more forgiving. “They do need each other, but they also make a great team,” says Pomerantz.

So in today’s workplace, and for the right guy, obviously you should consider merging. Info bank PayScale’s 2013 Office Romance Report found 15% of workers are willing to date at work. This number may seem low, but know those relationships—the ones worth risking your pay cheque for—have disproportionately high success rates: One in five work so well they lead to marriage. “Dating people at work can be great, and so much better than meeting someone at a bar, but you have to not kid yourself,” says White. Post-millennial etiquette demands you know your workplace policy and associated risk, don’t sleep with your supervisor, and don’t do anything to draw attention to your relationship at work. Celebrating your successes via public make-out, it seems, is only for the movies.

Think Big: “Sometimes I sing and dance around the house in my underwear. Doesn’t make me Madonna, never will.”—Joan Cusack as Cyn

Tess is looking good and getting things done, but how long can she really fake the funk? Not long, says Tess’ concerned best friend, played by a loud-mouthed and high-haired Joan Cusack. Her nugget of retro advice is a warning against a common modern adage: “Fake it till you make it.” Luckily, for all upwardly mobile young women, Tess’ BFF was and is very, very wrong.

Imagine you’re Marissa Mayer, then the only female on Google’s engineering team, asked at every corner how it felt to be the odd woman out. If at all weird, Mayer admitted nothing, telling Vogue that she hadn’t even noticed. (Not exactly a lie of Tess’ proportions, but we like her sassy ‘tude all the same.) The strategy works: One study found a simple change in posture—two minutes of standing tall and spreading your limbs—had actual and immediate hormonal results: testosterone, the dominance hormone, raised; stress hormone cortisol, meanwhile, plummeted. In other words, even if you’re faking the funk, your results are very real. “Feeling confident—or pretending that you feel confident—is necessary to reach for opportunities,” says Sandberg. So by all means, wear a new outfit and sweet talk the doorman, cause faking it till you’re making it shouldn’t be a film-worthy one-off. It should be your regularly scheduled programming.

Take breaks as necessary: “Wise up and don’t take the whole thing too seriously.”—Melanie Griffith as Tess

It’s a bummer third act for Tess: Her boss is back and promptly discovers Tess’ schemes, storming into the almost-done deal just in time to ruin everything. “This woman is my secretary,” announces Katharine, as Tess leaves in embarrassed tears. She’s now fired, exposed, and single at her BFF’s wedding in a very unfortunate 80s ensemble. Life is the fast lane, says Tess sadly, is “well, um, real fast” and, for the record, in the quaint technical times of 1988, she didn’t even own a cell phone.

“Setbacks and disappointments are information-gathering experiences,” says Kate White, “and the more you can use them the better off you’ll be.” Re-jig and get back in there, but if your heart’s not in the go-go-go decade of excess anymore, in today’s feminist landscape it’s perfectly girl-power to choose a different and more personalized route. Today’s workplace may swiftly follow our lead: “Slowly, change is happening,” writes Slaughter optimistically in the Atlantic. “Some firms are finding out that women’s ways of working may just be better ways of working.”

Which is just how this story ends: Tess’ unique ceiling-smashing behavior is finally acknowledged and rewarded with a new and better job—with her own secretary!—where she’s free to make her own rules. But do take the business of rule-breaking seriously, especially in 2013. “Sometimes we’re living like we have equality, like we don’t need to fight anymore,” says Pomerantz. We do. In this post-feminist landscape, she adds, “the film may be more relevant than ever.”

Something to ponder while Carly Simon sings and credit roll. 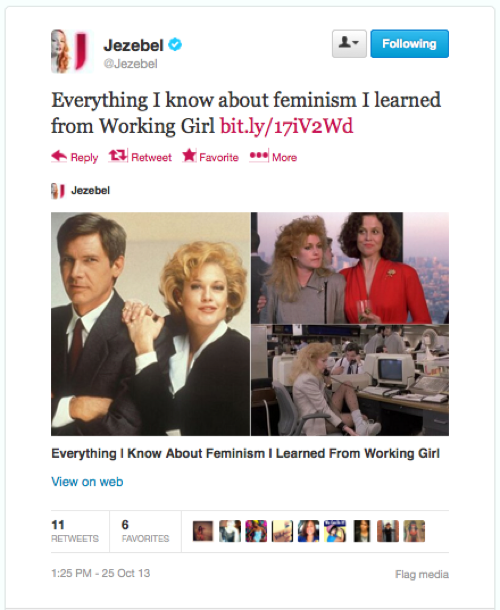