Why Facebook-induced jealousy can lead to lying and spying!

I’ll admit it: Sometimes I creep. But, really, who doesn’t? We all know that an undetected lurk of an ex or a frenemy is just one of Facebook’s more addictive features. But as I spied on my old boyfriend from behind the virtual curtain, checking out smiling shots of him cheek to cheek with his new squeeze, refreshing and re-refreshing the page as necessary, I harboured some seriously uncharitable thoughts. All very clever and insightful too: “Ugh, I hate her!”

Pretty vicious, I know, but I’m hardly alone here. Last July, an Oxygen Media study found that 49 percent of young female Facebookers believe it’s fine to spy on boyfriends, and 58 percent use Facebook to keep tabs on frenemies. Even the movie tag line for The Social Network—“You don’t get to 500 million friends without having a few enemies”—says what avid lurkers already know: Facebook can be a battleground for jealousy and obsession. Whether we inflict it or it’s inflicted upon us, here’s how to deal with Facebook’s green-eyed monster.

THE ATTACK: Your boyfriend’s “friend” is altogether too friendly.

Jen, a 20-year-old social-work student, admits that she has no reason to mistrust her boyfriend. While he’s away at university, girls often hit on him, but he always discloses his girlfriend back home. (Just to be sure, Jen checks his texts.) “I’m already a very jealous person,” she admits, “but Facebook makes it much worse.”

Or better, depending on how you look at it. The second most visited site on the Internet—lagging only behind Google—is a limitless, consequence-free network that’s perfect for e-stalkers, and Facebook wouldn’t have it any other way: In 2007, an application called Trakzor—which is exactly what it sounds—had users panicking. After countless complaints that privacy—and perhaps dignity—was at stake, Facebook released a statement assuring its members that tracking was technically impossible.
But this September, they made creeping easier again with a new “subscribe to” feature—dubbed the “Stalker Button”—that sends notifications of your friends’ (or frenemies’) every Facebook move.

But zealous lurkers should still be careful, warns Amy Muise, a psychology Ph.D. student at the University of Guelph. Her 2009 study, More Information Than You Ever Wanted: Does Facebook Bring Out the Green-Eyed Monster of Jealousy?, found that the more time you spend on Facebook, the more likely you will experience jealousy. “Creeping makes it very easy to access information,” says Muise, “but it lacks context.” That means, even if it’s perfectly innocent, a simple post like “Great seeing you last night” can get a gal into a frenzy.

For Jen, it was one particular girl’s incessant use of the words “babe” and “XOXOs.” She’s not an ex— though over 80 percent of us keep former sexual partners as friends, says Muise—but supposedly just a close friend who is prone to being a tad lovey-dovey. Jen’s boyfriend considers her posts just fine, but Jen, with the opposition always in sight, is more “Who is this bitch?”

“If you’re already prone to jealousy, you’ll probably experience it in most contexts,” says Muise. But jealousy levels aren’t finite, and there’s a vicious circle at work here: “You look, you get jealous, you look even more.” After months of weekly creepings (“She’s so thin and pretty,” says Jen, who describes herself as “regular”), Jen met her in the flesh at a party. Surprise, surprise: The other woman turned out to be regular too, and they hit it off. Though she never fessed up to the jealousy nor curbed her jealous habits, they became fast friends on Facebook and in real life. Ironically, she says, “My boyfriend’s jealous of us now.”

THE ATTACK You are the object of jealousy—and rightfully so.

Though all his friends are Facebook users, George, a 24-year-old med student, has boycotted the social network. “I feel like it’s an invasion of my privacy,” he explains. But even he isn’t safe. When George told his on-again, off-again girlfriend (a “big-time Facebook user”) that he was “spending time with family” on the weekend, she believed him—until pictures of his late-night shenanigans popped up on a mutual friend’s wall. Two and a half billion photos are added to Facebook each month, but it took just one of George with girls on each arm (and “very drunk”) to safely say that George and his jealous girlfriend were off-again for good.

“Facebook merges your online and offline lives,” explains Muise. Be very aware that, whether you’re on Facebook or not, the pictures you pose for in real life—especially the unflattering ones—often don’t end up in old-fashioned albums these days. It’s just as our parents feared: A posted picture is forever, ripe to emerge just as your political campaign kicks off. Anything sensational is even worse, and Facebook ousts are now a popular staple of the cultural zeitgeist. A Cleveland woman recently discovered her husband’s other wife—on Facebook. A Toronto woman faked cancer and ran a bogus charity— through Facebook. Both stories are made better by ample photo evidence, courtesy of Facebook.

But back to us regular, less devious folk. George vowed not to lie anymore but still asks his paparazzi pals to go easy on the pics. He has also learned that a context-less picture can be a landmine for female friends. “Women are more acutely aware about what posted information says about them to other people,” says Muise.

THE ATTACK All your friends are “in a relationship” and you’re not.

“Every time I saw ‘single’ listed on my Facebook, I was depressed,” says Faith, a 27-year-old working in the not-for-profit sector. Tired of one too many spam emails from singles sites and sick of being jealous of her hitched friends, Faith got creative.

Copying and pasting a few vague pictures off Google, Faith created her perfect guy: “Derek” is handsome, likes animals, holds a steady job and plays in a rock band. As such, Derek is pretty popular: He gets party invites and birthday wishes from more than 200 friends (70 more than the Facebook average). He is chatty with her friends and often asks which fruit she would like on her morning pancakes. If anyone’s curious, Faith says she met him online.

Unfortunately, he’s not real. Though Faith’s close friends are in on the joke, her frenemies—the ones she wants to envy her—don’t know, nor do a slew of jealous suitors. “As soon as I was in a relationship, all these guys came out of the woodwork,” she says. If any of Derek’s rivals work out, I ask, won’t she have to break up with him? “Yes,” Faith says, “but I don’t think he’ll mind.”

“Some studies suggest that being in a relationship is more important to female identity,” says Muise. And it doesn’t stop at your status; the men in Muise’s study told her that their girlfriends wanted them to post pictures and messages on their Facebook page about their relationship more than the men wanted to. For those in relationships, electronic attention given elsewhere can be akin to emotional cheating, which scientists have proven (though women have long known) to be more upsetting than sexual infidelity.

It could well be that Facebook compounds the pain of emotional betrayal with the humiliation of a public forum, so it’s no wonder that women develop tactics to protect themselves. Muise’s next study will do just that: She will explore how men and women react when they feel jealous in response to something on Facebook.

Ironically, says David Kirkpatrick, author of The Facebook Effect, the more you maliciously “use” Facebook, the less use you will get from it. “If you invent a persona or too greatly enhance the way you present yourself,” he writes, “you will get little benefit from Facebook.” So, if your social networking feels more like social espionage, it might be time for a technological truce—with yourself.

Which is exactly what I did. It’s nothing too crazy—though I hear blockyourex.com is now up and running; I just exercised restraint. A few post-free years have passed, my jealousy has dissolved and (periodic) visits to the ex’s page reveal that he and his girlfriend eventually broke up of their own accord. I have a new boyfriend now anyway, and, of course, he gets his own share of flirty posts. But I don’t dwell on it, keep my screen refreshes to a minimum and try not to get too jealous. 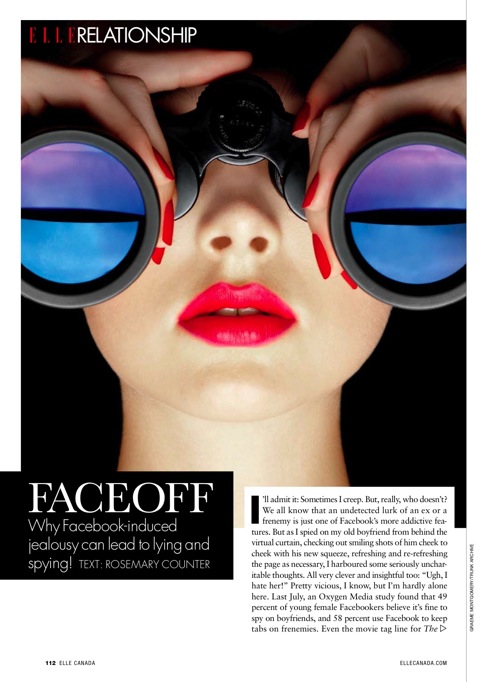 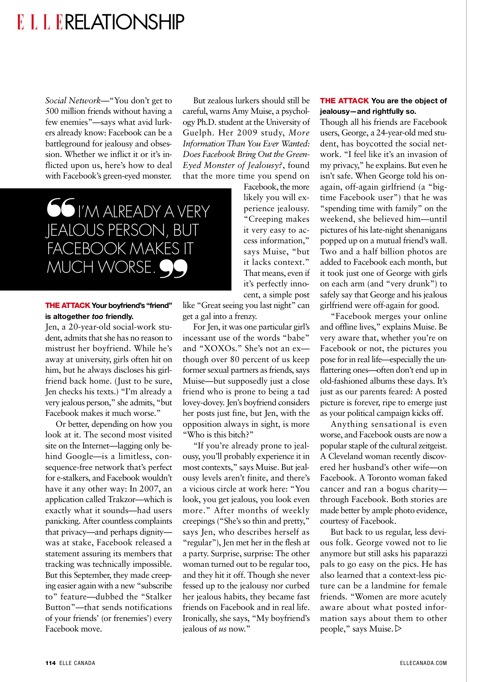 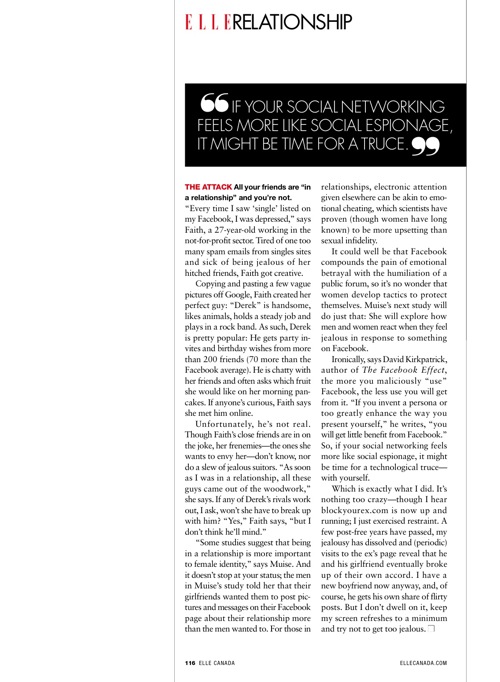