Social-media influencers are so hot right now. How to use them well

Recall the good old days of 2007: Twitter had just launched, Facebook was for keeping up to date with your friends from university and there was no such thing as Instagram. It was a simpler time, when the word “influencer” meant something very different than today. “Everything was organic, old-school, printed posters and handouts,” says Sarah Greco, chief marketing ofﬁcer at the Ten Spot (2018 Growth 500: No. 425), a Toronto-headquartered national chain of beauty bars that started operations the year before. And then, a shift: “Suddenly people would reach out and say, ‘Here’s my blog, can you give me a free service?’”

Initially, the Ten Spot would usually say “yes.” The arrangement—basically, to offer a mani-pedi in exchange for a social media post—was in some ways very old-fashioned; after all, companies have comped products and services to spokespeople to spawn word-of-mouth buzz for decades. But in other ways, the explosion of social media over the past decade has opened an entirely new landscape, one that has seriously democratized the traditional ad business. Now, with a bit of effort, anyone with a yen for self-promotion can build a substantial audience and a valid career as a social-media infuencer, creating new collaboration opportunities for businesses big and small. “I don’t think any company should ignore influencer marketing,” says Erin Bury, who, as managing director at Eighty-Eight Agency in Toronto, closely follows marketing trends for a living. “It’s a new, improved, online version of word-of-mouth—one that goes much further.”

Getting influencers talking about your product or service, however, isn’t as easy as throwing them some swag and hoping for the best. So when @JoeBlow reaches out offering up his followers for a #spons #ad, should you ship him some freebies? What about a fat cheque? And in a business fraught with charlatans, big talkers and fake followers, when should you tell Joe to get lost? Many companies on the 2018 Growth 500 ranking of Canada’s Fastest-Growing Companies have ﬁgured out how to navigate this uncharted territory, and they have plenty of advice about doing influencer marketing right.

For the uninitiated, here’s a quick who’s-who of influencers: Mega influencers are people with more than a million followers who charge top dollar for promotion (think Kardashians). Macro influencers have more than 10,000 followers, a clear brand that attracts a certain demo, and far reach. Then there’s micro influencers, people with 500 to 10,000 followers that they know far more personally. Finally, there are nano influencers, who can have as few as 50 followers, but whose authentic personae and genuine fandom shines through. Bigger is not always better: an Instagram post put up by a nano influencer might have a higher engagement rate (the percentage of the audience who actively responds—two per cent is considered good) than Kimye’s latest plug.

That engagement rate is what Greco looks for at the Ten Spot. For example, to help get the word out about a new Halifax location, the company chose to partner with a a local influencer with a modest follower count but a high engagement rate instead of a flashy celeb. That influencer was given both a service for herself and as a giveaway for her followers—a targeted, credible way to build buzz in a new market.

Before you even consider letting someone rep your brand as a social influencer, carve out time to study them properly. “I will absolutely look at everyone’s page and proﬁles, but also their followers,” explains Greco. First and foremost, she checks to make sure they are humans, not bots. Then she looks closer: “How many are local? Canadian? How many are potential guests?”

Getting and staying in the know is an enormous, never-ending task; in fact, experts estimate that for a single campaign, research alone can cost tens of thousands of dollars in direct and indirect costs. If you’d rather not spend your days creeping strangers’ social feeds, you can outsource it. Services like Hashtagpaid.com and Tagger, a recently launched influencer marketing platform created by Toronto-based ad agency Cue Digital Media (2018 Growth 500: No. 455), are built to quickly and easily link brands with better-ﬁtting influencers. “It does all the research for you,” explains Cue CEO David U.K. “We don’t just want to know numbers; we want to know followers’ demographics, habits, where they spend their money and time.” If your budget allows it, you can save hours upon hours of research with just a few clicks.

Ask Ian Ritchie from Greenbelt Microgreens (No. 123) for free samples of his nutrient-dense produce and, after sufﬁcient research making sure you ﬁt the brand, he’ll probably spoil you. “I have no problem giving [influencers] free stuff,” he says. Come to his greenhouse in Lynden, Ont., in fact, and he’ll personally give you a full tour, chock full of Insta-moments. “There’s only a small cost to this and hopefully a snowball effect that builds momentum,” he says.

If you can easily accommodate requests for freebies and comps, the consensus is that you should—a widely cast net can help snag superfans with whom you can secure longer-term relationships.

Of course, it’s a more complicated decision when influencers start asking for money in addition to gratis goods—especially since even micro-influencers are now asking for ﬁve-ﬁgure rates to put up a single #spons post. That’s when a write-off becomes a transaction—and it should be treated as such. Bury says to keep an open mind: “If an influencer tells you their rate, don’t write back and tell them it’s ridiculous,” says Bury. “This is their job. Respect how they make their living.” If the audience is right and the proﬁle is deemed adequate, she says, the ampliﬁcation is worth paying for.

Since social-media influencing is still new, there are few set rules, and miscommunication is common. Consider a widely-circulated recent feature in The Atlantic, which detailed the angst of hoteliers facing an influx of freebie asks from would-be social stars. In one case, a hotel comped a luxe room, expecting posts about the property; instead, it got a dozen bikini shots of the influencer on its (generic, unrecognizable) beach.

It’s important to set expectations—ideally, in a written contract. And it is also key to remember you’re running a business, not a charity; the goal of all influencer marketing should be to boost brand awareness and, ideally, translate that to sales. At the Ten Spot, Greco explains, “the objective is conversion.” Inundated with requests from influencers for freebies, the ﬁrm crunched some numbers, identiﬁed the hard costs associated with comped services and added those numbers to its budget. The exercise prompted Greco to rake back the number of handouts—free services now represent less than 10 per cent of the marketing budget.

It’s never easy to say “no” to requests, but the consensus is that quality is much better than quantity: “You could spend a ton of time working with a hundred influencers,” says Ritchie, “but I focus on the few that are the most productive.”

And now the Golden Rule of influencer marketing: keep it real. “Some people portray a very different persona online than in real life,” explains Debbie Fung, co-founder of Yoga Tree Studios (No. 418), which operates ﬁtness facilities in the Greater Toronto Area. Fung wants any influencer linked to her studios aligned with the healthy yoga lifestyle her brand promises, so she always meets influencers in the flesh to make sure they are who they say they are. “I need to know if their core values, online and off, match ours.”

“We’ve all seen examples of gratuitous paid partnerships that don’t align,” says Rachel Mielke, CEO of Hillberg & Berk (No. 104), a Regina-based designer and retailer of jewellery. Customers are smart, and if an influencer’s post rubs them the wrong way—maybe it reads like an ad, or doesn’t ﬁt the persona cultivated by the person posting—they’ll quickly reject both plugger and product. For Hillberg & Berk, a business premised on female empowerment, Mielke seeks out “authentic, long-term partnerships with people that align with our brand’s values.” It’s certainly not the easiest way to market, but when you are able to forge what Mielke calls “genuine connections”—the results can be truly #blessed. 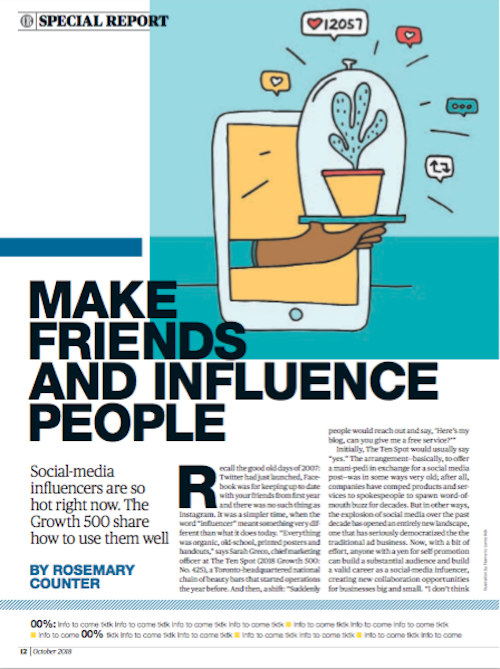 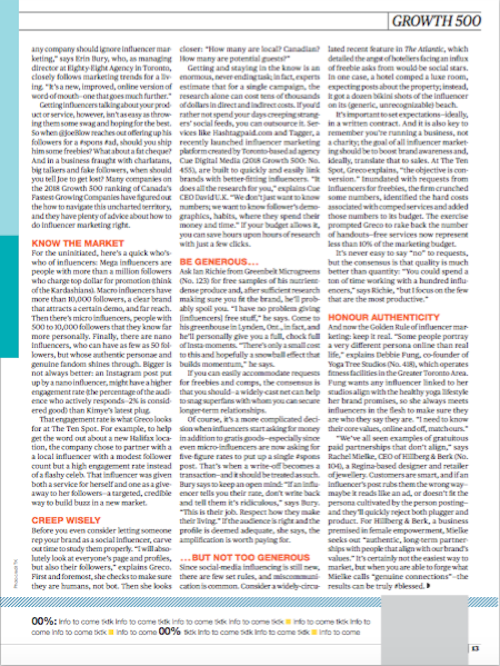