Adoring your man too much on Facebook? Lubby dubby tweets from your couple friends annoying?

I have a problem. My boyfriend—whom I’ve been with for five happy years, including four years of cohabitation and, as of last fall, property ownership—wants to be “in a relationship”. On Facebook. And I’m not sure I’m ready.

I joke to cut the tension. “I’m just that kind of girl,” I say. But really, it’s more than that. It’s my personal decision that our relationship status should be no one’s business but ours. And, more importantly, I worry that if were ever to break up (knock on wood), the last think I’d need is a broken heart—emoticon or otherwise—broadcast to the newsfeeds of everyone I’ve every known.

Others don’t seem to suffer from this affliction—not by a long shot. Two recent examples of shamelessly saccharine status updates: “For the record, I have the best husband. Ever.” and “2 year anniversary @ our fave, The Keg! Time flies by! So in love.”

As all the world’s “best” husbands and “luckiest” wives vie for official public designation, nervous knots grow in my stomach. Am I the only one?

Ashley, a 30-year-old teacher from Toronto, began her relationship with her husband with ample e-affection. She drops the L-bomb online every week and has posted hundreds (yes, hundreds) of photos of her wedding. Sharing “almost everything about the most exciting time in our life together,” she explains, in an unapologetic no-brainer. “I’m like this online and in person, I wear my heart on my sleeve.”

Sweet, I’ll admit, but is it wise? Is the inclination to constantly advertise your love—with all the details of just how lovely your love is—a self-fulfilling prophecy or establishing an impossible standard?

While the answer to that question is unknown, new research from Cornell University does provide insight into the impact of social media on romantic relationships. The study looked at 1.3 million Facebook users and found that a couple’s mutual friends could provide clues about how their relationship will unfold. According to computer and study author Jon Kleinberg, it comes down to dispersion, which is the degree to which your mutual friends aren’t connected at all.

“In a social network, you can often recognize two people in a relationship because their mutual friends are highly diverse, from different social circles rather than just one [group],” says Kleinberg. Couples who have mainly mutual friends from one group, he noted, were 50 per cent more likely to break up. As it turns out, you could have too much in common after all.

Amping up the pressure to be couple-y online, Facebook introduced the just-for-us “Us” page in 2012. This year, the popularity of Bitstrips, an app that generates custom comic strips starring you and your friends, provided a perfect forum for endless adorable couple details: Julie makes lunches for Drew. Julie plants one on Drew. Julie and Drew are in love!

Ashley’s husband, however, is more private and conservative. In fact, he’s hardly even online. “He doesn’t use Facebook nearly as much as I do,” she admits. So what’s the point of firing off her affirmations of love into cyberspace? “I see it as a way to show the world how proud I am to be married to such a wonderful man.”

Mundane as status updates themselves may seem, disputes about social media activity—or lack thereof—are very common (and on the rise) among couples says Calgary relationship mediator Debra Maclead. Citing jealous, insecurity and infidelity as potential repercussions, she says the effect of social media on relationships isn’t all good. “For the most part, while it’s great for keeping up with family and friends, social media is horrible and highly destructive to relationships.”

But since most of us won’t be logging out anytime soon, Macleod believes it’s important that your relationship—mushy or not—be honestly disclosed. “I would definitely insist on a status,” says Macleod.

Disclosing, at least to me, is very different than advertising. And, of course, e-chatting with your significant other isn’t just normal—it’s damn convenient. “It’s only natural that couples interact on Facebook, Twitter and the like,” says Sofi Papamarko, of Toronto dating service and website Friend of a Friend Matchmaking. “But we’re all subjected to these communications. That’s why it’s called social media.”

For Papamarko, who is as savvy with social media as she is with set-ups, it’s quality over quantity. Birthdays and other milestones—yes, please. Inside jokes or what to make for dinner tonight—no, thanks. “Those details can be pretty boring to people who aren’t part of your super-exclusive club of two,” she acknowledges.

When the rest of us social media users get irked, cue the inevitable Internet (and real-life) backlash. Ashley isn’t blind to this. She’s felt criticized by cynics, but she doesn’t care. “I’m very comfortable in my own skin and my friends accept me for who I am,” she says. “If anyone dislikes it, they don’t need to be in my life.”

Luckily for her, it couldn’t be easier to disconnect from someone online. “If you don’t like another person’s XOs and luv-yas, one lick is all that’s needed to unfollow them. For this reason, lovebirds should feel free to Tweet away, says Vancouver social media consultant Monica Hamburg. “Your normal is always somebody else’s weird,” she says. “Ultimately, if you’re fine with your shmoopiness and are comfortable being connected in a public way, let people hide your messages. That’s their choice.”

The bottom line though, is that however connected you are (or aren’t) online shouldn’t matte if you’re sufficiently connected in real life. “I worry that we lost something when we decided that we should be online as much as possible,” says Hamburg. She’s a big proponent of signing out—at least for a bit. “It’s really nice to get out of the public realm. Sometimes it’s nice to not feel like you’re talking to an audience.”

And if you’re like my Facebook friends, you may be interested to know I took a baby e-step and finally changed my status. I’m now “In a relationship”–though to know what kind and with whom, you’d have to ask me or dig way deeper. Or just check my Instagram, where snapshots of flower bouquets speak for themselves.

A little bit of both, I must admit. But I don’t feel any schmoopy shame at all. 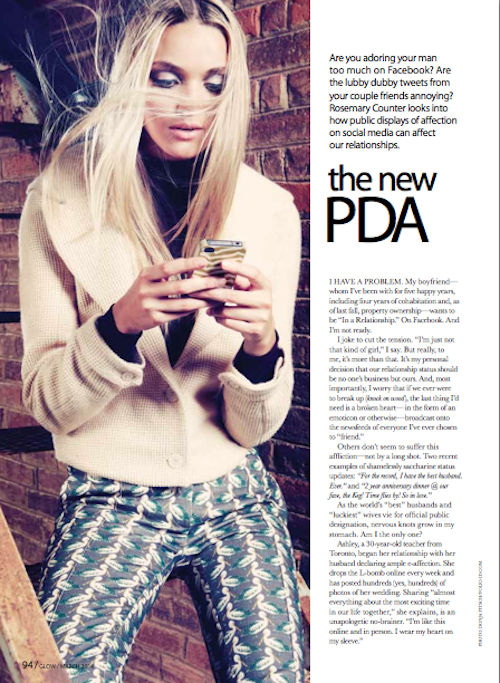 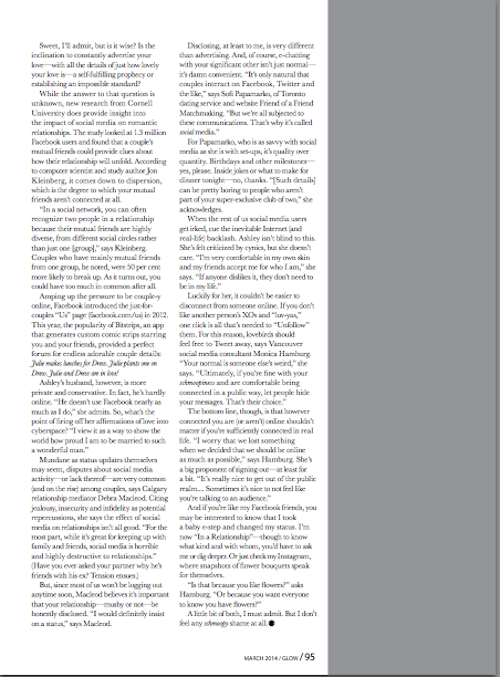