From mo’s to toes, some women like their men a little wild and woolly

“There aren’t many chicks who want to make out with a man who looks like Hulk Hogan or Chewbacca,” she wrote, and — with the exception of Hulk and the video that proves it — she’s right. Lots of women find male hair gross, stinky or scary.

Then, sometime when I wasn’t looking, it grew on me. Stubble? Sexy. Chest hair? Let me touch it. The rest? It makes me feel less hairy, and I like that. It keeps him a toasty temperature for ideal winter snuggles. Rubbing up against it like a cat on a scratching post feels good.
Lots of women agree with me, so furry fellows out there should relax and let their hair down.

For Carey, a 29-year-old from Calgary, “body hair is just not a make or break.” Her man — “pretty hairy, except on his head” — waxes his back, but not at her request. “It’s not natural, and natural beauty is one of the most beautiful things,” says Carey.

Other ladies aren’t just indifferent, they love scruff. Ever since Toronto’s Antonella, 29, had a Ryan Gosling-based “aha moment,” she’s loved everything about facial hair. “Men look better with beards, it’s that simple,” she says. “I urge all my reluctant friends and boyfriends to grow facial hair.”

But this is all anecdotal and we mustache mavens are rare. Stats often —but not always — find clean-shaven is the Jersey Shore look de jour. Body hair on both sexes is currently out of vogue, hence the multibillion dollar industry of lasers, trendy sugar waxes and whatever that No! No! gadget is.

Maybe it’s just me, but a couples’ waxing date is the opposite of sexy.

The flip side of fashion, however, is that it’s always changing. Similar studies from the 1970s found women were most attracted to light beards (in bell bottoms, I assume). Ditto for 2008 findings that found Brad Pitt’s trendy stubble (masculine but not too masculine, beard potential evident) to be the new fave. And as usual, context is key: Askmen.com found 76% of women love chest hair.

Though Zoosk.com found 22% of women think moustaches look awful, they also found 21% think they’re sexy, but most important, 63% appreciate
their dudes showing support for a good cause.

And come Dec. 1, three-quarters of men will either keep growing or shave it all off, depending on what their lady likes best. A very good plan, and I think all the ladies can agree on that. 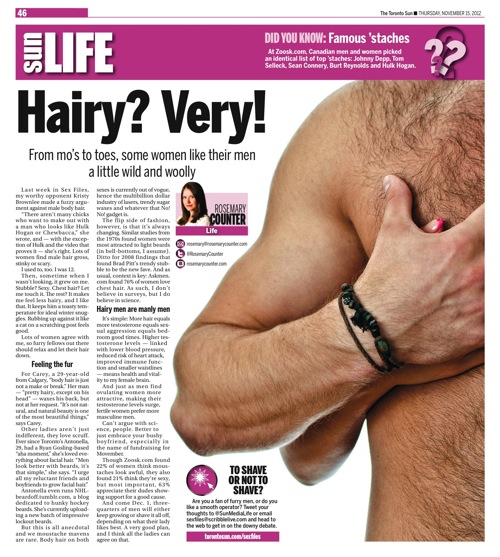