How to be famous, by anonymous

“Allow me to begin by thanking you for the invitation to join you and your readers,” author Sylvain Reynard writes in an email. This is not quite true. “S.R.,” as he is known (but never seen) around his publisher’s office, had his people reach out. Penguin Canada offered an interview with the curious, anonymous author, and only via email. The catch: they know nothing about him.

Here’s what we do know: last year Twilight fan fiction called The University of Edward Masen by Sebastien Robichaud popped up online. This S.R. has since disappeared from the web. The story reappeared as an ebook from Dallas-based Omnific Publishing called Gabriel’s Inferno by Sylvain Reynard.

Like Twilight and Fifty Shades of Grey, Reynard’s novel features a love triangle between a too-pale, too-thin virgin, the kind boy-next-door she should date and the cold and dam¬aged older man who dominates her. “I have a bad temper,” warns Reynard’s main character, professor Gabriel Emerson, “and when I lose my temper I can be very destructive.”

Reynard, however, adds literary sophistication. Inspired by Dante and his muse Beatrice, Reynard invented a dark scholar who seduces his innocent grad student. He set the whole thing at the University of Toronto.

“The journey of the book is almost as interesting as Dante’s journey through The Divine Comedy,” says Reynard. With the help of a supportive online book community—“E.L. James is a friend of mine,” he confides—it landed on the New York Times ebook best¬seller list. After that, Berkley Books, an imprint of Penguin Group (USA), scooped up print rights in a seven-figure, two-book deal. One million copies hit stores this week.

For publishing folks, this is all very suspicious. The book is good, almost too good, and the deal disproportionately large. Rumours began swirling: did all of the above really happen? Could S.R. be an established author? A University of Toronto professor, perhaps? And, since the books are set in Toronto, could he be hiding out there?

“I am Sylvain Reynard and I am Canadian,” he writes. He laughs off being dubbed the “Canadian Fifty Shades,” imagining “characters in heavy winter clothing, drinking domestic beer while listening to CBC Radio.” His pen name—“Sylvain” is from the Latin for woodland, “renard” is French for fox—is Canadiana at its best. He’s an avid sup¬porter of the Yonge Street Mission, and his favourite Toronto neighbourhood is the Annex.

“Have you ever won the Charles Taylor Prize?” he is asked. “No comment,” he writes.

“Should we look for a Canadian author mysteriously absent from publishing for the last few years?” “I can’t answer that,” he says.

Reynard self-identifies as male, and he’s chummy, almost flirtatious, with female Twitter followers. He sips single-malt scotch, preferring the pricey Laphroaig. But gossip lingers that he’s a woman, sparked by one website’s accidental pronoun slip and the stereotype that men can’t write erotica.

Michael Redhill published two mystery novels as Inger Ash Wolfe before unmasking himself in July as A Door in the River hit bookstores because his anonymous female writer “needed some¬one to speak for her.” He describes it as “an almost existential experiment” that was “fascinating while it lasted, but this is about books and publishing.”

Reynard says he has no desire to be a public figure, assuming he isn’t one already. “I can walk into major bookstores and inspect the displays of my novels then disappear into the crowd.” If the book lives up to its hype, Reynard’s secret will prove harder to keep. In the meantime, the woodland fox is enjoying the best of both worlds. “A short time ago, I might have thought that being anonymous would have prevented be from being interviewed by Maclean’s, and yet here I am.” 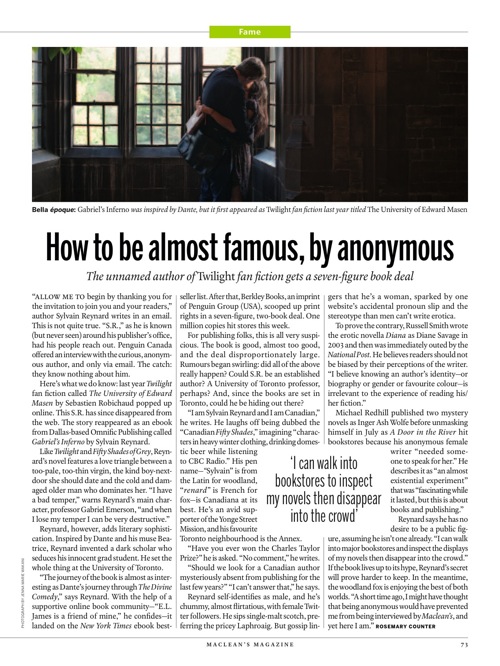