Do you Google a blind date before the big night? Of course. Keep a keen eye on your better half’s social media habits? Probably. Sneak a peek at your partner’s phone when they left the room? Uh, no comment. But have you listened to their voicemail?

As most of us shake our heads in judgmental disgust, a full 36% of adults aged 18-24 — according to a survey of 2,000 adults for dating site Ourtime.com — are willing to ‘fess up. If bad behaviour is suspected, they said, electronic spying is just fine.

One such admitted snooper is a 29-year-old I’ll call Clara, who both googles her new dates and seriously snoops “any boyfriend who I like enough that they could hurt me,” she says. Since a snoop mission three years ago revealed infidelity, Clara’s been all snoop, all the time.

“My strategy is to pray that he leaves his Facebook logged in. I feel thrills of joy when that happens,” says Clara. She feels no guilt at all.

It gets worse: “One of my exes used the same code for his card and voicemail, so once I cracked that I could see restaurant bills on nights he was supposedly home,” she says. “Voicemails after a big fight or long weekend were always especially incriminating.”

Her best sting? A faux Facebook page — complete with hot photos and ongoing activity — lured an unsuspecting boyfriend out for dinner. “When he got to the restaurant, guess who was sitting at the table? The look of shock and horror on his face was all worth it,” she laughs.

We all love a good revenge tale, but has Clara gone too far? Christine Hart, dating expert at Your Date Coach in Toronto, says yes. The fact that a third of us cannot trust our partners, says Hart, is “beyond surprising, and kinda sad.” A pre-date google is recommended for safety reasons, and a one-time snoop is probably forgivable — “we’re only human,” she says — but regular snoopers are only hurting themselves.

“If you’re a naturally jealous person, you’re looking for that charge,” says Hart. “And sometimes if you’re mad anyways, you’ll look for things.”

And here’s the kicker: unless your partner is perfect, if you look hard enough, count on finding a suspicious emoticon or a tone you don’t like. In this way, snooping is the ultimate no-win situation. “Either it’s all in your head and you can’t trust people, or this person is actually cheating on you.

“But whether you find something or not, what really hurts is when your partner learns you’ve been into their phone. It’s a huge blow to the trust, and how you re-built post-snoop is very difficult,” she adds.

So save yourself the extra drama, suggests Hart, and go cold turkey if you can on snooping. Own your crazy and confront a would-be cheater to their face, old-school style. “If you can’t have a face-to-face conversation about it, your relationship isn’t going anywhere— whether you snoop or not.” 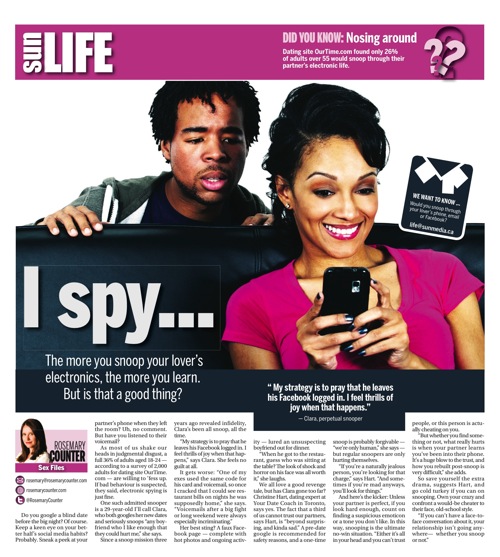