In praise of resiliency

In this era of parenting, are we letting our kids fall down enough?

One wobbly step at a time, my one-year-old is learning to walk. Right behind her, hovering nervously lest she slip or topple over (or, you know, a bird of prey sweeps down to snatch her), I am learning to relax and let her go, so she actually has room to practise and improve. The metaphor isn’t lost on me. “Learning to walk is one of the best examples of what parents should do throughout their kid’s entire childhood,” says developmental psychologist Dona Matthews, who advises the last thing I want to hear as a non-negotiable: “You need to let her fall. The falling-and-picking-yourself-up process is critical; otherwise you don’t learn.”

In Matthews’ world, this process is called resiliency, and it’s gaining tons of traction, legitimacy and attention in the parenting space. “Resiliency is the idea that the child can withstand stress when bad things happen,” explains Dr. Michael Ungar, director at the Resilience Research Centre at Dalhousie University. This might sound almost too obvious, but in practise, parents aren’t doing so well: A new study from the University of Minnesota found helicopter parenting—the nervous, hands-on, over-protective parenting we’re prone to in unpredictable times like ours—actually negatively affects kids, potentially making them less able to regulate their emotions and behaviour, more likely to act out and less able to deal with the challenges of growing up. In short, they lack resiliency. The good news is that building resiliency means I actually get to parent a little less (or at least a little more passively). Ungar lovingly calls this “benign neglect” and— besides pouring a cup of coffee and putting my feet up instead of chasing my soon-to-be walker around—there are many moments of so-called bad parenting that are actually examples of good parenting. To give your kids a resiliency headstart, which may also have a side benefit of turning out more relaxed moms and dads, skip these dos and try these don’ts.

DON’T SHOWER THEM WITH ENDLESS PRAISE

Of course your kid is the smartest, sweetest, most beautiful on the planet, but do yourself a favour and don’t tell them so every damn minute of the day. “Tell a kid that they are oh-so-smart all the time and watch what happens in a moment that they’re not-so-smart,” says Matthews. “‘Smart’ becomes their identify, and to look smart all the time they start avoiding challenges where they might not be as smart.” Ditto for cuteness and athleticism— both innate qualities that they didn’t earn and can’t change, so constantly highlighting them ultimately undermines their resiliency. Not that all positive encouragement is off the table, of course: “Instead, you want to praise things they can control—a skill, an effort, something that with intention they can improve,” says Matthews. The more specific, the better.

DO TAKE YOUR EYES OFF THEM (YES, EVEN FOR ONE MINUTE)

“I used to think I should be watching my kids every second,” says writer Kim Brooks. But by the time her son was four, happily strapped into his car seat with iPad in hand, Brooks felt fine dashing into the store. “I was at my parents’ home, in the suburbs. It was a cool day, a safe area, the car was locked, he was fine.” A nosy neighbour with a camera, however, disagreed and called the cops. Alongside 100 hours of court-ordered community service, she wrote Small Animals: Parenthood in the Age of Fear, arguing for her son’s right to some freedom (even if it comes with some risk). While you might not leave your kiddos in the car just yet, parents of even small children can and should cultivate a sense of independence and comfort with some risk just by plopping a toy in front of them and going to another room for a minute. “It’s important to give them this alone time because it helps them learn to self-direct, organize their time, reflect and experience their own imaginations and solve problems on their own.”

“Equal and fair are two very different concepts,” says Alyson Schafer, parenting expert and author of Honey, I Wrecked the Kids. Kids have unique needs, skills and past-times that will require varying levels of time, effort and money. Veto the notion that all these should be even by right. “If you don’t make this clear, you’ll raise bean counters. He got a book, I get a book!” It’s irritating already, firstly, but more profound is the very anti-resilient message it sends: “This breeds entitlement and creates a mindset that kids are hard done by. The truth is the world doesn’t owe you a book or anything else,” says Schafer. Resilient kids learn to actively seek what they want rather than passively wait for its arrival.

DO LET THEM TALK TO STRANGERS

“Stranger danger” is probably every parent’s most illogical and overblown fear— the odds of stranger abduction in Canada are somewhere around 1 in 5.8 million. “You should actually encourage your kids to talk to strangers,” says Ungar. Not the “strange strangers,” he clarifies, “but your kid needs to know how to interact with sales clerks and coaches and neighbours.” In Brooks’ research, she’s heard overprotective parents are shocked with their 15-year-old can’t hold confident eye contact with a cashier. Don’t let it get so scary by fostering these relationships early—the more, the better. “Kids need a rich network of people they are engaged with, and not just peers but adults too,” says Ungar.

As you near the teen years, explains Matthews, parenting is less hands-on and more about vigilance. “While little kids need your full attention, bigger kids need to be let go.” Stop telling them what to do, stop solving their problems for them, and let them suffer the consequences of their actions. “Instead of being proactive, be reactive,” says Matthews. Make sure they know you’re present and aware, but wait for them to come to you for advice. Wherever possible, stay out of their peer relationships, don’t call anyone else’s parents (how embarrassing!), and let kids handle their own homework and school activities. Help if you can, but don’t solve everything yourself— it sends the not-subtle-message that they can’t do it on their own. “The resiliency lesson is you struggled but you managed,” says Schafer. “Then when life throws them some speed bumps, as is to be expected, they’re made of all the right stuff to handle them.” 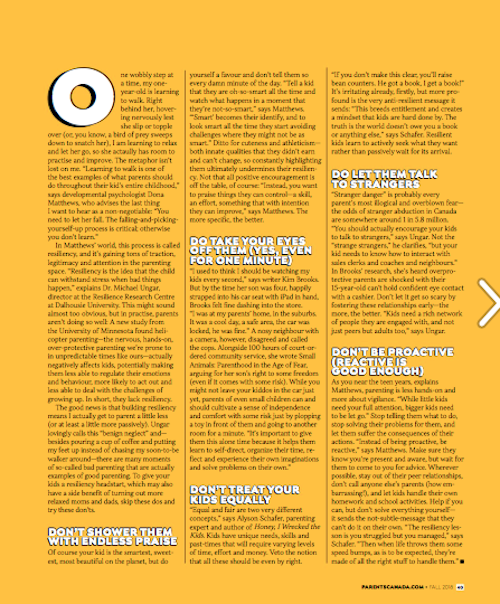