Is it time for fifth-wave feminism?

Review: How To Be A Woman by Caitlin Moran

Are you a feminist? Here’s a quick way of checking, says British journalist Caitlin Moran in How to Be a Woman. “Put your hands in your underpants,” she advises, then ask: “a. Do you have a vagina? and b. Do you want to be in charge of it?”

Phew, right? Germaine Greer wrote that the feminist moment was when you tasted your own menstrual blood. Moran’s done this, but would prefer a bag of Doritos. Her self-deprecating snark has been called the new voice of feminism, even the dawn of the fifth wave, some say, though Moran disagrees. “I suspect it’s around the fifth wave that you stop referring to individual waves and start to refer, simply, to an incoming tide.”

“But if there is to be a fifth wave of feminism,” she continues, “the main thing that distinguishes it from all that came before is that women counter the awkwardness, disconnect, and bullshit of being a modern woman.”

And that’s just what How to Be a Woman does, though count on a healthy dose of all three. See, Moran’s duh-let’s-get-on-with-it take on modern equality didn’t always come so naturally. Being a woman is no easy task.

Cut to Moran’s 13th birthday, in 1988, “the worst birthday ever,” for a glimpse of womanhood in the making. She’s shanty poor, one of six siblings (“My mother is like a Ford production line”), and overweight (her fave snack? “the Cheese Lollipop: a lump of cheese on a fork). Tween Moran has no friends (“unless you count family, which obviously you don’t”), confiding instead to Saffron the dog (“I’m in love with Chevy Chase”) and, though her younger sister routinely adds “you’re so pathetic” in the margins, her trusty diary.

And with her shamelessly forthcoming confessions – a dignified hat tip to you, Ms. Moran – comes the wisdom of retrospect: Her 35-year-old self, now a super-successful Lady Gaga-interviewing music journalist who would have her teen self squealing, adds a modern feminist context that you only wish you had the first time around. Luckily, a few decades in the trenches hasn’t squashed Moran’s humour in the slightest.

Grown-up Moran looks at the minutiae of lady life – don’t expect any theory or academia, thankfully – like teeny-weeny knickers (“I’m pro big undies”) and Brazilian bikini waxes (“a ruinously high-maintenance, itchy, cold-looking child’s vagina”). Moran’s crude when necessary – they don’t let me print that – but softly reassuring too: “If you can find a frock you look nice in and can run up three flights of stairs, you’re not fat.”

At this point, you’ll really wish Moran was a real-life friend you could bitch to. She’s down on stupid weddings, hates shopping with a passion, and has a lot of beef with Katie Price. But, much like a real-life friend, Moran can quickly get complicated.

She critiques tabloids and paparazzi (“I’ve read more about Oprah’s arse than I have about the rise of China as an economic superpower”), but buys ’em anyhow. She refuses to buy into beauty standards, but mocks her body (“My breasts are like peaches. But the kind you find in the bottom of your handbag”). And, following her difficult birth, Moran’s transformation “from a girl into a woman” isn’t always so sensitive to her childless counterparts: “You will look back … and regard yourself as a weak, spineless, dandified, pampered, ineffectual, shallow time-wasting dilettante.”

Greer would have plenty of brow-furrowing thoughts on this, but it’s Moran’s feminism that has this generation talking. “What is feminism? Simply the belief that women should be as free as men, however nuts, dim, deluded, badly dressed, fat, receding, lazy, and smug they might be,” she writes. “Are you a feminist? Hahaha. Of course you are.” 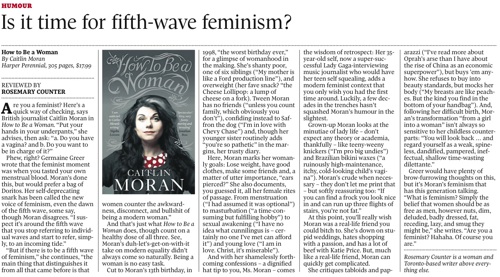