Celebrating the art of photography

Hanging on the ROM’s sloped wall, alongside Claude Monet and Charlie Chaplin, is an unlikely Canadian celebrity: Conrad Black, pre-prison, photographed by Jonathan Becker at Black’s lavish Palm Beach estate. How did Lord Tubby become the Canuck celebrity of choice? Here’s how the story goes.

“It all started as a glimmer in Graydon’s eye,” says Vanity Fair’s David Friend, editor of creative development. He’s not referring to Black’s imbroglio, of course, but to the much-hyped new photography exhibit, Vanity Fair Portraits: Photographs 1913-2008.

Four years ago, Vanity Fair’s editor-in-chief — and Canadian–born Zoomer — Graydon Carter called London’s National Portrait Gallery about a possible collaboration to celebrate the mag’s 95th anniversary. “Eagerly, they said, come on over,” says Friend. With an armload of archival pictures in hand, Friend met with Terence Pepper, curator of photographs at the National Portrait Gallery. As co-curators, Friend and Pepper sifted through a century of iconic images — from a veiled Gloria Swanson to a de-robed Demi Moore — and selected 150 portraits of writers, athletes and leaders of the avant-garde.

The result is a strange and wonderful mix of high and low culture where Albert Einstein meets Brad Pitt (sorry, Brad). Fast-forward a few years, and Vanity Fair Portraits is breaking all sorts of records. It was the most-attended paying show in the history of the Scottish National Portrait Gallery in Edinburgh, and the London exhibit stayed open until almost midnight to accommodate crowds.

For its farewell venue, the show lands  this fall at Toronto’s very own Roloff Beny Gallery at the ROM Crystal. The  exhibit is headlining a broad series on the nature of celebrity, explains Francisco Alvarez, managing director of the Institute for Contemporary Culture at the ROM, including culture-themed lectures and the glamorous Celebrity Watch gala, leading up to Vanity Fair’s star-studded arrival. A century’s collection of fame has Alvarez asking, “What is the value of Julia Roberts compared to Katharine Hepburn?”

And, so, in the interest of high low comparative study, former super-couple Canadian Mary Pickford and Douglas Fairbanks is pictured next to the photo of Black, wife Barbara Amiel snuggling at his knee. “It’s one of the great renderings of Black,” says Friend, “but Becker’s poking fun at him, too. It has that double-edged sense of irony.” 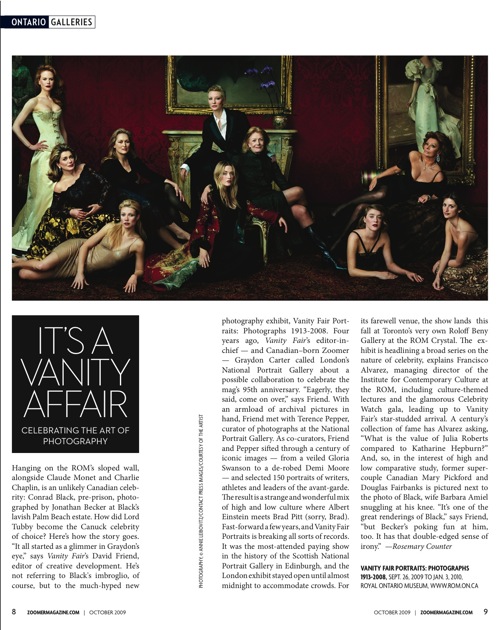