Think you won’t spill the beans? Think again. Keeping secrets is near impossible—even for spies.

While out to dinner with close friends, Marie’s best friend’s boyfriend leaned across the table. Half-joking and half-serious, as his giggly girlfriend listened on, he asked Marie for a little reassurance. His girlfriend had been getting too close for comfort with another man—just a friend from work, she insisted—but he wanted the scoop from a reliable source. “Tell me the truth,” he asked Marie. “Do I have anything to worry about?”

Marie, a 28-year old public-relations professional in Mississauga, Ont., considers herself trustworthy. She admits that she likes to gossip (don’t we all?), but, she insists, “when it comes down to it, I can keep a secret.” As such, Marie forced a smile and assured him that there was no funny business going on. Spoiler alert: Marie is lying.

For many, keeping secrets doesn’t come easily. A recent study—commissioned by a Chile-based winery (go figure)—found that, while 83 percent of women describe themselves as “completely trustworthy” when it comes to secrets, six out of 10 women can’t keep their lips zipped. No matter how scandalous or frivolous, a secret— of which we score three delicious nuggets each week—will typically be spilled just 47 hours later. It’s official: Squealing on a secret—especially a juicy one—can be near irresistible.

But maybe it’s not all your fault. Daniel Wegner, a psychology professor at Harvard University, has spent two decades studying the effects of thought suppression. “As soon as you decide to keep something secret,” he says, “you try not to think about it, you worry you might blurt it out and then you become obsessed with it.” Scientists call it “ironic processing”: The harder you try to keep quiet, the harder it is to keep quiet, until building pressure inevitably causes the exact opposite of your intent. Wegner believes that we all—women and men, gossipy or otherwise—overestimate our ability to keep secrets. That said, no one would deny that some people are better at keeping secrets than others. “There are some who seem like savants of secret-keeping: They are really good and have steel-trap minds,” he says, “but then there are certain people who just blab about everything.”

So, what makes one person straight-faced and another looselipped? For Arne Kislenko, a former intelligence officer who is currently a history professor at Ryerson University in Toronto, it comes down to an officer’s integrity. “Training is likely to make someone a better officer, but, of course, that person is still potentially ‘vulnerable’ if he or she doesn’t have a strong commitment or ethic or has been tapped at a critical breaking point because of money, sex or ideology.”

But even the professionals, it seems, aren’t any different from you and me or Marie. She’s not a spy (I’m pretty sure), but Marie has also taken an oath—bound by friendship, not profession, but an oath nonetheless. “And humans, no matter what their knowledge or training, are always subject to their humanity,” says Kislenko. “They can be lured to release information.”

It’s ideology that ultimately got to Marie. “Keeping this secret was really draining,” she explains, “especially when I was put in a position to lie. I’m not a liar.” So, after a year of covering for her friend, affirming false whereabouts and editing posted Facebook pictures to appear more innocent than they really were, Marie reached her breaking point. When Marie was contacted by the other man— another sad fellow who was convinced that his lover would soon be just his—she told him the truth.

“I’ve heard dozens and dozens of versions of this story over time,” says Nikita Crook, a Vancouver-based psychotherapist (and, since she always operates beneath a confidentiality clause, a professional secret-keeper). “We’re not just talking about a secret here; we’re talking about betrayal, infidelity and ethics,” she says. It’s suddenly a secret on top of a secret, layered by those who know and those who don’t know that you know. Things can get complicated fast, and they often do.

How someone else’s private business grows to consume your thoughts and energy, though, is the dirty little secret of secrets. “I don’t think people are conscious of it,” says Crook, “but a topic wouldn’t be interesting if it didn’t touch on a personal worry or distress.” That’s right, psych majors: If the information is so titillating that you can hardly resist revelling in it, look a little closer—your own deep, dark secret may be on display.

When I ask Marie how she feels about infidelity, her tone shifts. She, too, was cheated on, she admits, and the pain is still very raw. “I think it’s one of the most selfish things you can do to a person,” she says flatly. So, when her pal’s infidelity drifted from confused and periodic to constant and indefinite, Marie sided with the cheated on and spilled the goods.

Whether Marie’s betrayal is justified, though, remains debatable. It’s the difference between loyalty and integrity, between saving the friendship and being able to sleep at night. Because far from tearing you up inside, secret-sharing—the good witch to secret-squealing—is supposed to feel as good as it is good for you.

Are secrets good for the soul? Well, kind of. Anthropologically, explains Crook, they are the transmission of culture and ideas. Developmentally, they aid in the creation and complexity of friendships. Socially, secret-sharing bonds you and your confidantes in ways that small talk never could. And, of course, personally, reciprocal secret-sharing can feel so damn good that the only thing better is passing it on.

Just learn a lesson from Marie: Her urge to purge has been satisfied, but her best friend won’t take her calls. Share carefully and selectively—and with the same sensitivity that you reserve for your own secrets. And remember that every secret shared is also a secret squealed—depending on where you’re sitting.

HOW TO KEEP A SECRET

Admittedly secret-challenged? Us too. But secret-keeping is habitual, says Arne Kislenko, a history professor at Ryerson University in Toronto. And, luckily, you needn’t be a spy to learn the tricks of the trade:

Ask questions: Before you commit to secrecy, ask why it’s a secret, from whom and for how long. Know the boundaries and you’re less likely to cross them.

No hinting: Being privy to private information can make you feel important, explains Nikita Crook, a Vancouver-based psychotherapist. Resist the juvenile urge of I-know-something- you-don’t-know.

Don’t drink: If you think a few glasses of wine will lessen the pressure, you are very wrong. Alcohol diminishes willpower, duh.

All right, tell someone: If holding the secret is simply too much to bear, says Daniel Wegner, a psychology professor at Harvard University, go ahead and tell, but choose someone who is more trustworthy than you are. 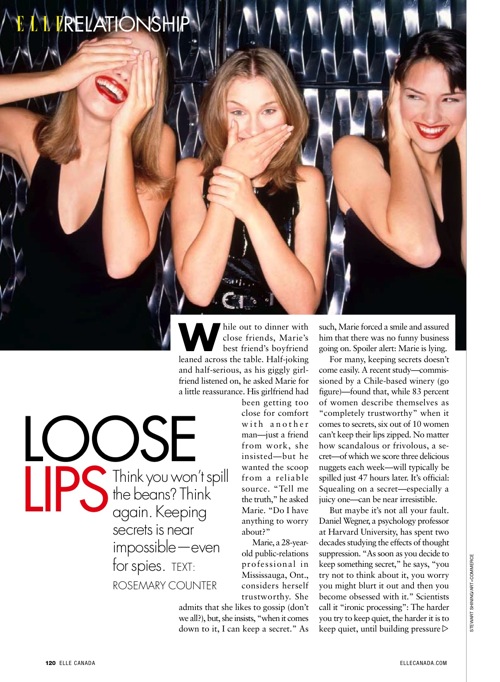