When ladies love their liquor

In a dingy basement apartment, Taylor and Molly, both 21-year-old students at an unnamed Canadian university, discuss their evening plans. More specifically, they discuss the availability of alcohol. “They’ll have a couple kegs,” promises Taylor, a biology major, “and mixed drinks like vodka crans, whisky sours, rum and cokes.” Unconvinced that will be enough, Molly pops three tallboys into her purse. Taylor fills a Gatorade bottle with white wine from a box.

It’s the beginning of a wild night in the new documentary Girls’ Night Out, airing this month on CBC, that zooms in on young women’s drinking habits—from their perspective. “It’s an uncomfortable topic for a lot of people,” says director Phyllis Ellis, herself a mother of a 22-year-old girl. “But I’m not going to make it softer. I’m just going to deal with the truth that they give me.”

The truth is that binge-drinking—defined by the Centre for Addiction and Mental Health as consuming five or more standard drinks (four for women) on a single occasion—is an epidemic: 18 per cent of high school students admitted they binged at least once last month; 32 per cent of Canadians aged 20 to 34 binged 12 times in the past year; and, proving this isn’t a freshman-specific problem, 19 per cent of Canadians aged 35 to 44—almost one in five—did the same.

That people sometimes drink to get drunk is nothing new. What is new is that binge drinking among women has increased at a rate seven times that of men, according to the American Public Health Association. While men still consume more alcohol, women metabolize it differently—the effects occurring faster and lasting longer—and are more vulnerable to long-term health effects. The risk of liver cirrhosis, brain damage and heart disease due to alcohol are all greater in women than men.

At the same time, the way young women drink is different. “A binge is bigger than it used to be,” says Ann Dowsett Johnston, author of Drink: The Intimate Relationship Between Women and Alcohol, which inspired the film. “He’s drinking beer while she’s drinking shots. She’s two-thirds his size and probably didn’t eat dinner. Women live with more alcohol [than men], they pre-drink, they have a habit of purging and starting again.”

To Johnston, it’s no coincidence this generation of women is hitting the bottle harder than ever before; it’s the first generation to grow up with what she calls “Big Alcohol.” To target the underperforming young female market, which was too calorie-conscious for beer and not sophisticated enough for wine, the spirit industry invented the “alcopop” (e.g. Smirnoff Ice, Bacardi Breezer, Mike’s Hard Lemonade) and advertised it aggressively throughout the mid-’90s. In the same moment, Bridget Jones got adorably trashed alone in her apartment and Carrie Bradshaw made the cosmopolitan her go-to cocktail. “A whole generation of young women were taught that to be sophisticated, you drink vodka. They skipped the rest and started with hard liquor,” says Johnston. A more recent iteration may be what Punch, an online magazine devoted to intelligent writing about booze and drinking, calls the “whisky woman”—tough, “bro girl” types out of a Gillian Flynn novel with a penchant for downing Maker’s Mark who have become recurring features in men’s magazines.

Most of the young women who follow this drinking model are not alcoholics. A better term may be “almost alcoholic,” a new descriptor for people with alcohol-related problems that don’t officially “qualify” as alcoholic. “It’s a spectrum,” says Joe Nowinski, author of the 2012 book Almost Alcoholic. “There’s this middle zone of problem drinking with a mild to moderate problem, and there are a lot of people there.” In 2014, the National Survey of Drug Use and Health reported 90 per cent of excessive drinkers don’t meet the definition of alcoholism. In fact, because no general consensus can define it, even the word “alcoholism” was replaced in medical texts with “alcohol use disorder” in 2013.

“I didn’t day-drink, I didn’t need a drink in the morning; I could go a week or two without booze,” says 36-year-old Jen McNeely, a Toronto-based blogger. At 19, a guidance counsellor directed her to Alcoholics Anonymous. “I didn’t see anyone like me there, so I didn’t stick around,” she says. She drank hard for a dozen more years—professionally, almost, since she’s the brains behind the girl-about-town website She Does the City—before admitting she had a problem. “I wasn’t sure then if I was an alcoholic. I was a binge drinker.”

Now sober, McNeely appears in the film, spliced alongside younger versions of herself: “I’ll drink just to get drunk and I think that’s what most people do,” says Victoria, 21. “We all feel like it’s the normal thing to do,” says Taylor. It takes Molly eight drinks to “go from here to not here. Like the lights are on but no one’s home.”

That’s the blackout, the hallmark of the binge drinker, when the blood alcohol reaches a saturation point and shuts down the hippocampus, the part of the brain where long-term memories are made. People in blackouts are not passed out, but can walk, tell jokes, have sex and drive cars. They can appear normal and functional to others. The majority of people never experience a blackout, but they’re not uncommon among drinkers. A 2002 study from Duke University found 51 per cent of drinkers had blacked out before; the National Institute on Alcohol Abuse’s 2009 survey of 4,500 students found 12 per cent had blacked out within the past two weeks.

Since a blackout is defined by its nothingness, few accounts exist to offer insight into the experience. In the film, Sarah Hepola, author of Blackout: Remembering the Things I Drank to Forget, describes a moment, “when the curtain lifts again” and she finds herself “on top of a guy I’ve never seen before, and we’re having sex.” It was neither the first time she suspected she had a problem, nor the rock-bottom moment that would inspire her to quit: “My rock bottom lasted for five years,” she says.

Hepola’s story isn’t rare either; in fact, it’s commonplace for the women in Girls’ Night Out. Adriana, 25, recounts waking up beside a man she met the night before and discovering a pair of handprint-shaped bruises on her hips, though she had no memory of having had sex. In an era where consent is paramount in the culture—however it may play out in the courts—it’s a troubling and confusing storyline. “I never considered that assault because I know how I behaved when I was out and I knew the person I was,” she says, noting her partner was intoxicated too and perhaps equally incapable of giving consent. “The fact that I don’t remember it is my fault.”

Navigating this issue was particularly challenging while making the film, says Ellis. “Rape is rape, and it doesn’t matter what you wear or do,” she says. “But there is another part to this conversation we need to be having. Even if it’s uncomfortable, even if it pisses people off, even if we’re wrong.”

Hepola too doesn’t consider her own blackout-sex story an assault. “Some people are of the opinion that any sex in a blackout is rape,” she says. “I’m not of that opinion.” Hepola is clear that to differentiate passed out (where a woman is unconscious or physically incapacitated due to alcohol) from blacked out, but she believes there is a complicated grey zone, where a woman appears to outsiders to be functioning or even normal. In Hepola’s case, alcohol obliterated her shyness and insecurity and offered a temporary out-of-character sexual confidence that was gone by daylight. Hepola believes it’s vital that this grey zone be part of the discussion about women and binge drinking, which often brings women in her particular position regret, shame and fear when their decision-making abilities are impaired by alcohol. “Many yeses on Friday night would be noes on Saturday morning,” she says.

The women in the film suggest that binge drinking can evolve into alcoholism—or scale back to moderation. Hepola ended up identifying as an alcoholic and has been sober for six years. Jen McNeely has been clean for five years. But others have managed to embrace moderation. “I decided I actually wasn’t an alcoholic,” says Adriana, now a nutritionist, who can easily enjoy a single glass of wine. “It was the environment I had put myself in and the people I was surrounding myself with.” That said, she believes the distinction is oddly arbitrary: “They say you’re a full-blown alcoholic when you need a drink in the morning, but girls like me need three bottles of wine before they go to the bar. What’s the difference?”

To steer university students toward lower-risk drinking, a new year-long campaign is launching across Canada. Developed by Girls’ Night Out producers with the Canadian Centre for Substance Abuse, #RethinkTheDrink will pick up where Ellis’s film ends, with dramatic webisodes, resource lists and on-campus screenings during always-boozy frosh week. They’ll be promoting #GirlsNightIn and an introspective Tumblr series called “Letters to 18-year-old me.” The goal is online engagement, open dialogue and, hopefully, some kind of change. “It’s going to take more than a village,” says the campaign’s spearhead, Deborah Day. “A lot of us have our heads in the sand.” 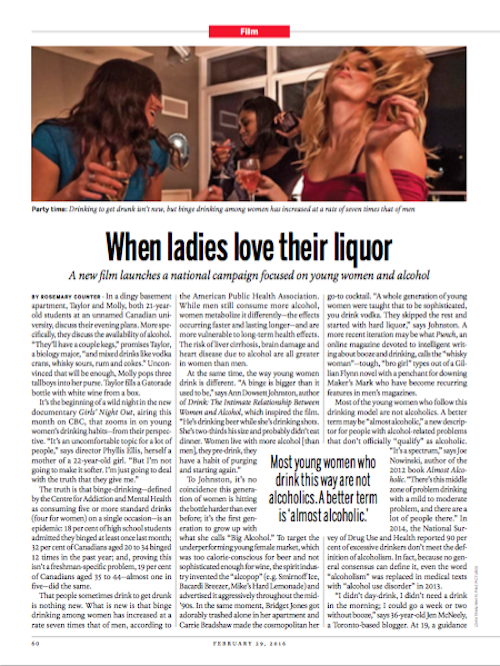 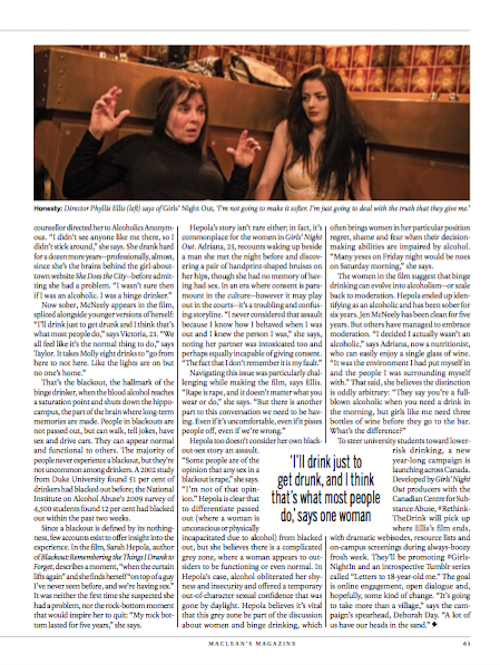