Wash your troubles away with a past-life relationship cleanse. It’s as easy as counting 1, 2, 3.

The morning before I went for a “hypnotized relationship cleanse,” I was so nervous that I broke out in hives. I’d spent days fielding opinions from both the skeptical and the superstitious. But because my anxieties are often misplaced, it was another pile of my boyfriend’s dirty dishes that sparked my wrath.

“That anger is not about a coffee cup,” says Debbie Papadakis early on in our session. The Toronto-based consulting hypnotist makes a living diving into her clients’ subconscious memories— from this life and otherwise—in search of the real sources of conflict. “It’s a relationship energy cleanse,” she says. “And every time we do it— every single time—it works like a charm.”

It’s a hefty claim, and one that is widely disputed by conventional therapists. “I’m troubled by the word ‘cleanse,’” says Dr. David McKenzie, a Vancouver-based marriage and sex therapist. “Anything that offers to solve your relationship dilemmas in a few days or less is wishful thinking. Problems are usually long in the making, and they take a while to undo and resolve.”

But, in the spirit of my New Year’s resolution (“I will not nag, I will not nag!”), I find Papadakis’ speedy approach admittedly appealing. Hypnosis, the mental state of heightened suggestibility, has long been used to quit smoking and curb carb cravings, so why not my habit of sweating the small stuff?

I’m sitting on her leather couch, having refused a blanket because my palms are sweaty already. Believing isn’t a prerequisite, she says, but an open mind is. Barring that, Papadakis claims that she can hypnotize 90 percent of the general population. “Take deep breaths and relax,” she whispers. “Feel the relaxation move from the top of your body all the way down, down, down to the bottom of your feet.”

She assures me that I will be hypnotized after five minutes of being in this relaxed state. I feel relaxed, sure, but I’m not behaving like volunteers at a school assembly who fall under the spell of an entertainment hypnotist. (In other words, I am not clucking like a chicken or faking an orgasm.) Papadakis says that that’s a misconception on my part. It’s one of the reasons that the hypnotist community launched World Hypnotism Day on January 4. The goal is to debunk the notion that patients lose control, that it’s a pseudoscience and that it’s associated with the occult.

Contributing to the lore, though, is the story of 34-year-old Sophie*, who found Papadakis after experts (Western doctors, Chinese medicine men, acupuncturists, naturopaths) couldn’t find a reason for her decade long amenorrhea (the absence of menstruation). Sophie and her partner were ready to start a family, but her condition was putting stress on their relationship.

The first two sessions—at a whopping $200 an hour (and a session can last all afternoon)—didn’t work for the skeptical Sophie, who felt like she was just playing along with her eyes closed. But in Sophie’s third session, a clear vision poured out of her.

“All of a sudden, I was 17 years old, in another lifetime and pregnant with my brother’s child,” she says. “Ostracized by the elders of the community, I mercy-killed the child to protect it from further retribution.” Sophie wept while Papadakis facilitated a forgiveness process in which Sophie was prompted to let go of the past while carrying the lessons to the present. A week later, Sophie got her period.

If chills are running down your spine, you’re not alone: A study at Ottawa’s Carleton University found that 27 percent of Canadians surveyed believe in reincarnation. There is even some science behind it: Gary Schwartz, a psychologist at the University of Arizona, compiled details of 70 cases of “cellular memory” (when information is stored in peptides in the brain and other organs) in transplant patients. One of the cases is a young girl who received the heart of a murder victim and later identified the killer from vivid nightmares.

My own experience, though, isn’t so sensational. We have been working for nearly an hour, and, while my descriptions of childhood are vivid (fighting with my brothers mostly), I’m not tapping into any new memories. “I want you to let go of this current life and go to another time,” says Papadakis. “I will count to three, snap my fingers and you’ll be there.”

“I’m in an old farmhouse,” I say methodically. Pressing me for details, she asks me to describe what I see. “Two rooms: a kitchen and a bedroom.” (Interestingly, this vision is exactly like the house at Pioneer Village, where I volunteered when I was 12.) “My body hurts,” I say. “I’m too tired.” Slowly, and in three-word sentences, as Papadakis prompts me, I describe my mother making soup, claim to have two children and complain about a brutal pioneer workload and the fights it causes with my partner. Long ghost story short, Papadakis directs me to forgive him for our lives of labour, release my anger and let go. “Leave all the bad memories, but take the lessons with you for this life,” she says before guiding me into the light and back to this life.

After, when a proud Papadakis asks me how I feel, I confess my doubt. I felt like I was imagining rather than reliving. But Papadakis assures me that, when I get home, I will notice that my relationship is much lighter.

Back on the home front, while cleanliness is still a hot topic of debate, life does feel a little cleaner. (Nagging a man in national print, by the way, has proven to be an excellent incentive to curb the habit.) He is picking up after himself, and I’m making a conscious effort to be more forgiving—and more grateful. At least in this life, we have a dishwasher. 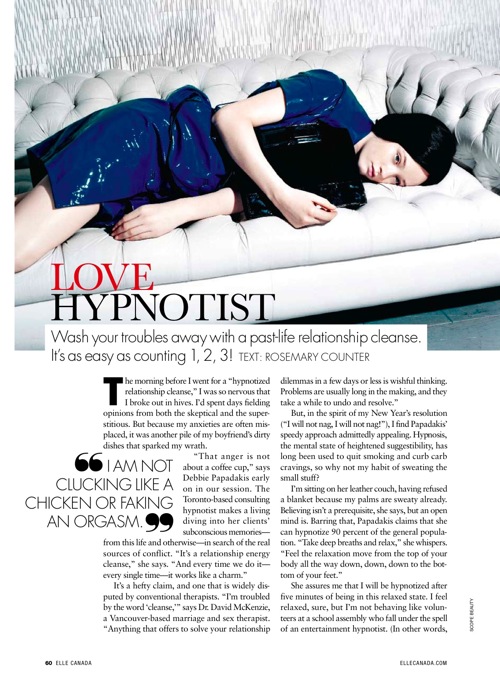 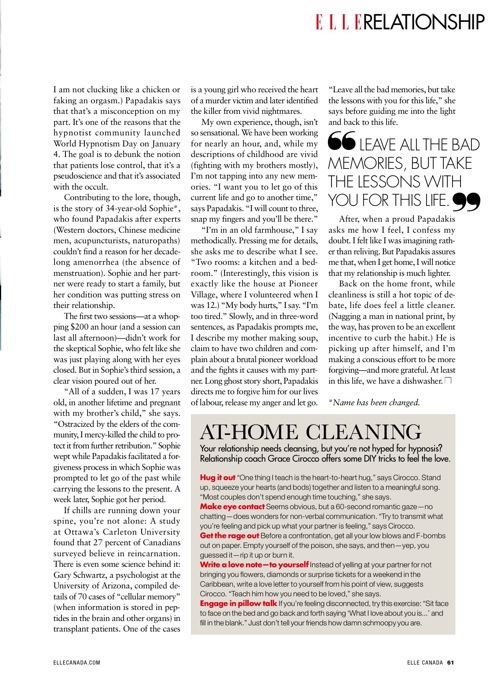