Is BYOB (bring your own booze) tacky—or just economical?

Depends on the party and how much you want to impress your guests, says Toronto-based party planner Mona Halem of Lady Luck Entertainment. “It’s just [more] work for guests; they want to go out and leave their to-do list behind.” If you’re inviting your new gym pals over for boozy smoothies or serving wine and cheese to colleagues, be a generous host, says Kimberly Law, an etiquette consultant and founder of Personal Impact Image Management in Vancouver. “But if it’s close friends or family, BYOB is not a problem.” What is tacky, however, is showing up empty-handed—always bring a little something for your host. “Besides wine, flowers, chocolates or a small edible gift is nice,” says Law.

I just got out of a long-term relationship. Is going Dutch the standard in dating?

“Ninety-nine percent of women aren’t cool with it on the first three dates,” says dating expert Christine Hart, owner of the Toronto-based dating service Your Date Coach. Turns out men agree. “Taking a women out is a very nice thing for a guy and you should graciously receive,” she says. But after a few dates, you’re probably in real relationship territory, which means sharing the responsibility sometimes. “Dutch doesn’t have to be splitting bills down the middle,” says Hart. “It could be you pay for dinner, I pay for the movie.”

How can I ask for separate bills without sounding like cheapskate?

You’re dining with a friend—she has the surf and turf, you nurse a side salad—but when the bill comes she wants to evenly split the tab. Do you fork up or cheap out? “It depends how close you are to the person,” explains Law. If you don’t see them often and this is the first time it’s happened, just split it, she says. But if this is a regular habit, lay the ground rules before you see a menu. “Before you get to the restaurant, say you’re on a bit of a budget, [and ask if] it would be OK to get separate bills.” If you’re too shy to admit a lackluster salary, suggest a great little place you know and love—with reasonably priced entrees.

An over-poster is hogging my Facebook feed. How can I unfriend them without making an enemy?

You know the ones: You met once, ended up Facebook friends, but now hourly posts about Glee are clogging up your inbox. Can you take back your e-friendship? Sure can, says Law. “If it’s someone you barely know, you don’t have to have a conversation,” she says. But if it’s an actual pal or colleague, you should offer them an explanation, whether via quick email or face-to-face chat. “Say you’re bombarded with online info, but you’d still appreciate friendly phone calls,” suggest Law.

My friend is a text-aholic. How can I get her to lay off when we’re together?

Even the tackiest technology addicts know it’s rude to BBM when you’re supposed to be hanging out. So it’s usually only a matter of nicely calling them on it, says Law. “Tell them you understand they like to text a lot, but it’s really nice when you’re together to just focus on each other.” That should convince her to unplug for at least a few hours, and if not, say it again but be firm. They may think you were just kidding or it didn’t really bother you, so use language to make it clear you feel disrespected.

My colleagues want to be Facebook friends; I want my private life. What to do?

You could just ignore it, says business etiquette expert Terry Pithers of speaking and consulting firm Style for Success in Edmonton, but that might make for awkward elevator rides. A better strategy is honesty, via casual e-note. “Just say that you try to keep your work separate from your private life,” explains Pithers, and then go for the deflect: “Instead, suggest they join you on LinkedIn.” Nothing says, “we’re business friends” better.

Help! My co-worker is pressuring me for my annual review results.

“If someone asks you how your review went, say ‘pretty good’ or ‘not bad,’” advises Pithers. Reviews are between you and your boss, and bragging about a glowing one—or bitching about a scathing one—are both bad career moves, as someone’s promotion could leave the other jealous or resentful. Blurt out the details now and you may regret it later, he says.

Can I ask my co-worker how much they make?

“There are certain things you don’t ask upfront: politics, sex, money,” says Pithers. “Asking people what they make falls under that; it’s just bad social etiquette, and it can start a rivalry.” And if someone’s nosing around your bottom line, use a ittle bit of self-deprecating humour to defuse the situation. “Say, ‘not enough’ or ‘never enough!’ suggests Pithers.

I hate my haircut; should I still tip my hairstylist?

No, you shouldn’t, says Law. “Tipping is a form of gratitude, but it isn’t a requirement.” So if your wash was ice-cold and you’ve suddenly got bangs, by all means, skip the tip. Even stylists agree: “I cannot imagine tipping someone for a job that isn’t well done,” says hairstylist Marc Anthony. But don’t let the tip speak for itself, he adds; speak up if you’re anything less than thrilled. A good stylist will fix it for you, or find someone who will, and you may be inclined to tip after all.

Is it still better to be underdressed than overdressed?

The adage is officially wrong: When it comes to dating, says Hart, always pick the dress over yoga gear because “you’re overdressed, but you’re looking good.” Same goes at the office. “If you’re underdressed, it affects your confidence,” says Pithers. And if you show up to a party in cargos because you didn’t get the memo that it was cocktail attire, take celebrity fashion stylist Phillip Bloch’s advice: “You’ve got to own it,” he says, so don’t apologize to everyone you meet or hide out in the corner. Next time, be sure to inquire about dress codes. “Never have the fear to ask,” says Bloch. “People love to talk about their parties.”

A cleavage-y friend shows it all off at work. Should I say something?

While you’re trapped in nylons and collars, your co-worker prances about in short skirts and bosom-baring tops. It may be tempting to tell her to cover up, but this is a land mine, says Pithers. “If you’re a woman criticizing another women’s clothes, they’ll look at you all that more critically. Like, Who is she to tell me that? Did you see what she wore the other day?” You don’t want to go there, so compliment her on the day she dons a suit jacket, but otherwise button up. As for your own work gear, Bloch suggests you remember these big three: “Age appropriate, office appropriate, season appropriate,” he says. “A halter top in January is just too much.”

I hate my best friend’s boyfriend. Do I have to invite him when we go out?

“You might not understand your friend’s relationship, but she’s in it, and as a best friend, you have to support them,” says Hart. But while any situation with significant others requires an invitation, “girls’ night” is a lovely loophole to have her all to yourself.

There’s a bit of a double standard happening here—women make like Sex and the City while similar male disclosure is dump-worthy behaviour. But don’t let that deter you, says Hart. “It’s different, guy to guy; there’s just not much interest in detail. It’s more like, ‘Did you get laid last night? Awesome, me too. Is that a new flat screen?’” As long as your gal pal isn’t shifting awkwardly in her seat, chat away, says Hart. Just keep anything too R-rated for the privacy of your own home: “If you’re in a restaurant, that’s just tacky!”

My boyfriend didn’t get invited to the wedding. Can I RSVP for him anyway?

Absolutely not, says Law, but try this: “Say, ‘I’m dating a really great guy, and I’m wondering if there’s room on the guest list for me to bring him,’” says Hart. Stress that it’s OK either way so the bride doesn’t feel any pressure, and don’t take a no to your plus-one personally; enjoy yourself stag.

Um, that was fun, but I have an early morning meeting. How do I show him the door?

The trick, says Hart, is to mention it pre-snuggle: “Set it up, like ‘I’ve had so much fun with you tonight, but I have an early meeting and I know if you stay over I’ll be distracted,’” she says. And so he knows it’s not a blow-off, Hart suggests you add something positive to boot, such as: “If you don’t have plans on Saturday, I’d love it if you stayed over then.”

How do I get my man to manscape?

Exclaiming “You’re gross and I’m not having sex with you!” is all wrong, says Hart. Instead, bring it up with a sexy trip down memory land, such as: “Remember the time you tripped when we were on vacation? That was awesome. I’d love it if you could do it more often.” And if he’s never trimmed at all? Mention it’s a fantasy of yours, then offer to hop in the shower and do it for him.

I carry HPV—when should I tell him?

The experts agree you’ll want to table this before you hit the heavy petting stage in dating. “It’s important to divulge soon, particularly since oral sex can transmit the HPV virus,” explains Lori Brotto, a women’s sexual health expert at the University of British Columbia Sexual Health Lab in Vancouver. If you’re stuck on finding the right words, says Hart, try this: “I’m super attracted to you and want to have sex, but I have this and these are the precautions we need to take.” 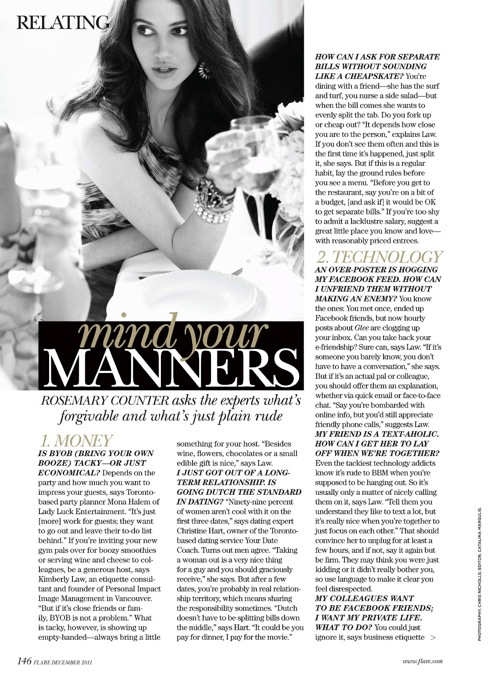 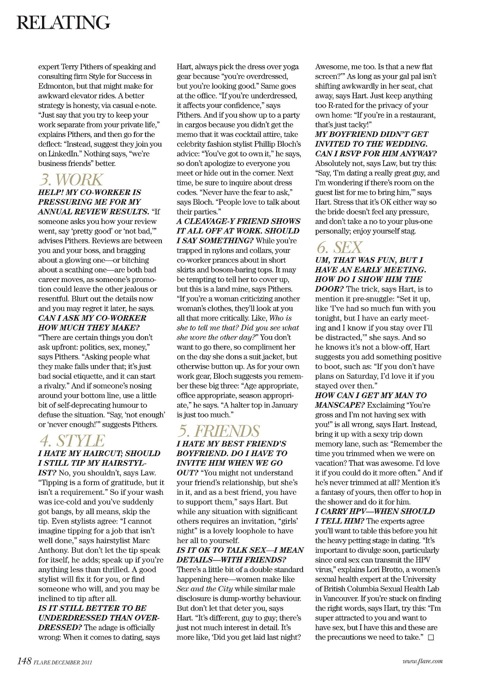