Is a midwife the right choice for you?

We explored the myths and truths about midwifery

Caitlin Oomen of Aurora, Ont., gave birth to her first child, a daughter named Lilith, in February 2012. Like all new mothers, the then 25-year-old craft artisan was nervous and excited, and everything in between. “It was the biggest thing I’ve ever gone through.” Oomen had read and researched her birth options. “I decided what my ideal birth would be—minimal interventions, having authority over my own body and having someone respect my decisions. Plus, I really wanted to use a midwife.”

While her husband, Benjamin, was very supportive, many of the people she told about her decision to use a midwife seemed unaware and uncertain of the role and scope of midwifery, and expressed their concern for her safety. So “it was sometimes tough to stand my ground in my decisions,” says Oomen. In any birth, tough choices abound: midwife or obstetrician? Hospital or home birth? Medical intervention or au naturel? We looked into the details to help you make your decision.

“The biggest misconception about going with a midwife is that you have to have a certain kind of birth,” says Katrina Kilroy, president of the Association of Ontario Midwives. “Our training allows us to support natural childbirth,” which can include everything from water birth to home birth, “but not all of our clients go with that option.”

In fact, 75 percent of mothers-to-be with midwives choose to give birth in a hospital. Midwives’ clients have much lower rates of C-sections, inductions and interventions—but having a midwife doesn’t guarantee labour will be a breeze. And if your needs change mid-delivery, a midwife won’t push any agendas or rigid birth plans. “We see women as the primary decision maker and emphasize informed choices,” says Kilroy.

Vancouver family physician Dr. Tania Lo has delivered many babies, and as she knows, “it doesn’t always go the way you planned.” When it came to the birth of her own daughter last October, Lo had an unconventional plan: “I wanted to attempt a drug-free birth using a method called hypnobirthing, where self-hypnosis is used to control labour pains,” she explains.

She decided to go with a home birth and a midwife, but after 24 hours of labour, the back pain was too much and Lo moved to hospital for an epidural. When it was discovered that the baby was facing up rather than down in the birth canal, they consulted an obstetrician and opted for a vacuum birth.

Myth #2 Unlike doctors, midwives deliver babies, and that’s it.

Most people understand what doctors do, but because midwifery was not regulated in Canada until 1994, many people have limited—if any—knowledge about the practice. “Midwives are primary care providers of the full range of prenatal care during labour and postpartum,” explains Kilroy. “We do all the normal care for pregnancy and a newborn. All the tests, ultrasounds and blood work are within a midwife’s scope.” Depending on their clinic’s resources, these may be done at the clinic or at a hospital.

Monitoring epidurals and managing oxytocin to stimulate contractions in hospitals are also within midwives’ scope. Vacuum births and C-sections, though, are not, so for these you’ll need an obstetrician. They have a decade more training than the direct-entry, four-year midwifery program (which includes two years of placement with a senior midwife) offered at seven universities across five provinces.

So you might be wondering: Is a midwife equally qualified to deliver babies? A better question, says Dr. Douglas Black, president of The Society of Obstetricians and Gynaecologists of Canada (SOGC), is: Aren’t OB/GYNs overqualified to look after regular low-risk deliveries? Many experts say yes: That includes the World Health Organization, which states that “midwives are the most appropriate primary health care providers to be assigned to the care of normal birth.”

In Canada, an average OB/GYN oversees 250 deliveries per year, whereas a midwife is capped by their province at around 40 clients. “Our hallmark is continuity of care—meaning we’re available to women 24/7,” says Kilroy. Instead of a potentially rushed prenatal appointment, Oomen had lengthy meetings with her midwives—who worked in pairs, so one was in the clinic while the other was on call.

While in most provinces midwives are primary care providers—“meaning that you can just call a midwife directly to book them,” explains Kilroy—the numbers of supply and demand don’t always add up. In Ontario, for example, 40 percent of pregnant women who want midwives can’t get one. “The joke is that right after you’ve peed on the stick, you should call a midwife and get on the list. Well, tell your partner, and then call,” Kilroy laughs.

The math: More than 380,000 babies were born last year in Canada. For many reasons—including the long hours—there is a dwindling supply of both family doctors who do deliveries, and OB/GYNs. Midwives can close this gap. However, midwifery programs are swamped with more applicants than they can handle; in Alberta, for example, Mount Royal University in Calgary accepts only 14 students a year into its program, but receives more than 200 applications annually. Only 1,000 midwives currently practise across Canada, and more than half of them reside in Ontario. The cap of just 40 deliveries a year—a mere fraction of the 120 births performed by midwives in Europe and the United States—leaves another startling gap: Due to a lack of primary care providers, according to the College of Midwives of Ontario, in a few years up to 10,000 women in that province alone won’t have access to maternity care until the day their contractions start.

Before regulation began in Canada, midwifery was inaccessible to many women because of the cost. With regulation, however, came hospital privileges, as well as funding for medication and care, at least in some provinces and territories. Currently there is no regulation or funding in P.E.I., Newfoundland or Yukon. In New Brunswick the Midwifery Council is working on developing policies, registration procedures and standards, but there is no funding available. (For more information, go to canadianmidwives.org.)

While provincial details vary, most midwives are paid around $3,000 per birth (by the customer unless the province covers it). That’s between $82,000 and $105,000 annually. Three grand per birth may still seem expensive, but since the average Canadian in-hospital birth with an OB/GYN’s attendance costs about the same (but without the nine months of pre-care), midwife-assisted low-risk births can slash healthcare costs. About a quarter of midwifery clients will give birth at home, eliminating a hospital bill altogether, and those who do give birth in hospital stay half as long on average. Mothers using midwives are less likely to be hospitalized prenatally, less likely to undergo episiotomies, and because of midwife home visits following birth, they’re also less likely to show up in emergency rooms.

Myth #5 Midwives work on the fringes of medical care.

It’s easy to imagine midwives and doctors are at odds. But the reality, now more than ever, is that the SOGC is working hard with midwives to develop a multidisciplinary approach to maternity care. “We’re working on links and partnerships to represent the full range of maternity care providers in Canada,” says Black of the SOGC.

As midwives become increasingly mainstream in this country, they are gaining more acceptance as well as hospital privileges—which allow them to admit clients to hospitals for care—although they are having better luck in some communities than others. Midwives are required to offer a choice of birthplace, whether at home or in hospital, and, says Black, if they can’t get hospital privileges, they shouldn’t be practising. “There have been problems in certain hospitals, but gradually these barriers are being broken down,” he says. The goal, he and Kilroy agree, is seamless integration of midwives into the Canadian healthcare system. In this model, low-risk women who want midwives could have them, freeing up obstetricians for the higher-risk women.

“We’re making sure people have a choice and access to that choice, because that’s what it’s really about,” says Black.
During pregnancy, do your research, talk to your doctor, and choose maternity care that’s best for your risks and preferences. And if nothing goes the way you planned, well, that’s to be expected. Says Oomen: “We always said whatever gets us a healthy baby will be just fine, and in the end, a midwife did help deliver my baby girl.” This fall Oomen plans to be under the care of a midwife again when she gives birth to her second child. 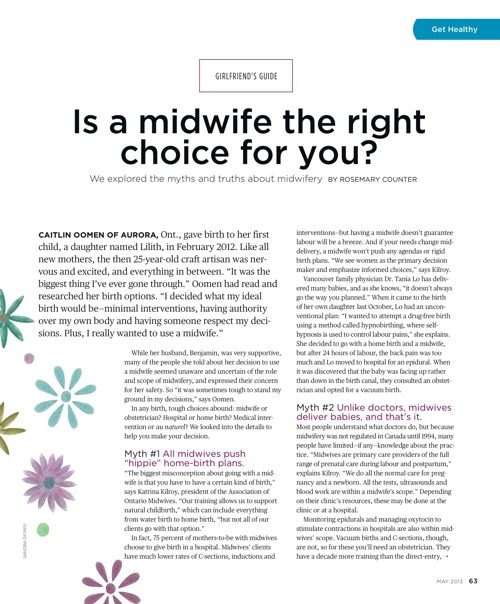 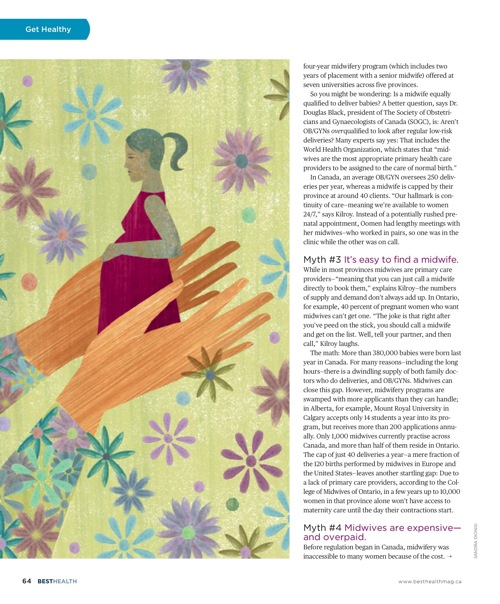 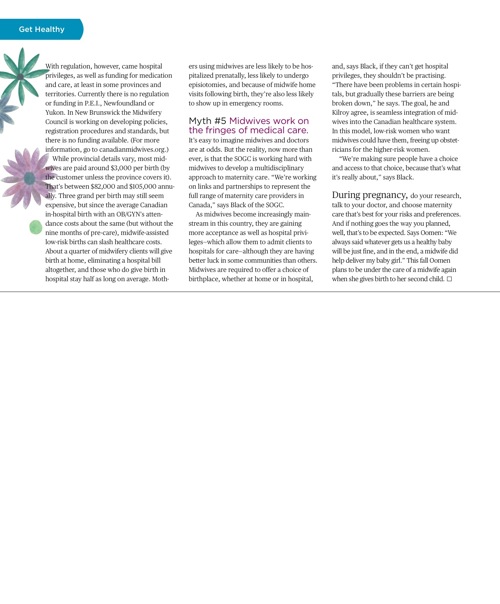