Can your name really determine your destiny?

Just ask any 13-year-old girl and she’ll tell you that she, like, totally hates her name. In my case, the name Rosemary was old-fashioned before old-fashioned was in again, hard to say (hence “Gooseberry”) and, since Mary rhymes with both “scary” and “hairy,” lends itself to some unfortunate schoolyard nicknames. Like most twentysomethings, though, I’ve slowly grown into my name. “We’re all drawn to our name in a fundamental way,” says Laura Wattenberg, author of The Baby Name Wizard. Sociologists call it “implicit egotism”: It’s the reason that you’re 100 percent more likely to read spam from a similarly named sender, why Virginias live disproportionately in Virginia and why Dennises are slightly more likely to become dentists. It also explains why roses are my favourite flower.

Vanity aside, names are important. In the past, they signalled your lineage, your profession or your locale. (Robert Pattison’s ancestor, for example, was the son of Patrick, whereas Paris Hilton’s lived on a hill.) But the simple life is long gone, explains Wattenberg. “Today, people have this idea that their names have to be distinctive.”

So, like Robert Zimmerman (Bob Dylan), Norma Jeane Baker (Marilyn Monroe) and Archibald Alexander Leach (Cary Grant), now regular folk are getting creative. When Vancouver musician John Pritchard got married, he took his wife’s last name, Haynes, because “she’s got a cool cowboy name” that works well onstage. If his parents had been alive, he says, it would have killed them. As a nod to his heritage, he chose “Texas” as a middle name, so that if “I ever get lost, people will know where to send me.”

Name changers like John Texas Haynes need only head to their provincial Vital Statistics office, fill out an application, provide documentation and pay a modest fee (ranging from a $10 application fee in the Northwest Territories to as much as $400 in much stricter Quebec).

Ki, formerly Kirsten (pronounced “Keerstin”), is a social worker based in British Columbia. Though she still hasn’t changed her name legally and answers to Kirsten to please her grandparents, Ki has never identified with that name. “Whenever I’d introduce myself, some part of me would hesitate,” she says. “I never disliked the name, but it didn’t feel like me.” At 21, the idea of “Ki” appeared. It’s neither masculine nor feminine, and that’s part of the appeal, she says. “I didn’t hum and haw for a name. It just came to me and I thought, ‘Yeah, that’s it.’”

Besides affinity, adopting a nickname may offer other professional perks too. “If you want to go into sales or politics, nicknames are tools that can help you seem friendly and approachable,” says Wattenberg. (Just compare a lovable Bill Clinton to a stern Stephen Harper.)

When a short form just won’t work—for example, if you were to call me Rosie, my mother might poison your tea—Wattenberg recommends styling your name to suit yourself. “People should wait long enough to find out who they become,” she says, “but they should also feel free to change their names.”

No one agrees more than Mumbaibased Indian numerologist Sanjay B. Jumaani. “Our name is our identity,” he says. “It carries weight and influence.” Jumaani practises a 5,000-yearold “mystic science” that aligns your name with the planets to immediately change your destiny. He is also his own success story: After 17 years of struggling to make ends meet, Jumaani added an extra “A” and his middle initial to his name to balance his numerology reading to 3—a number ruled by Jupiter, the planet of wealth. Within six months, he says, business skyrocketed. (Think a single vowel doesn’t matter? Just ask Barbra Streisand. Rumour has it that, on the advice of a numerologist, she dropped the second “a” in Barbara before she released her first album.)

Now India’s most popular numerologist, Jumaani works closely with Bollywood stars and corporations to match names with numbers that are associated with business and personal success (1, 3, 5 and 6). Eight of the 10 top-earning brands in the world (including Google, Coca-Cola and Wal-Mart) carry Jumaani’s powerful numbers, as do all of the world’s richest men. (My own reading was also a 3, making me equal parts skeptical and relieved, but Jumaani advised me not to quit my day job. “Success is a blend of good fortune and hard work,” he says.)

Imagined riches aside, would I still be me if my parents had picked an alternative name? Like most people, I’ll stick with what I’ve got. It’s familiar and easy to spell, and no Rosemarys are managed by Disney Studios. At least not yet, explains Wattenberg. “‘Rosemary’ is poised for a style comeback,” she says. “You have a name on the cusp.” 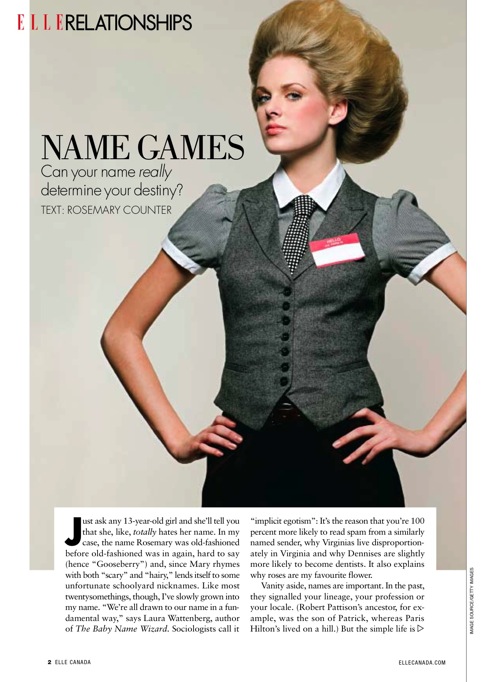 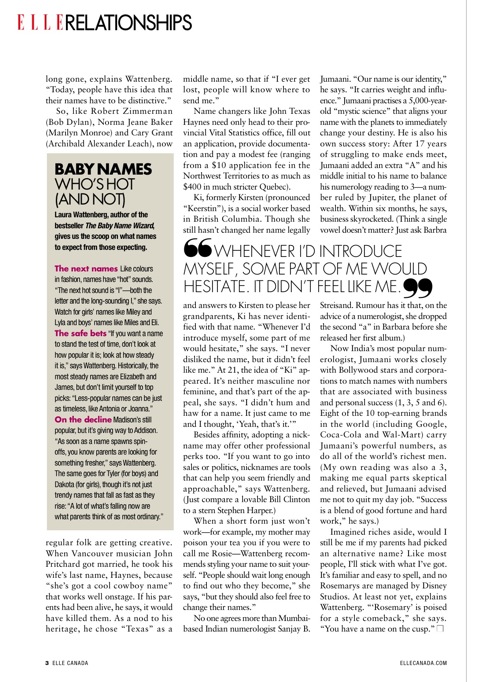