New in makeup: the bare essentials

Being caught without makeup was once a no-no for celebrities; now it’s a statement

The make-under took five minutes, and the positive feedback may have prompted Jersey Shore castmate Nicole “Snooki” Polizzi, also known for gobs of orange bronzer and mascara-drenched lashes, to strip her face of its layers of varnish and post a Twitter picture in January. “No makeup day and IDC,” she wrote, which means “I don’t care,” though surely she enjoyed the reaction: “Like an actual human being,” wrote a commenter on a celeb gossip site. “Is this a joke? She looks fantastic!” said another.

Following on the heels of Lady Gaga’s barefaced photo on the cover of Harper’s Bazaar, and Russell Brand’s pics of then-wife Katy Perry waking up in the morning, the new makeup trend is minimalist. Now editor Jane Pratt of xoJane.com has launched a new campaign called Show Us Your Morning Faces.

Normally, being caught by the paparazzi without makeup would land an exposed celebrity on the cover of a supermarket tabloid.These days, now that the perfectly applied and carefully coiffed Mad Men look has run its course, lazy ladies are in luck. Minimalist makeup dominated the spring 2012 runways, with everyone from Missoni to Stella McCartney to Calvin Klein embracing the bare face. Viktor & Rolf models wore lipstick so subtle and carefree it looked as if their lips had been stained by a pink popsicle. Celebrities who rock the bare-faced look, on the red carpet and off, include current “it” girls Michelle Williams and Jessica Chastain.

“We’ve seen a clean and polished face for a long time,” says Toronto makeup artist and Rimmel London spokeswoman Vanessa Jarman, who has worked with Drake and Lady Gaga. But when it comes to regular folk, Jarman says minimalism is a relief. “It’s great because it speaks to a ton of women who don’t want to spend 20 minutes perfecting their face every morning.”

Vancouver mom Rachel Jonat, a 34-year-old blogger, is a self-described makeup minimalist. For her, going barer—most days she wears nothing but a swipe of mascara—isn’t just a trend, it’s also a statement. “It says I’m comfortable with myself and confident in my appearance just as it is.”

A few years ago, after leaving an office job that had her in full makeup, Jonat purged her drawer of shadows and foundations. For many women, a drawer of lotions and potions is all too familiar, so de-cluttering your makeup routine is the next logical step. “It’s not just about how much I wear,” explains Jonat, “it’s about how much I have. I think minimalism is a trend because simplicity is a trend.”

And what about nothing at all? “Oh, no, no, no,” says Jarman, “never nothing.” She suggests a moisturizer and light foundation at the very least. Skip mascara if you must, but do curl your lashes. “It’s a great way to brighten the eye without doing much.”

Melissa Gibson, senior makeup artist at MAC Cosmetics, calls it “minimalist with a bit of attitude.” From New York’s fashion week, she gives a quick lesson: “A tinted moisturizer is a great starting point. Then I mix that with an opalescent moisturizer that highlights naturally and adds light. I’m also a fan of using a primer to provide a photo finish. Then I add a neutral blush.”

The minimalist trend is suddenly not so simple after all. So don’t let Snooki’s no-makeup day fool you, because “even no-makeup makeup takes a lot of product,” admits Gibson. “Sometimes it takes more to achieve less,” she laughs. 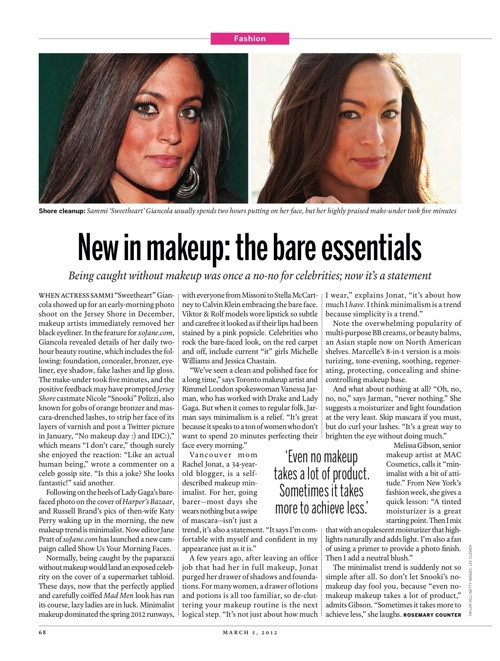