On our first night in Barcelona, my boyfriend—fuelled by adrenaline and sangria—got to talking about bloodlust. It’s just a fact of life, he explained between bites on his burger, that both men and beasts crave violence in the name of honour. I rolled my eyes.

A week later, irony not lost on me, we sat in the sweaty stands of the Plaza del Toros, the last active bullring in the Spanish province of Catalonia. Or, more accurately, it was the last bullring: on January 1, 2012, following 180,000 civilian signatures compiled by the same anti-bullfighting groups that berate us as we buy our tickets, Catalonia became the first region in mainland Spain to ban the “national fiesta.” It’s simply too Spanish—regarded as barbaric by the “enlightened” Catalonia, a conquered province with its own language and culture.

“We’re closer to the rest of Europe, and have always been more open, more cosmopolitan,” said Eric Gallego, spokesman for Prou! That’s Catalan for Enough!, the high-profile animal rights group backed by higher-profile American celebs like Alicia Silverstone and Pamela Anderson. But if they think meat is murder, they ain’t seen nothing yet.

For €35 each, three sequin-clad matadors, with an entourage of lancers and flagmen, will showdown against six enraged bulls. They’ll take turns attempting to plant banderillas, a pair of striped barbed sticks, into the bull’s shoulders. When the animal is sufficiently agitated and weakened, one swift sword thrust, a demonstration of the matador’s talent and skill, ends the bull’s life in front of our eyes. Bloodthirsty fans will shout Ole! with each brave or stylish move, cheering wildly at the triumph of man over bull.

But that’s not how it went. Instead, sparsely populated stands—feeling even sparser after the packed football game we’d seen earlier—are dotted with few distinct personae. There are burly Spanish gentlemen making bets, uppity society wives tottering in stilettos, and lowbrow spectacle-seeking tourists like us. Nearby, an English-speaking couple is on a seriously bad date. “Why would you bring me here? What would ever make you think I’d enjoy this?” she asked through tears.

The rest of us hold it in—most of the time. Gentle bulls, who sit nervously in the ring’s centre and must be prompted to fight back, are particularly heartbreaking. Angry bulls garner cheers from the crowd, and the close calls are thrilling. But when its horn gores the matador—piercing his ass cheek, no less, lifting him off the ground and tossing him like a ragdoll—we all gasp with horror. Though I’m certain we’ve just witnessed a man’s death, he limps up and back into battle for his final revenge. The one glorious kill-thrust is more like a dozen weak stabs. Then this bull, like all the others, is dragged out by horses and butchered on site.

Afterwards, the matadors loiter. A handful of fans have glossy posters they’d like signed, but mostly we just gawk as they squeeze into a dingy minivan like clowns in a travelling circus. Their glory days are done, at least in this town, but they’re moving on. Most major Spanish cities, for now, still have fully operating bullrings. 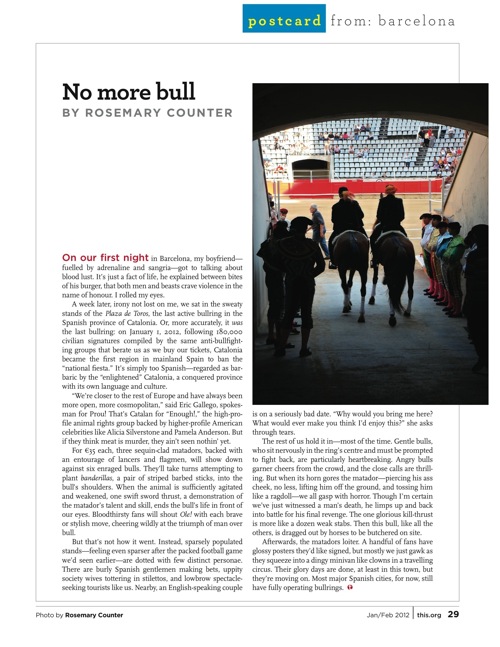