I think there’s a ghost in my room. It’s after midnight and it’s eerily calm. The moon is shining bright through the sheer curtains. I’m wired and I can’t sleep a wink. This could be the espresso, I tell myself. Or my imagination running wild. Or . . . the ghost of Dorns past.

At the crack of dawn, a girlfriend and I squeezed all our city clothes and our computers into my compact rental car, a 2014 Chevy Sonic in thematic black. With our loyal mutt, Potatoes, along for the ride, we set out on what was to be an all-girl boys weekend in Bradford, Pennsylvania.

Even for a nervous driver and a navigator who forgot her glasses, it’s an easy three-hour run from Toronto to Glendorn estate: Take the Q.E.W. to the border, merge East on I-90, catch the 219 south. Enjoy the winding roads and farmers fields until you hit the tiny town of Bradford. Then get lost, turn around a dozen times in your U-turn friendly Sonic, get frustrated and pull over at a gas station. They’ll know.

The massive 1,500-acre estate is somehow subtly tucked away between the University of Pittsburgh’s Bradford Campus and the bear-filled Allegheny National Forest. We are in the perfect spot for gun shootin’ and trout catching’. Here, we are brave.

But that was before the ghost.

“Who’s in the blue room?” asks director Stephanie Schafer over a farm-fresh omelet the next morning. “Oh God, that was me,” I admit, fearing the absolute worst: little ribbon-wearing ghost girls, whose heads roll to the floors; phone calls coming from inside the house, windows that faces look in at . . . .

Established in 1929, Glendorn is the massive compound estate of oil tycoon and patriarch Clayton Glenville Dorn, made fabulously wealthy alongside his colleague John D. Rockefeller. Ella Fitzgerald and Louis Armstrong hung out here.

Dorn, known in the city as C.G., started small, at least by Dorn standards; it consisted of the redwood lodge great house, complete with four suites and a massive fireplace. Dorn added a heated swimming pool, tennis courts and a shooting range.

Seven years later, he died, leaving Glendorn to his son, Forest, and an ever-growing gaggle of grandkids. As a wedding gift to his older daughter, Forest built “The Roost,” the 1939 cabin in which I tried to sleep.

When his daughter needed more space, he added more rooms. When Forest, himself, needed a refuge, he built a cottage, The Hideout, high atop the hill. And so it went, the Dorn family adding cabins and rooms and wings.

Today, there are a dozen cabins. They accommodate anywhere from two to 16 guests. And they each have their own character. There’s John’s manly cabin, which could double as a Mad Men set. There’s Jill’s studio, a haven fit for an artist from the ’70s, which is decked out in pastel pinks. And then there’s “The Loft,” a sleek and modern 4-bedroom addition with a games room and pool table.

For decades, the Dorns lived in a protected paradise. They threw elaborate parties, went hunting and fly-fishing. They even had a family swim team with an Olympic-level coach. Then business went bad. To chase the fortune they’d become accustomed to, the Dorns went west, reluctantly leaving their retreat. They left all the original furnishings, the old atlases, even their family photo albums. These things are stuck in time for the rest of us.

“You slept on the sheets of Lady Dorn,” says Schafer.

I’d done my journalistic rounds the previous evening at The Roost, remarking upon the fancy old silverware and out-of-date maps and handmade tapestries still hanging on the walls.
It’s these haunted vintage linens that give me the goosebumps. It’s not often I stumble upon a place with such a rich, quirky, unsettling history.

I decide to ease my heebie-jeebies with a trip to the luxe spa on site and embrace my surroundings as though I were to the manner Dorn-born. And that night, I sleep like a baby.

The Lodge at Glendorn. Rooms begin at $425/night. Winter activities at Glendorn include cross-country skiing, snowshoeing, ice-skating and snowmobiling, and downhill skiing, 30 minutes away. Summer activities include hiking, biking, tennis, kayaking, canoeing and swimming. There’s also golfing (20 minutes away) and horseback-riding (30 minutes away). Guides are available for $50/hour, and these include qualified fly-fishers. New this year, the Spa at Glendorn boasts a locally-inspired beauty treatment. (814) 362-6511, www.glendorn.com 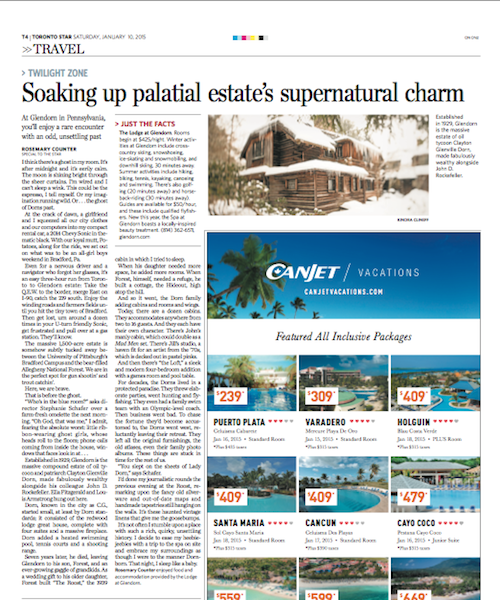