For the world’s most famous sister-in-law, it’s time to Celebrate

In defense of Pippa Middleton, Halloween isn’t quite so celebrated in Britain. “Arrange glowing pumpkins in a prominent position where they will light up windows,” she writes in her new book Celebrate: A Year of British Festivities for Families and Friends.

Also in her bag of Halloween tricks: “You can buy cobweb-effect decorations, but they are easy enough to make yourself using cotton wool.” Or try one of Middleton’s costume ideas: “Ears and a tail for a black cat” or “A pointy hat, fake hair and a broom for a witches outfit.”

The book is garnering mixed reviews. “It’s perfect for anyone who needs a recipe for making ice,” zinged the Daily Mail. But despite more than 400 pages of egg decorating and tea parties, hearty recipes for mushroom cappuccino and toad in the hole, all interspersed with dozens of photographs of Middleton’s otherwise private life, Celebrate isn’t just about the party.

“What Pippa is really doing is realizing her assets,” says Richard Fitzwilliam, a London-based royal commentator. Royals don’t usually write books, he explains, but Pippa’s not a royal, she’s the daughter of a stay-at-home mom who founded a party-supply business where Pippa edits an online magazine called The Party Times. “She must conduct herself with a reasonable amount of decorum, but she’s not technically a member of the Royal family, so she can do exactly as she likes.”

Well, sort of. Middleton, who was paid a reported $650,000 for the book, abruptly cancelled her U.S. publicity tour in the wake of her sister’s topless photo scandal. “Pippa is not doing anything for us,” said her publisher’s spokeswoman. “She is not coming here to do interviews and is not available for anything, unfortunately.”

Royal-watchers, most of whom have never heard Pippa Middleton speak, are disappointed but understanding. “This book is a great way to introduce her in a way that’s much more comfortable than throwing her in front of a reporter,” says 21-year-old Dan Whaley, a University of Winnipeg student and young monarchist coordinator with the Monarchist League of Canada. People under 25, says Whaley, are the fasting-growing segment of the league.

Introducing Celebrate—and Middleton herself—is a two-page heartfelt letter about her newfound fame. “It’s a bit startling to achieve global recognition (if that’s the right word) before the age of 30, on account of your sister, your brother-in-law and your bottom.”

For both dilettantes and celebs, event planning is a trendy gig: Four Weddings, Tori Spelling’s sTORIbook Weddings, and Come Dine With Me are all popular reality shows. “It’s cool right now to be a party planner, but most people have no clue what’s really involved,” says Alicia Keats, a wedding and event planner from Vancouver who cites stressors such as family politics as difficult parts of the job.

Nonetheless, Keats has high hopes for the book, which she plans to buy for her collection. A “big Royal family fan,” she has witnessed a huge British influence since 2011’s Royal wedding. “It’s full-force now—fascinators, fish and chips, Pimm’s and ginger cocktails, little British flags.” Keats hopes the book has some new ideas that “aren’t too far-fetched or expensive.”

While the book is simple and deliberately relatable, Celebrate doesn’t embrace the kitsch that North American’s love; it’s posh even when it should let loose. With its prim tone, the book shouldn’t ruffle any royal feathers, says Whaley. And if the palace has any sense, he adds, they’ll be supportive of Middleton’s non-Royal endeavors. “It shows the monarchy is willing to adopt new ideas and new ways of doing things.”

And as far as defiant royal behaviour goes, Middleton has proven herself more graceful than others—namely Sarah Ferguson, another pseudo-royal author. “Her deplorable behaviour is a good example of how not to behave,” says Fitzwilliam, “even that comparison isn’t fair to Pippa.”

In fact, Pippa Middleton has navigated the limelight almost flawlessly—not an easy task in the time of celebrity and new media—and it may be time to reap her reward. “The book’s is about celebrating, and you can see why she feels it’s a good time to do just that,” adds Fitzwilliam. 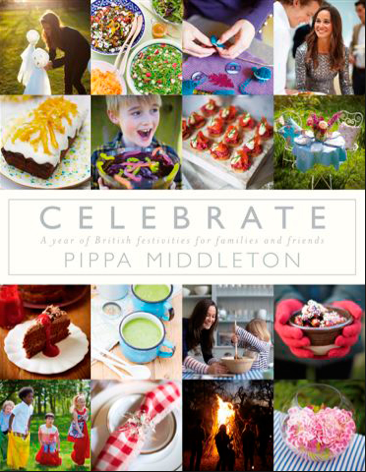