Kerry O’Reilly Wilks, one of the top mining lawyers in Toronto, credits her success to growing up in a small coastal town

Kerry O’Reilly Wilks, head of legal for North America and the U.K. at the behemoth mining company Vale, had no plans to practise law anywhere but in her home province of Newfoundland. “Bay Street seemed too busy to be my scene,” says the 39-year-old. But she knew the food wasn’t bad. So in 2000, as a recent law grad from the University of New Brunswick, she decided to visit Toronto to interview (and schmooze) at a handful of firms. “You get free dinners and drinks, you know,” she laughs.

In the interviews, she was carefree. So imagine her shock when a partner from Davies Ward Phillips & Vineberg LLP offered her an articling position. “I looked right at him and said ‘Shut the hell up.’” Though hesitant, O’Reilly Wilks agreed to give it a try — just so she wouldn’t always wonder about life in the big city.

At first, Toronto was a maze. To get oriented, she used the city’s moose sculptures as landmarks. The hours were long. She routinely slept on the oor of her o ce. But she never thought to complain: having grown up in a tiny coastal town, Placentia, she always admired the fishermen and women who worked hard and never griped. “Kerry’s all about achieving excellence through hard work,” says Kent Thomson, Davies’s head of litigation, who O’Reilly Wilks often hires as her external counsel. “At the same time, she’s easy to work with and always retains her sense of humour.”

That down-home, pretense-free East Coast charm is “so deep within me,” she says of her hometown. “Where I’m from, nobody gives a shit who you are or how much money you have.” Her parents are both grade-school teachers who taught O’Reilly Wilks to treat the janitor the same way she’d treat the teacher, a lesson she’s carried into law. “If you’re an arsehole, people remember.”

In 2005, she made partner at Davies and, two years later, after meeting him at a fundraiser, married Lloyd Wilks, a lawyer who runs a litigation-support firm. Following the arrival of their daughter Mairirois — that’s Gaelic for Mary Rose — Vale approached O’Reilly Wilks.

The thought of working on a global scale intrigued her. So she took the job with Vale, one of the world’s largest mining companies, headquartered in Rio de Janeiro. If only she spoke Rock. “It was like learning a new language,” she says.

One of her first roles with Vale was to be the head of legal for Asia and the South Pacific. Part of the job was to get mining projects of the ground by securing permits from multiple levels of government. At the time, she worked a great deal with an affiliate in Indonesia. That meant mastering foreign business customs. “Hand over your business card with both hands, otherwise it’s very disrespectful.”

The worst part of her job is when there’s a fatality in the mines. (This has happened four times in her tenure.) “I think about those individuals every day, and I know how easily accidents happen.”

Self-deprecating and immune to intimidation, her outsider qualities make her a refreshing addition to the Toronto establishment. “She brings a unique perspective with entirely different experiences,” says Vincent Mercier, a partner at Davies who has known her for 20 years.

That includes some deeply personal experiences. In 2014, when O’Reilly Wilks was 33 weeks pregnant with her second child, she was diagnosed with a life-threatening form of pre-eclampsia. The only way to save her was to deliver the baby. So her son, Malachy, was born prematurely and spent almost four weeks in the Neo-Natal Intensive Care Unit at St. Michael’s Hospital. And O’Reilly Wilks spent five days in critical care. Both made a full recovery, and O’Reilly Wilks left the hospital vowing to give back to the place that saved her and her baby.

So in July 2015, she threw a swanky fundraiser at the Granite Club, dubbed Malachy’s Soiree, which raised $300,000 for the NICU that saved her child. And it’s become an annual a air: this September, take two of Malachy’s Soiree raised $500,000, in part because O’Reilly Wilks assembled a team of legal power players — including Carol Hansell (a leading corporate lawyer), Anne Ristic (the co-managing partner of Stikeman Elliott LLP) and Marie Henein (Toronto’s celebrity criminal lawyer) — to rally the legal community to the cause.

O’Reilly Wilks has, without thinking about it much, become a towering figure in the legal community. And, though it’s not the case at Vale, in most boardrooms today she’s often one of the only women. But she hardly notices. “Honestly, I don’t really give a shit,” she says. “For good or bad, I’m quite oblivious.”

1983 In elementary school,O’Reilly Wilks plans to be a lawyer so she can get a briefcase like her dad, a grade-school teacher. “He had an awesome one that went click-click-click and I wanted one.”

1998 She graduates from Dalhousie University with a degree in neuropsychology.

2008 She moves to Vale. Her first visit to an underground mine in Sudbury is nerve-racking.“I was so nervous. Some of them are as deep as the Empire State Building is tall.”

2009 Promotedtoheadoflegal for Asia and the South Pacific, she travels to mines in Indonesia.

2015 She becomes head of legal for North America and the U.K. 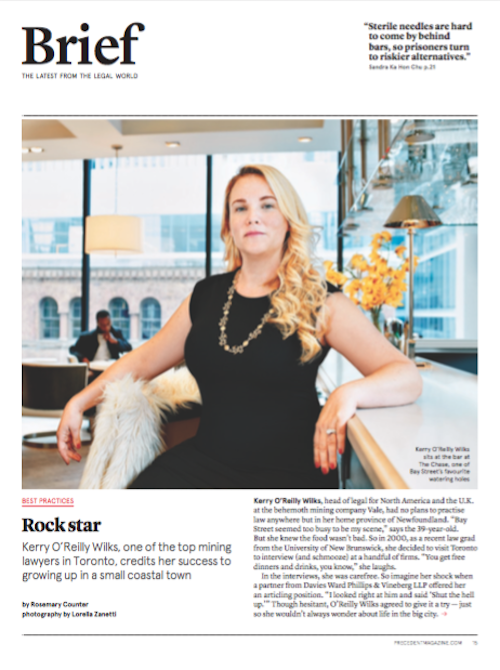 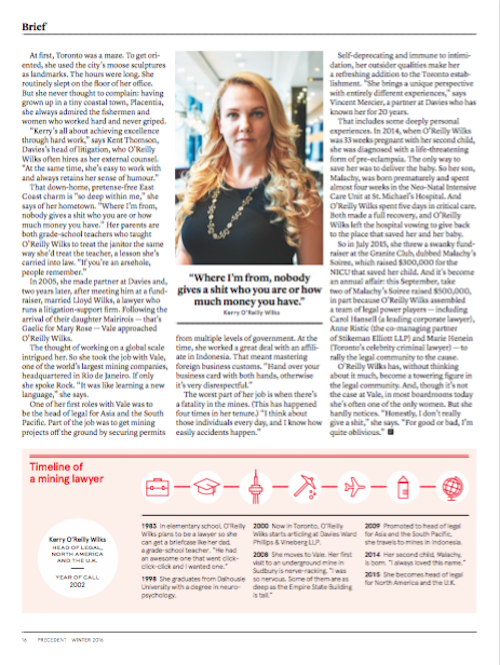