The Most Cursed Hit Movie Ever Made

Rosemary’s Baby was a hit novel that became an iconic film, only to bring woe to nearly everyone who made it.

In 1967, Ira Levin was already, by most anyone’s standards, a very, very successful writer. At 21, he’d sold two TV scripts to NBC; soon after, a Broadway play garnered a Tony nod and his first novel—in which a ruthless young man murders his pregnant lover—won the 1954 Edgar Award. But with every hit came a flop, and success always seemed to come with a cost—a theme rooted deeply in all his best works, especially Rosemary’s Baby.

A hit novel turned iconic film, Rosemary’s Baby was a massive success that, according to half a century of pop-culture lore, is also cursed. Did Levin’s tale of lapsed-Christian Rosemary, who unknowingly carries and births the devil in return for her actor husband’s stage success, really jinx all those who got near it? And if so, why did Levin himself stay so seemingly unscathed?

Like all good scary stories, this one starts out very ordinary. In 1965, struggling as always for his next big idea, Levin looked no further than his pregnant wife in their New York apartment. He plopped every would-be parent’s feelings of anxiety atop an imminent historical moment: June 1966, or 666—a.k.a. the “number of the beast,” as predicted in the New Testament’s Book of Revelation. Religious counterculture was already swirling: the Church of Satan was soon to be established in San Francisco, and in April 1966 Time magazine had just famously asked on its cover: “Is God Dead?”

Levin went even darker: What if he took the birth of Jesus and turned the whole tale upside down? What if God was not only dead but the devil lived?

A Jewish atheist, Levin nonetheless wrote with mounting reservations. He was “sort of taking notes,” he said, of his wife’s progress alongside Rosemary’s, but flatly refused to let her read the manuscript. His fears were both personal and professional; the book was blasphemy, perhaps, and Levin feared backlash, blacklisting from publishers, or much worse.

Published 50 years ago this spring, Rosemary’s Baby was instead immediately declared perfect, the best horror novel ever crafted, a modern masterpiece. Rave reviews ran in every paper. Truman Capote likened Levin to Henry James. Four million copies flew off store shelves. Levin, not unlike the greedy antagonist in one of his own success-obsessed works, was granted the wildest level of literary success that he might ever had hoped for.

Soon after, the curse began.

The first unlucky soul was Komeda. Details of his death are still scarce, but Polanski told it this way: in autumn of 1968, then 37-year-old Komeda was roughhousing at a party when he fell off a rocky escarpment and into a four-month coma—the very same affliction Levin’s witches used to kill Rosemary’s suspicious friend in the book. Komeda never regained consciousness and died in Poland the following year.

In April 1969, producer William Castle, sick with worry from the hate mail he received constantly, was suddenly stricken with severe kidney stones. While delirious in the hospital, he hallucinated scenes from the film and was said to have yelled, “Rosemary, for God’s sake, drop the knife!” Castle recovered, just barely, and never made a Hollywood hit again.

Then there’s Polanski’s fate, told and re-told into legend, even by him. Polanski had relocated to California alongside his new girlfriend, actress Sharon Tate, who was fresh off her first movie role as a witch in Eye of the Devil, just before filming began. She had gunned hard for the lead role in Rosemary’s Baby, but Paramount cast Mia Farrow. Tate instead loitered around the set, appearing uncredited like a ghost in the background of Rosemary’s young-people-only party scene and, say some, becoming increasingly obsessed with the occult. Many years later, a friend quoted her in print as having said, “the devil is beautiful. Most people think he’s ugly, but he’s not.”

Polanski last saw Tate, by then his wife and very pregnant, in July 1969, noting in his autobiography a “grotesque thought” he had at the time: “You will never see her again,” he wrote. Tate was brutally murdered on August 8 by the Manson Family, as was their unborn son—all while Rosemary’s Baby still lingered in theaters.

Unable to make sense of such a tragedy, and captivated by the stories of the Manson Family, the public took to Satan and curses as the only explanation. Internet fanatics say, like Guy Woodhouse, Polanski made his young wife a blood sacrifice for his still-untouchable status in Hollywood and beyond. Others maintain the Manson murders were a mere moment in a grand Satanic conspiracy scored by the Beatles. The White Album was written largely at an Indian meditation (with Mia Farrow in attendance). The song title “Helter Skelter,” albeit misspelled, was scrawled in blood at the crime scene. And, a dozen years later, Lennon was assassinated across the street from the Dakota—the gabled landmark where Rosemary’s Baby was filmed.

But if Rosemary’s Baby is actually cursed, how did Ira Levin dodge his fate?

He didn’t, of course. While Levin never fell from a cliff to his dramatic demise, he suffered a more fitting kind of poetic justice. First, his marriage crumbled, with the divorce finalized in 1968. (Notoriously private, Levin never gave details of the breakup, though The Stepford Wives, published four years later, maybe says it all.) He never rode the Rosemary’s Baby wave into Hollywood—perhaps a blessing in disguise—but he certainly got the fame he sought.

Catholics in particular bombarded him with ongoing criticism, as did the Catholic Church, which very publicly slapped a “C” rating (Condemned) onto the film for its “mockery of religious persons and practices.” Levin didn’t believe in witches or curses, he said over and again, yet fear grew in him just the same. On a 1980 episode of The Dick Cavett Show, appearing alongside a gregarious Stephen King, Levin sits quiet, pensive, and insecure. “I don’t recall being scared at all,” he said of his childhood horror inspirations. “Now I’m terrified.”

By 1992, in a rare interview, Levin confessed to having “mixed feelings about Rosemary’s Baby,” including religious guilt. His work had “played a significant part in all this popularization of the occult and belief in witchcraft and Satanism,” he acknowledged, while in the same breath dismissing “all these people who hear backward messages in song lyrics and stuff like that.” Then, in a rare admission of regret, he said, “I really feel a certain degree of guilt about having fostered that kind of irrationality.”

But “his family is adamant that the regret wasn’t in the book, it was in something else,” said novelist David Morrell, co-founder of the International Thriller Writers organization and former University of Iowa professor of English, who wrote a new intro to Rosemary’s Baby for its 50th birthday reissue. After decades of endless copycats and spin-offs and made-for-TV movies that made the book feel like a campy caricature, Levin grew seemingly disdainful of his defining work. He wrote less and to less acclaim, rarely did interviews, and stopped mingling among the New York literary circles he once so desperately wanted to be part of. If Levin ever really experienced or enjoyed his literary fame, he didn’t say so. “I never once heard him comment on his career or what had happened,” said Morrell. “I’m just intuiting that he had to know he was a success, but I’m not sure he did.”

Instead, when Rosemary’s Baby’s last big anniversary rolled around, Levin phoned in a poorly planned sequel, Son of Rosemary, which was widely panned and quickly forgotten. Yet it became a best-seller just the same, funding Levin’s last decade until his death in 2007 and becoming a sort of cruel ongoing joke about the fleeting and arbitrary nature of success. “Of course, I didn’t send back any of the royalty checks,” he deadpanned, poking fun at himself as a sell-out and fraud. It was one of those jokes that’s half true, and it was the last book he ever wrote. 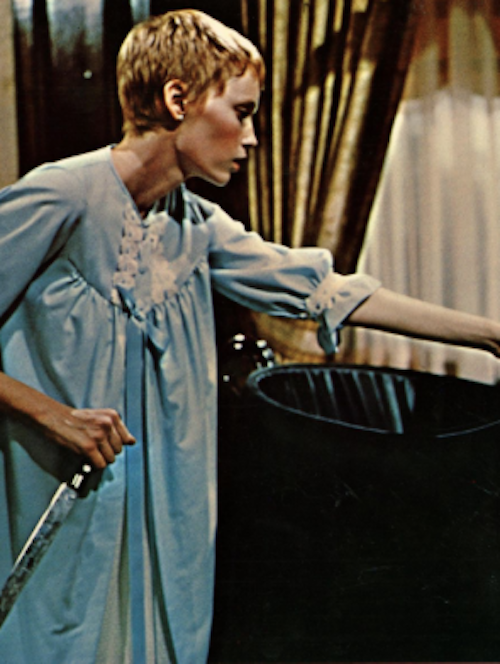